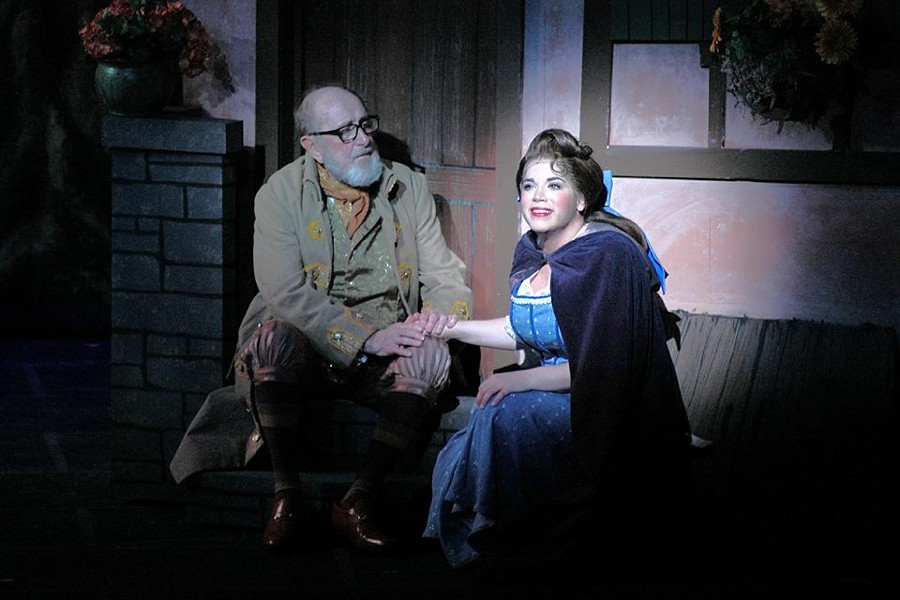 “Happily, there is some remnant of childhood in this jaded public. It is this childhood we must reach. It is the incredulous reserve of the adults that we must overcome.”
― Jean Cocteau on his film version of Beauty and the Beast.


There’s a difference between staging a classic fairytale and staging the Disney version of a classic fairytale. When one leaves the public domain to dance with branded content, there are certain obligations (not to mention expectations) to forego interpretation and adhere, as much as possible, to visual tropes and character traits established by Disney in a growing catalog of adapted animated features. In other words, you’re supposed to faithfully recreate beloved cartoons on stage. Large talent’s a must, obviously, and some ingenuity is always required. But as long as you can figure out a way to raise enough money to rent a Shrek head, or build a giant whale mouth, all the creative stuff’s been taken care of for you by Uncle Walt’s magnificent i-merch-a-neers. So it’s rare to see a company really stamp a Disney musical and make it their own. That’s what makes Theatre Memphis’ production of Beauty & the Beast a little extra special. It’s very Disney, with bits borrowed from both the animated feature, and the Broadway extravaganza. But director Amy Hanford has tweaked the tone ever so slightly in the direction of horror and hallucination and, in doing so, she’s gifted Memphis with a densely entertaining production that instantly calls to mind the source material, while glistening with its own dark appeal. Even if you’re not a fan of the show or musicals generally, it’s hard not to be seduced by such overwhelming spectacle, and a formidable cast whose abilities won’t be eclipsed by applause-inducing costumes or lush scenery.

Hanford has always displayed a comfortable familiarity with the mechanics of a blockbuster Broadway musical. She's also had trouble infusing her finely-imagined automatons with the spark of life. To that end, Disney’s beastly tale of surface to soul relationships, represents an enormous leap forward. It’s not just lively, it’s alive and full of weirdness and wonder.

Whether she’s singing about books or taming the beast, Ashley McCormack owns the stage as Belle. And although he’s never as menacing as he could be, Charles K. Hodges’ big baritone is well-suited for the monster’s role. As Gaston, a self-aware critique on traditional Disney heroes, Philip Andrew Himebook is large in every sense of the word. His enormous voice being rivaled only by similarly enormous acting choices that make him the most animated thing on stage.

Hanford also gets fine performances from ensemble players, particularly the Beast’s servants who are all being steadily transformed into household objects — a candlestick, a teapot, a wardrobe, spoons, knives etc. “Be Our Guest,” the servants’ big number about generous hospitality, bubbles like fine French champagne overflowing its glass. If there’s one good reason to produce Beauty & the Beast live, it’s the challenge of staging, “Be Our Guest,” and from the cartwheeling rug, to glittering mylar confetti, and all the rest of Travis Bradley’s fine choreography, Theatre Memphis doesn’t disappoint.

As is often the case on Perkins Rd. Ext., the real stars of this show are the designers. Lights, sets, and costumes have all been crafted to overwhelm audiences while elevating the actors and never overshadowing them or a text/score combo that’s more popular than worthy of such fuss.

For better and for worse Theatre Memphis has been something of a one-size-fits-all shop lately, with a “more is better” ethos that’s smoothed defects in shows like Young Frankenstein and The Addams Family, making troubled brand cash-ins better than they deserve to be, while inflicting considerable damage on more intimate shows like Gin Game and Sondheim’s anti-blockbuster Into the Woods, which wants to be more cubist Modern than Disney-framed contemporary. In a diary he kept while filming his own iconic version of Beauty and the Beast, French filmmaker Jean Cocteau wrote of a constant regret he felt after cutting “bits of intense poetry” from the screenplay. But regret was tempered by his understanding that, “one mustn't, at any cost, be seduced by an attractive idea if it hasn't got its right place.” It’s good advice in any case, but especially good for an institution that, for all of its good intentions, can fall into the consumer’s trap of mistaking extravagance for excellence. But they’ve struck gold with Disney’s Beauty & the Beast. It’s an indulgent piece of candy to begin with, and Theatre Memphis stuffed its production with golden tickets, and wrapped it in sparkling layers of old fashioned razzle dazzle.

It’s all too sweet for my buds, but will almost certainly keep box office phones ringing. So if any of this sounds remotely interesting to you, I’d reserve tickets now. I suspect word of mouth will soon make them a scarce commodity.