December 26, 2016
comment
The drama of another year is playing out its final scene. It would normally be time to look back and remember the good, the bad, and the ridiculous. But, if I'm reading the social media tea leaves correctly, 2016's been a bummer for everybody, so I'm going to do something completely out of character and only highlight the good stuff.

While I aim to see everything, and do see most of the shows produced in Memphis, I inevitably miss some things along the way. GCT's Ostrander-winning production of A Streetcar Named Desire, for example, might have made my year's end list if I'd seen it. Or maybe not, hard to say. This list isn't supposed to be definitive. It's a collection of things that spoke to me, surprised me, moved me, and made me laugh. Feel free to add, detract, or share your own lists in comments.

"It’s not an uplifting play, this story of Dr. Juliana Smithton, a biophysicist developing drugs to treat dementia, while losing her grip on reality. She has brain cancer. Or maybe she doesn’t. Her husband is screwing around and filing for divorce. Or maybe he's not. Her daughter’s dead in a ditch somewhere, or maybe she's at the bottom a the river sleeping with the fishes, or maybe — just maybe — she’s dropping by the family’s second home and bringing the twins to visit grandmother. "


2. The House That Will Not Stand: A fantastic script based on Lorca's House of Bernarda Alba. Betting this one picks up some Ostrander nominations next summer. And an award or two.

"Set in New Orleans in 1813, a short decade after the Louisiana Purchase, House is, in part, about the Americanization of French Louisiana where communities of free blacks flourished. Men and women, once able to walk the streets without papers, could be stopped by authorities and enslaved. With this change in dynamics — all tragic contemporary resonances considered — came other changes to culture and tradition. The House That Will Not Stand touches on many things, but is essentially a twisted, sometimes terrible Cinderella story built around an old, decaying practice of French colonials taking black common-law wives. There is a (possibly) wicked mother, who only wants to protect her three girls from the new system, keep them out of the old system, mind her interests, and serve the occasional slice of pumpkin pie."

3: Charles III: Missed opportunities in staging were more than balanced by solid performances and a clever, confident script that out Shakespeare's Shakespeare. Like The House That Will Not Stand, this one's got play prizes in its future.

"Mike Bartlett's deliberately (and delightfully) Shakespearean King Charles III is a history play about things that haven't happened yet. It's also one of the more interesting, and innovative scripts to make rounds in ages. It begins with somber candles, and a sad eventuality — the funeral of Queen Elizabeth II who, in real life, is still very much alive, but a relative short-timer at 90-years and ticking."

"I’m not going to say too much about Rick Elice’s sprawling — sometimes too sprawling — Peter Pan origin story, because it’s a show where the journey really is the destination. I’ll merely note that it begins with two tall ships sailing in different directions to a common destination. One ship carries a mysterious trunk, some British seamen, and a bunch of pirates. The other carries young boys destined for slavery, the daughter of a British seaman, an identically mysterious trunk, and a passel of seagoing scoundrels. It ends at the beginning of a legend we already know, about the immortal Pan locked in his forever battle with a wicked, one-handed brigand. Between times there’s swashbuckling, glib banter, vaudeville routines, a song or two, and just enough gut-honest acting to keep things real."


5.Byhalia, Mississipi: One of the best reviewed plays of 2016 has deep Memphis roots. 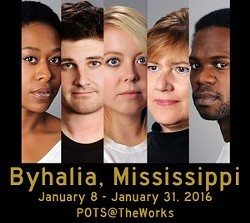 "Jim, [Evan] Linder's philandering male protagonist, is what passes for "post racial" in the American South. Evan McCarley plays him as a laid back good ol' boy who can't understand why Ole Miss abandoned Col. Reb, but "some of his best friends "... etc. The play trades old Jim Crow stereotypes for new Jim Crow stereotypes so Jim, an unemployed construction worker faced with the prospect of taking a job at Walmart, isn't frothing at the mouth because his wife slept with an African-American. Sure, he immediately assumes the worst of his best friend Karl, but, end of day, the baby's blackness is only an issue because it's an indelible mark of Laurel's infidelity. It makes her mistakes worse than his own because her mistakes can't be swept under the rug. Pop culture's usual cartoon rednecks who hate on women and do racist things because they're cartoon rednecks have been replaced here by something more banal. And more awful. Something that loves you like your mama. Something that hides behind heritage, embedding itself in values and institutions where nobody will look because looking is rude."


6: Beauty and the Beast: This wasn't a great year for musicals in Memphis. In some cases extravagant extravagance underscored flaws instead of hiding them. And God only knows what went wrong with The Wiz. Playhouse on the Square did good work with less than stellar material like Sister Act and Memphis' namesake musical. Only one song and dance show really delivered the goods start to finish.

"There’s a difference between staging a classic fairytale and staging the Disney version of a classic fairytale. When one leaves the public domain to dance with branded content, there are certain obligations (not to mention expectations) to forego interpretation and adhere, as much as possible, to visual tropes and character traits established by Disney in a growing catalog of adapted animated features. In other words, you’re supposed to faithfully recreate beloved cartoons on stage. Large talent’s a must, obviously, and some ingenuity is always required. But as long as you can figure out a way to raise enough money to rent a Shrek head, or build a giant whale mouth, all the creative stuff’s been taken care of for you by Uncle Walt’s magnificent i-merch-a-neers. So it’s rare to see a company really stamp a Disney musical and make it their own. That’s what makes Theatre Memphis’ production of Beauty & the Beast a little extra special."

"To borrow a line from Shakespeare's titular boy king, "The fewer men, the greater share of honor." I suppose that means there's plenty of honor to go around for the 10 hard working actors taking on every role in Tennessee Shakespeare Company's Henry V, handsomely situated on stage at the University of Memphis...".

8: Compleat Wrks if Wllm Shkspr (Abridged): Comedy really is hard. You wouldn't know it though watching this seemingly effortless romp.

"Don’t go to Theatre Memphis’ production of The Compleat Wrks of Wllm Shkspr (Abridged) unless you like good acting, stupid gags, and Falstaff-sized belly laughs. It’s a perfectly entertaining night in the theater, and I’m more than a little surprised to find myself typing those words. I’ve never been a huge fan of the Reduced Shakespeare Company’s signature piece with its abundant (sometimes dated) pop culture references, and glib approach to the material. But Theatre Memphis’ production is completely current, with enough heart to comfort like sunshine after rain."

9. (Tie) I Hate Hamlet and One Ham Manlet. Do we overproduce Shakespeare and Shakespeare by-products? Love it though I do, I sometimes think so. More accurately (and troublesomely), we cynically ignore big chunks of his oeuvre while wearing out a narrow spectrum of hits. 5 plays on this short list are Shakescentric  and three of them — including the Compleat Wrks — are mostly about Hamlet. Good news: It was all a joy to watch.

If you only see one one-man Hamlet this season, make it One Ham Manlet. It's a joy for Shakespeare lovers, but also a fantastic entry point for skeptics, who think they should know a little something about the celebrated tragedy, but can't bring themselves to commit to the full four-hour show.

It seems silly to write it down, but tastes have changed quite a bit since John Barrymore's days on the Great White Way. There's not much room in the modern theater for the kind of disposable material I Hate Hamlet aspires to. Jokes fall flat. Characters annoy. But just when it feels like the play's about to devolve into a live action version Three's Company, Rudnick's comedy — aided by director John Maness and a terrific ensemble — taps into something genuinely Shakespearian.

10. Sister Act: One of the most appealing shows I've ever actively disliked. Proof that good theater is often greater than the sum of its parts. There's dialogue in Sister Act that makes me cringe, and I'll count myself lucky if I never have to sit through this musical again. It made my list because I believe in giving credit where it's due. Designers and performers understood that they had one job here — to entertain. Nailed it.