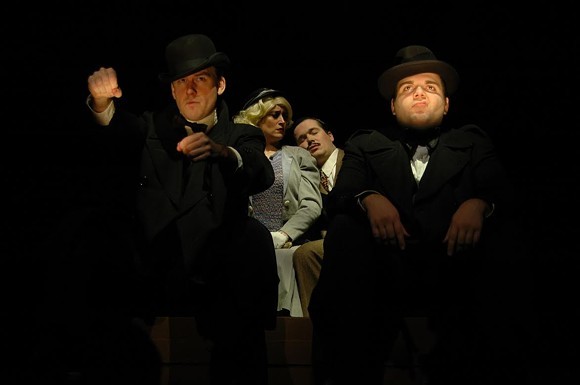 Style only goes so far. But sometimes "so far" is a long, long way. Theatre Memphis' take on The 39 Steps, an homage to cinematic suspense, murders any opportunity for tension or coherent storytelling, but the wounds bleed laughter. Style and some very good acting carry the day even when it's impossible to follow the plot. At every surprising twist and unforeseeable turn it looks great doing whatever it is it does.

The 39-Steps is a tough proposition. It's a balancing act between Hitchcocky storytelling and self-aware gags in the vein of a Seth Macfarlane cartoon. Only, instead of Family Guy's celebrity drop-ins, be on the lookout for allusions to other films, particularly those by the old master himself. Add to all that an impressive stunt factor:  Four actors  play somewhere in the neighborhood of 140 characters, revisiting events from movies that should be impossible to recreate onstage. Airplane chases, anybody? (Airplane chases anybody?)

Director Tony Isbell has built a chaotic clown show, chock full of cheap theatrics and owing as much to the Marx Brothers as it does to Hitchcock. Of course his cast of clowns are deadly serious, especially when they're being absolutely ridiculous. The show's train-top chase is a purely theatrical joy, as is the climactic moment when the villain is flung from the balcony. And if you think that's a spoiler, you may not fully grasp the fact that the plot just does not matter here at all. Besides, while unessential, it's more fun if you've seen the film already. If, by some chance, I've now spoiled the film for you, it's like 80-years-old, you had your chance.


The 39 Steps  tells the story of an ordinary, if almost impossibly handsome Londoner, who, while going about the everydays, stumbles bum-behind-teakettle into rollocking spy-infested misadventure. This go-round said Londoner is played by Kinon Keplinger, and it's a perfect fit. Keplinger's a versatile character actor trapped in the person of a lost-in-time leading man. He's a solid anchor — the one actor not jumping from role to role, holding all the play's threads together , even when things threaten to become unmoored.

Gabe Beutel-Gunn, Lena Wallace Black, and Chase Ring play everybody else with an eye toward the original film, and heel toward the banana peel. But not really. I'd never spoil a good banana peel gag.

I don't know how well the 39-Steps works in Theatre Memphis' big space. It's a big little show. It wants to be big, and it looks great on the stage. But it's also a show that benefits from intimacy. It wants to include the house, and Isbell's hyper-aware production ups the ante on all that. The deep, narrow space with its gulf between upper and lower seating doesn't prevent this sort of thing, but it's not ideal either.

The 39-Steps is one of those shows where pieces outshine the whole, and the gags are the best thing going. To that end it's a little like vaudeville. And, as the setting should make perfectly clear, it knows it.