Rules for Radicals: "Blueprints to Freedom" is Right on Time 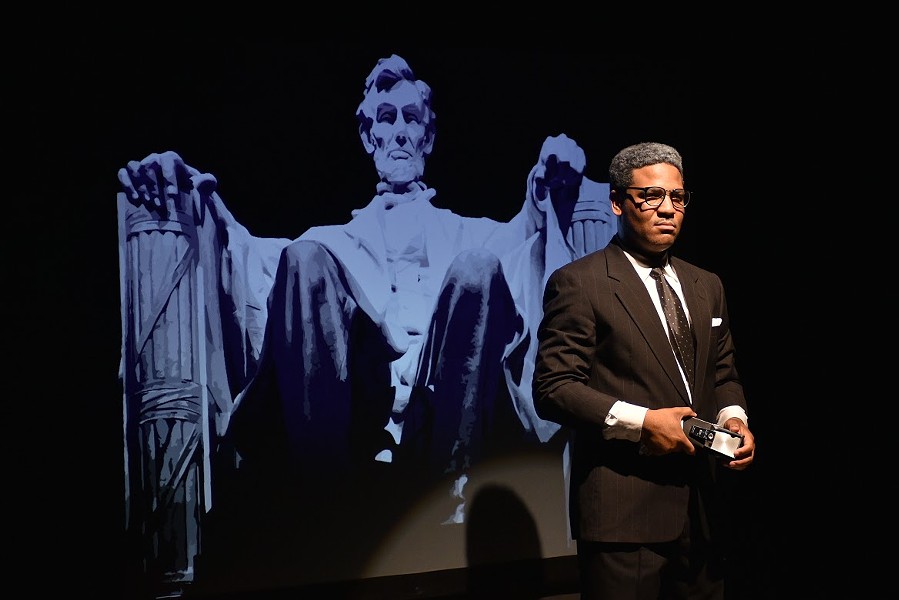 Blueprints to Freedom has its share of resonant moments. But, in this peculiar place we occupy in spacetime, nothing rang out in the theater like this four word question — "Why do we march?"

Michael Benjamin Washington's ambitious portrait of  Civil Rights organizer Bayard Rustin, zeroes in on a singular moment in history. But what went down in the hot summer of 1963 didn't stay in 1963. The historic march for jobs on Washington D.C. was attended by 250,000 people, creating magnificent ripples that still rock us today. The play is celebratory. But it's also cool, conflict-ridden and circumspect.  It shows Rustin, King's mentor in the ways of nonviolent protest, in exile, but still  the intellectual center of a coalitional movement grasping for unity. In the era of Black Lives Matter, Washington's soul-searching history, also forces us to consider whether or not the "protest or politics" choice Rustin and union leader A. Philip Randolph present is a false dichotomy. As the late Judge D'Army Bailey often suggested, as an early advocate for the creation of a National Civil Rights museum, maybe activism is always in season.

American politics have always failed to account for class issues at the intersection of race and gender. Blueprints to Freedom is especially good at showing intersectional tensions inside the movement, with special attention paid to the predicament of being a minority inside a minority: Women, atheists, gays, etc. The communist-affiliated Rustin had been to jail for draft dodging, and for being homosexual, which made for easy propaganda, and an uneasy relationship with Martin Luther King and other movement leaders. All anybody had to do to spread discredit was go on the radio, name names, read charges, and infer, infer, infer.

Washington's play is also very good at showing Rustin's complicated relationship with physical sex, and how he found discipline, and motivation in faith, even when he was deeply skeptical, and unable to find the light or hear the still, small voice. It's especially satisfying watching Bayard — a Quaker whose faith walks hand in hand with a widening skepticism — sparring with MLK over which Biblical character they're most like, and how that rhetorical bedrock defines their tricky relationship.

The Hattiloo gets things done, but the production feels like an unfinished sketch — Roughed in and a little bit stilted. Even a beautifully executed piece of multimedia that takes the audience on a documentary tour of the '63 march stops the show in its tracks. Ultimately strong characters, strong writing, committed actors, and one hell of a timely story about complicated alliances, secrets, sacrifices, and hard choices wins the day.

Courtney Williams Robertson struggles to find his center as Rustin, but grows into the role as the narrative unfolds. It's an unassured performance that still strikes many of the right chords. He is especially good in scenes where Rustin explores faith, not as a matter of passive certainty, but active process.

Tim Flowers and Charlton Johnson are effective as Randolph, and King. Like Robertson, it takes Johnson a little time to warm up to his role. But he's also a real life minister, and when he works up a good head of steam, there's a mix of vulnerability and authenticity to his cadences that transcends simple imitation. Strong stuff in fits and starts.

Hattiloo regular Bart Mallard is typically capable, if maybe a little too predatory-seeming, as Davis Platt, Rustin's white lover, who can't square any struggle for freedom that means he has to keep hiding and pretending. Mallard is a confident performer, and a grounding presence on stage. When he's in the game things move. Stakes become evident, and choices get made. The same is true of Maya Robinson, who never fails to find the humor or the humanity in her characters. She's a perfect fit for Miriam Caldwell, Rustin's atheist, feminist, single mom intern.

The Hattiloo has been on a roll with strong shows like Mr. Rickey Calls a Meeting, and The House That Will Not Stand — easily the most fulfilling thing the company's produced since Hurt Village rocked its old, shop-front space to the foundation. To that end, Blueprints to Freedom, which could be fluid and majestic, is stiff, with visible seams and a projection screen that ripples like a sail in a gale. The one constant element — and probably the most important — is top notch content programming.  As was the case with The House That Will Not Stand, Blueprints is a show with a lot of life still ahead of it. We haven't heard the last of it.

So, back to the original question: "Why do we march?" There are a lot of answers, I guess. The first may be to find out who we are. The second is to show everybody else — or remind them — whether they like it or not. The rest is politics.