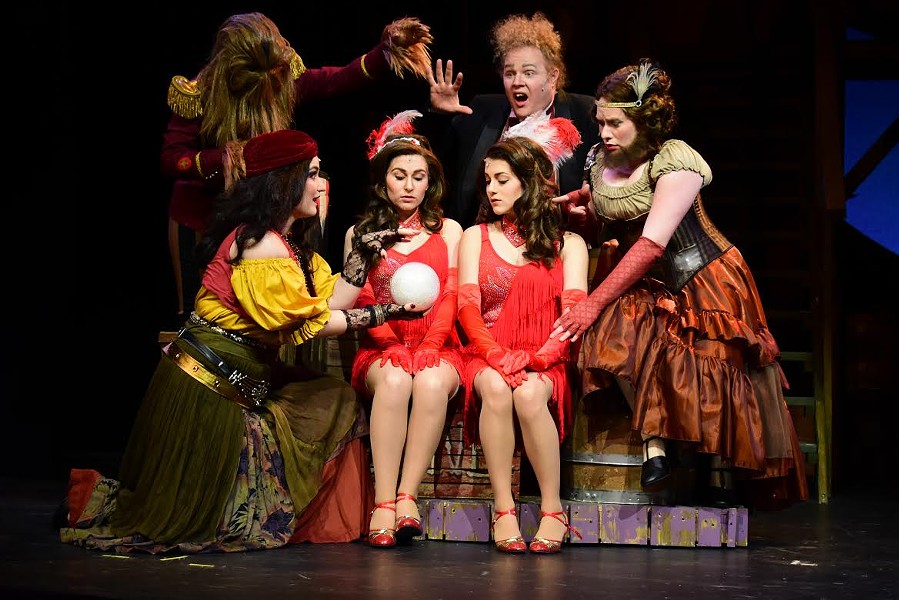 Side Show's got it all — great voices, great design, and a great story to tell. It doesn't really capture the hell conjoined twins Violet and Daisy Hilton lived through and only hints at a life where every relationship is abusive, reducing a horrible existence to so much irony and failed romance. But for all of its missed opportunities, this circus musical cuts to the core of everyday insecurity. Who hasn't felt like everybody was staring at them and asked "Who will love me as I am?"

Theatre Memphis — and its audiences — have an apparent fondness for the creepy, kooky, mysterious and spooky. The City's elder company has experienced success with knockout productions of less than stellar creepshows like The Addams Family, and the musical adaptation of Mel Brooks' Young Frankenstein. With Side Show TM gets to revisit the conceptual well, but with much better material to work with.


Side Show's painted in broad strokes. It's opening sequence — one of the most compelling in the history of musical theater — introduces three legged freaks, and pinheaded geeks who'll bite the head clean off a bird's neck. It brings us into a world that is, and is not our own. We meet sympathetic curiosities, and the nightmare carney who keeps them working for little more than the abuse he dishes out for pay. And we meet the star attractions, Violet and Daisy, who are identical, bound by flesh, and nothing alike. Unfortunately for the musical, Side Show peaks in this opening sequence. Still, what follows remains engaging, in part — and in the spirit of the old 10-in-1 tent shows — because it's real. This happened, more or less, and the show's tragic symmetry ultimately stresses the bitter in a bittersweet show at the edge of exploitation.

Director Ann Marie Hall has an affinity for quirk, and stories that walk on the dark side. She and Side Show are a good fit, and the ensemble cast she's assembled is loaded with solid actors and big voices. It's tempting to overhype the very fine solo/duet work of Dani Chaum and Gia Welch as the inseparable sisters, but that would be wrong. But for the moments when they're alone onstage — and fine moments they are — this is a group effort, and everybody delivers.  Chaum and Welch, like the Vaudeville stars they play, just deliver a little bit more.

With the simplest gestures, Theatre Memphis' designers have turned the entire main stage space into a big top. The effect brings everybody into the same big tent for the show's duration. It's a neat, easily-accomplished trick that says so much about the nature of this show, and how audiences are meant to receive it. Good stuff.