Boy oh boy do I ever love the energy at late shows starting at 11 p.m. and midnight. Audiences tend to be younger. Folks have already been out for a while, and they bring that good-time momentum with them. The room vibrates with it before curtain time when it spills out onto the stage. You just know something mad is about to happen. Something exactly like Collective Rage: A Play in 5 Betties. (Originally A Play in 5 Boops).

Oh sure, they had shows at all the normal theater hours too. But I hit the late one, and it did not disappoint.

Normally I don't review shows that have already closed. What's the point? But this fine, fine show was here for such a short time and I really wanted to say a few words about the producing body Femmemphis, and a giddy, smart, stripped to essentials piece of theater so portable they could do it at birthday parties if they wanted to. Although that would be weird. Loosely inspired by Betty Boop, the cartoon flapper who's always fending off wolves and cat callers, (and also by A Midsummer Night's Dream) Collective Rage is a daring comedy of self-discovery and a perfect antidote to the toxic last hurrah of old, white, Viagra-fueled, cisgendered nut-rage. It's also a sly critique of an insane and irresponsible media landscape comprised mostly of outrage with vivid splashes of abject horror.

You know the thing women have that Donald Trump grabs with impunity because he's a celebrity? That's what Collective Rage is all about. And the male gaze. And the female gaze. And expectations, appearances, disappointments, truck maintenance, cocktail parties, boxing, love, loss, trial, error and ultimately, "the THEATRE!" Jen Silverman's script is as savage as it is humane, and Femmemphis' terrific cast — Kristen Vandervort, Jamie Boller, Christina Hernandez, Eileen Kuo, and Brianna Hill — devoured it like pie.

The stated mission of Fememphis is "to champion all womyn by empowering and promoting the female artistic voice in the Memphis community." Collective Rage was a fantastic place to start, and I can only hope  the show's requirements are so few  it will have a life beyond its single week run at the U of M lab theater. It's something that could attract attention over an extended run, and the kind of show some folks (like me) would happily see more than once. Even if this one doesn't come back, this collective is one to watch. Priorities are all in the right place — good material, detailed performances. Who needs fancy design when you can't take your eyes off the actors? 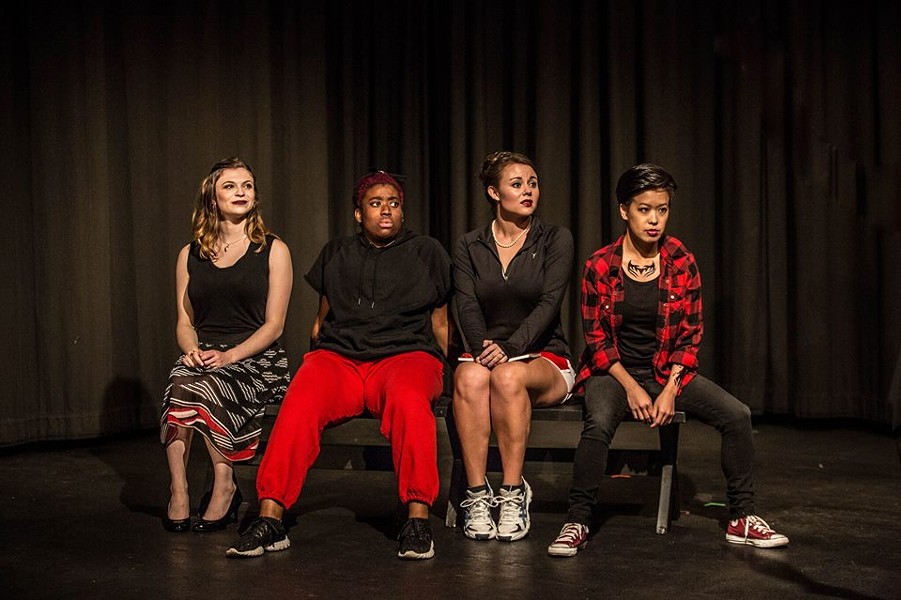 If I was reviewing this in real time I might grumble that there's a lot of cool and distinctive group movement  in the old Max Fleischer cartoons, and it's a shame some of that couldn't be folded into the show's transitions. Isn't that just like me to complain that a very good thing wasn't somewhat better?  But I'm not really complaining so much as imagining a more interesting future with this brave, smart, and giving group of performers in the mix.