A Memory of Charles Billings

Synchronicity's a bear sometimes. Over the past month I've been cleaning the clutter from closets, drawers, and cabinets at work and home; disposing of all those things I thought I needed to keep but really didn't, and finding special places to store all the trivial nothings that grew into meaningful somethings while I wasn't watching.

One of the things that turned up was a handwritten missive from Waynoka Ave. in the 38111 that began, "Dear One...". Even if his name hadn't been embossed in red at the top of the card I'd have known in those two words, this was was a summons from Charles Billings — actor, vocalist extraordinaire, and the longtime voice of WKNO. He'd enjoyed my 2009 guest appearance on Michael Feldman's show Whaddya Know? and couldn't wait till he saw me in person to tell me. The note ended with an invitation, "Come have a drink with me at The Grove Grill soon," and his phone number, which I realized wasn't in my current contacts list. So I immediately logged it into my phone thinking I'd surprise him with a call sometime soon.

We'd communicated now and then, but there hadn't been a proper bull-session since right after he'd sent that card. I'd heard rumors of health issues and have been trying to be better about staying in touch with old friends — particularly the people who sometimes come into you life that you may not see all the time, but whom you sometimes just want to write or call out of the blue to say, "Dear one...".

Charles was such an integral part of Memphis' cultural life for so long there's no good way to condense his accomplishments into a paragraph or two, so instead I'll share my earliest — and frankly, my weirdest — memories of one of the most charming, gracious, and talented people I've ever known. Whether he was acting in dramas by Arthur Miller, Leonard Bernstein musicals, or belting one out for Opera Memphis, Charles made everything look effortless. Nothing impressed the younger, only recently urbanized, me half so much as the way he could sit down to the mic at WKNO, drop his deep, honeyed Southern drawl, and wrap his tongue around the names of all those classical composers. Fresh out of farm country, this very nearly astonished.

Since the bad news broke, people have posted many photos of Charles wearing tuxedos and suits but, honestly, I can't think of him without seeing the man sporting 18th-Century British military drag with a sparkling rhinestone tiara perched atop his thinning, close-cropped hair, wearing a devilish, grinch-like smile bookended by a dangling pair of rhinestone "ear-bobs."  It's an imprinted memory from 1986, when we were both cast in Betty Ruffin's production of Richard Brinsley Sheridan's Restoration comedy, The Rivals. These sparkly items, left over from some past show, were worn for our enjoyment, and to let everybody know it was backstage story-time and Prince Charles would be holding forth. Until his next scene, anyway. This was my very first show in Memphis and my first opportunity to learn from professionals — like the man with the booming baritone voice wearing the tiara whose commitment to excellence combined with wild and wonderful offstage antics to teach a young aspiring actor some valuable lessons about fearlessness and freedom.

Now, because I've never known how to write a proper obituary, let me share an off-color story.

The Rivals is probably most famous because of the character Mrs. Malaprop from whom we get the expression "malapropism" — an accidental insertion of wrong, similar words into common phrases with humorous results. Naturally, during down time between scenes, the cast made its own modern malaprops built around lines in Sheridan's script. Mrs. Malaprop's already bungled Shakespeare, "A station like Harry Mercury,"  became, "A station like Freddy Mercury," while Charles' line to a disobedient son, "Damn me if I ever call you Jack again," was given a decidedly NC-17 twist. I'll leave the actual change to the reader's imagination, but suffice it to say, it was naughty. It was silly. It made good use of the word Jack, and it was all in good fun until the night Charles, in the rarest of rare moments, became tongue tied and very nearly said the adult "backstage-only" variation in front of an audience. Keeping a straight face was difficult for everybody.

"I'm gonna get all y'all," he said, bursting into the green room beet red, and snickering like a school boy who'd just split his pants.

I mention the dirty joke both because it's so inextricably woven into my own origin story as a theater person who fell in love with the live-ness of live theater, and to contrast with the other thing I so strongly associate with Charles Billings — his vocal interpretation of  sacred music. He was the kind of singer literally able to shake rafters while inserting incredible nuance into every phrase. It was a powerful, revealing, and otherworldly voice that made it easy to imagine other, better worlds.  If I had only one sentence to summarize the man - very nearly a myth in local arts circles — I think I'd skip all the usual and well-deserved lines about gentility, elegance, generosity, etc. and go with something a little more hypostatic.

Charles Billings was fully human and he was entirely divine. He'll be missed. He already is. 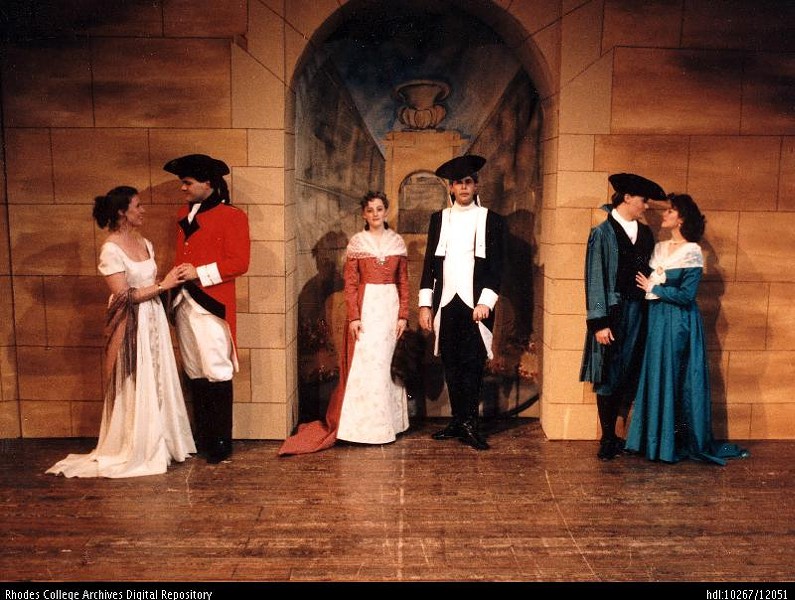