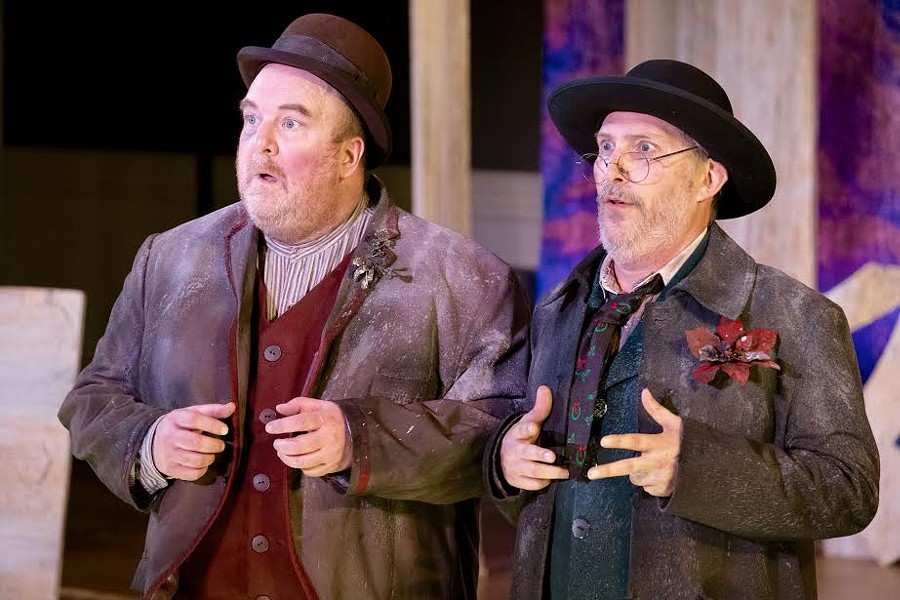 "That’s what we’ve got to do – wait on God and let this process play out. … Let’s go home and sleep on it.” — Roy Moore, Good Christian, apparent pedophile, awkward cowboy, sore loser.

“Was I sleeping, while the others suffered? Am I sleeping now? Tomorrow, when I wake, or think I do, what shall I say of today? That with Estragon my friend, at this place, until the fall of night, I waited for Godot?” — Vladimir, Waiting for Godot.


I awoke yesterday morning to the news of Roy Moore's narrow defeat in the Alabama Senate race and of the disgraced politician's threat of voter recount. "That's what we've got to do," Moore said, turning to the never-present Authority-on-high. "Wait on God and let this process play out. … Let’s go home and sleep on it.” Of course, for Moore, the process had already played itself out, but like Samuel Beckett's authoritarian character Pozzo, he was unable to see it. Stumbling across such familiar-sounding words so early in the morning reminded me that I had a Waiting for Godot review to write. So I suppose it's time to begin.

There was a terrific audience out this past Saturday night at the Dixon Gallery & Gardens. They'd come out to see a Beckett play.

I didn't know what city I was in. Or whose life I was living. Because this is something that never happens in Memphis. I do know this though: Tennessee Shakespeare is doing something very right — even if that something isn't Waiting for Godot.

I love this material. And appreciate a thoughtful holiday present like Godot during the bleakest  time of year for theater-lovers, when every other playhouse in town is engaged in the age-old ritual of re-gifting. But the ensemble brought together for this well-meaning production never quite gels. Concept intrudes. Comic opportunities are missed and meaning gets steamrolled on the regular. And, to come right out and say it, turning Beckett's boggy wasteland into Narnia is a strange choice. It may appeal to others, but it's never going to sit right with me. Now, having made my complaints this must also be said: If you can  fill the house on a Saturday night for any Beckett play, I’m going to stand up at the end of the show and clap my fool hands off. But maybe instead of "Bravo" I'll borrow a line from one of the playwright's lesser-known works, Worstward Ho: "Try Again. Fail again. Fail better."

That's not mean spirited, it's love in action.

I could have forgiven jingle bells on Lucky even though he's a man not a reindeer. I could have gotten over Christmas lights on the tree and other questionable design choices. I might have even overlooked a tacked-on, post-blackout  tableaux at the end of the play — a deal-breaking heresy for purists who wouldn't be wrong identifying this last brief gasp before curtain call as a short wholly invented third act. Some will regard it as an affront, but I could have  let every bit of it go if only this Godot had more real life in its bones — If it leaned less on sentimental signifiers, and wrestled with the absurd comedy's fragile, flatulent humanity. I gave up hope near the end of act one when Vladimir (Didi) affirms his existence, turning to the nameless boy who visits the hobos on behalf of Mr. Godot who won't be showing up (again).

There are a million ways to play that scene, but all of them  are desperate, needy and crushing to observe. Otherwise the whole play's pretty pointless.  It wasn't at all, and was.

Godot is an austere clown show, generous in its foolery. It's the story of two bums waiting for an expected benefactor who never shows up. Over the course of two hours the baggy-pants duo ponders philosophy, discuss one another's body odor, consider suicide, dodge beatings, have adventures, observe inhumanities, and lean on one another when it's all too much. And they wait. Penned in the wake of WWII, at the dawn of a frightening atomic age, Godot is the 20th-century "bounded in a nutshell," as Shakespeare might say — a slapstick hymn to eternity in all its terrifying glory. TSC's production finds a lot of little laughs but misses the big ones. In the end (literally) this production has to expressly tell us there's howling terror and deep uncertainty about that final blackout because it's failed to show us along the way.

There are moments when Godot actor Paul Kiernan could pass for a Lou Costello clone on stage, and I mean that in the best possible way. Costello was a walking appetite — the kind of over-feeling, over-responding Harlequin-style clown that makes for a deeply satisfying Estragon (Gogo). Gogo is certainly the play's stomach, if not its heart and Kiernan connects with his appetites and audiences and his generosity elevates the performances of those around him. Moment to moment he's more emotionally invested than anybody else on stage and that pays dividends in laughter and clarity. The entire production winds up riding on his dusty coattails and when everything else breaks down he carries it like Jesus in the Footprints poem.

Michael Khanlarian also makes informed, interesting choices as Pozzo's bound man Lucky but everything about his performance seems to have been air-dropped in from another, stylistically different production. Lucky is a slave to authority, always ready to serve, dance, recite, or think on his master's command. He's mistreated and kept on the brink of exhaustion, unable to act of his own accord unless it's to kick or bite anybody who gets too close.

When he's not serving Pozzo, Khanlarian's heavy breathing becomes soundtrack, punctuating action. It calls to mind Beckett's 35-second play Breath, which features no actors on stage, only garbage and which also has a composed text made up of nothing but birth cries and breathing. It's the existence of short, wordless plays like Breath that makes this Godot's final, post blackout tableaux so problematic. Beckett approached his work like a composer. He put codas where he wanted them. Fin means fin. And Godot's first and second act endings aren't symmetrical by accident.

VLADIMIR:
Well? Shall we go?
ESTRAGON:
Yes, let's go.
They do not move.

I should apologize. I should never have begun this post with such a specific reference to contemporary politics. That was wrong of me, though it's true I may have had an ulterior motive. Even though the the quote is relevant  and title Waiting for Godot is nearly quoted in Moore's Vladimir-like commentary, this kind of reference to current events will certainly polarize readers and color all the rest — a bit like this Godot's vague and not so vague allusions to the Christmas holiday. Granted, the play is supposed to make audiences ask a lot of questions but, "Is Pozzo really Santa?"  isn't one of them.

I'm sorry. Let me walk that back a little.

Hats off to TSC's founding director Dan McCleary and all directors willing to take big, bold risks with precious material. To give McCleary's Godot its due, it might have achieved a more favorable result had the creative team taken a different route to the North pole and costumed Didi and Gogo in dirty Santa suits. That's more of a translation than an imposition or an explanation. Audiences would instantly and effortlessly recognize a modern trope of transience, instability etc.  I'm sure there are other ways to give the show a seasonal spin without raising additional, never-intended questions like "Where did they plug in the tree?"

I don't recommend any of that, mind you. But I appreciate the experimental urge. And also the urge to identify this production as a gift and welcome alternative for both Christmas lovers and those among us who've lost all interest in holiday spirits and "God bless us, every one."

This is an exciting time for Tennessee Shakespeare whose days of performing regularly at the Dixon may be numbered. With the purchase of Ballet Memphis' former east Memphis headquarters  the 10-year-old theater company has become the only professional, classically-oriented troupe in Tennessee with this kind of permanent facility at its disposal.  As everybody settles into the new space, I suspect a unique set of traditions will emerge.

Something meaty and special at the holidays would be welcome. Even better if it's difficult and risky.

For those who've never experienced Godot this clip of Patrick Stewart and Ian McKellen on Broadway is a good starting place.

On the odd chance my meaning's been missed, let me be clear: I did not love this show. Lighting was flat, scenic design was lacking, and the concept was intrusive. And, even though it  lasts for a few seconds only, I regard this Godot's last, tacked-on scene as one of the most questionable alterations of a text since Circuit Playhouse's creative team rewrote passages of Equus in 1998. But for some, even an off Godot may be preferable to the usual set of holiday retreads. Even as I type one of the most unfavorable reviews I've written in ages, I find myself wanting to see it again.

For reference, most of the row seated in front of me left at intermission, grumbling about their dissatisfaction on the way out. Others leapt to their feet end of show to applaud. So clearly, milage may vary. Widely.