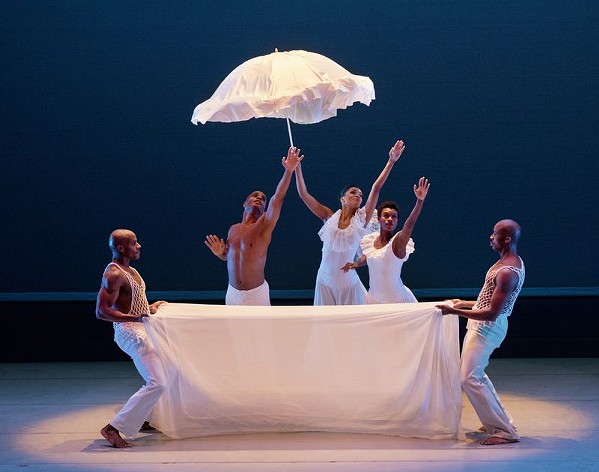 Tonight and tomorrow, the Orpheum will host the Alvin Ailey American Dance Theater, in an especially appropriate performance for this year's Black History Month. Ailey began the company in 1958, and was one of the first to feature jazz, “Negro spirituals,” and dancers from diverse cultures. Though Ailey himself passed away in 1989, that spirit of diversity lives on. And, in harmony with the MLK50 events taking place in Memphis, the Saturday matinee will feature a new work that evokes Dr. Martin Luther King, Jr. I chatted with company member and rehearsal director Matthew Rushing, to get a better sense of what the company will bring to this show.

Memphis Flyer: How would you describe the new work based on the work of Dr. Martin Luther King, Jr.?

Matthew Rushing: The ballet is called r-Evolution, Dream and it's based around Dr. King's speeches. One speech that really rings true to me is “The drum major instinct,” and what I feel was so creative and unique about this work is that Ms. Boykin wasn't able to get the original speeches, so she had to become more creative. One of the ways that she prepared the piece was to write her own material that was inspired by the speeches she had been studying in order to prepare this ballet. She also worked with Leslie Odom, Jr. to do the recording that you'll hear, as the voice that takes you through the whole piece, the narrator of the whole piece. That's Leslie Odom, Jr., who was formerly with Hamilton.

Popular quotes by other people that Dr. King used will be included in the piece, as well as Hope Boykins' original material. All of these things speak of and reflect Dr. King's spirit. One thing that Hope talks about is the class system —how there's this division of the haves and the have-nots. I love that she tackled the topic because, in the midst of all that's going on and all this talk about Dr. King and his messages, that's something that's not talked about as much.

And I think it's a privilege to be able to be a part of it. I got a chance to do some research on my own. I listened to Dr. King's speeches, and listened to the cadence and the spirit behind it, the dynamics. And I actually tried to carry the those things within the steps that Hope choreographed for me. It's a delightful opportunity. Each time I do the piece I hear something different, I feel something different, I connect with a different member of the company. It's a very strong, relevant, important piece

Well, he's a drummer, but he's also composer, and what he composed was this very wide range of music. One of my favorite moments is the opening solo that I have, and instead of using a speech from Dr. King, Hope gave Ali one of the speeches to listen to. And he would listen to the cadence in Dr. Kings voice and then he came up with a score based upon his cadence.

Looking over the program, it looks like the other selections for the evening shows are very relevant to Black History Month and the MLK50 commemoration, especially Members Don't Get Weary, set to the music of John Coltrane.

Once again, incredible elements that we are working with. Jamar Roberts, who is a longtime leading company member, did incredible research, based on getting in to the music of Coletrane. Jamar loves jazz and spent a long amount of time just meditating on Coltrane's music. He would write based upon what he received from the music. It was almost like a play — he wrote out scenes and the structure, the environment, what are the relationships between the dancers that are in each section. He wrote all of this out based on what he got out of the music, and that was almost like this storyboard to choreograph the piece.

In the first section he refers to the Negro spirituals, showing the ancestors, the people who went before us, the people who were involved in the civil rights movement and fought those fights for us so that we can be who we are now. But then the second section shows the current version of that same fight. It's a newer generation, but in a sense the fight is still not over and we still must endure those hardships and those fights. They may be packaged differently, but the struggle in the sense is the same.

So much of Coltrane's music is about reinvention, taking basic elements and morphing them, yet with the same spirit. I was surprised, given the themes of this performance, that the piece didn't include “Alabama,” which of course everyone considers Coltrane's most engaged piece with the civil rights movement. What are your thoughts on the two pieces that you do use for that performance, “Dear Lord” and “Olé”?

As I said, Jamar had a very clear story that he wanted to tell. So for a choreographer, it's important to have an ebb and flow. There has to be a very seamless flow, not only within the steps but also within the structure of the piece. So I think he just went to the song that spoke to him the most, and you'll see what I mean when you see the ballet.

I've never seen anyone capture Coltrane's musicality like Jamar. It's incredible. You can tell he studied the music deeply. Not only do you hear the music when you see the ballet, you see the music.

I guess you're no stranger to choreography based on classic jazz.

Yes, I choreographed a piece based on the Harlem Renaissance and within that ballet I had many different pieces by Fats Waller, Ellington, Count Basie, and others. I even had work from Langston Hughes — it was just a whole collection from that time. That piece was called Uptown. Doing that piece was my introduction to the brilliance of jazz. Before I had danced in a lot of Mr. Ailey's work set to jazz music, specifically Ellington music, and I appreciated it. But when I had to do the research for Uptown, that's when I started to fall in love with it. And it's amazing to see that tradition being carried in Hope's work and now in Jamar's work, since both are using jazz music.

I suppose that's one great pillar of the Ailey company because he was one of the first, if not the first, to really incorporate jazz into his choreography for modern dance.

I would say not the first, but I definitely feel that he is one who put it on the map. His works were so iconic that I feel it was the official introduction of the possibilities of modern dance and jazz. There are other choreographers, like Donald McKayle, who also choreographed to jazz. But Mr. Ailey, I feel, because his work has such an accessibility to it, just captured audiences around the world. And therefore he became that icon, that person that people look to as far as seeing what's new, what's next, and I think that's probably how we may see him — as one of the first.

How does Ailey's earlier work, Revelations, that you're performing, resonate with you in this century?

It's many things. First, it's genius. It's classic, and when I refer to something being classic, I also see it as being timeless. It still speaks to all different generations and it speaks to different cultures. And the interesting thing about it is that it has a very specific message. It talks about spirituality. It's choreographed to Negro spirituals, which talk about faith, the Christian faith, the Baptist faith. But for some reason there's a universality to it: audiences around the world who may not know anything about Christianity, the Baptist religion, or even Jesus. As with the piece, “Fix Me, Jesus,” which has all these references to terms that we have here in our faith, but I don't feel that people are excluded when they watch the ballet. It's a very open-ended ballet that speaks to what I always say: everybody has a spirit. We may have different moral beliefs or faiths, but I feel everybody has a heart.

So I feel Revelations speaks to your heart, it speaks to your spirit. We have all experienced hardships, we have all experienced the need for perseverance, and we've also all experienced some kind of victory, and how good that victory feels. And Revelations captures those topics. It shows you how how heavy oppression can be, it shows you the idea of going to the water to be purged and washed of your sins, and that's parallel to perseverance, trying to hang onto your faith and live. Even though we've been through the worst of the worst, we are still alive and celebrating what we have, and I think those are very universal topics.

So among all these different pieces you're performing, there's this Twyla Tharp piece, “The Golden Section,” from The Catherine Wheel, featuring music by David Byrne. Just on paper, it strikes me that the David Byrne score is quite a contrast with the jazz and spirituals in the show. How do you feel about that contrast?

Well it's exactly that. In programming, sometimes we will have programs that are theme-based and they're very specific from beginning to end, and sometimes the program is put together in a way that shows versatility within the different dance styles. Sometimes our programs are based upon just the music styles. Maybe the artistic directors feel a city has not seen works by a certain choreographer, or if the show has very heavy pieces, we need one piece just to brighten up the entire evening. There's just so many different things that go into the planning of the program. I don't think it's necessarily like “The Golden Section” was programmed to fit in the context of the other subject matter, but it's possibly there to broaden the audience's view of dance, and maybe even just to bring balance to the evening.

I've read the company last performed the piece in 2006, so this is a bit of a revival. Is that kind of cooperation between companies common?

Since we are a repertory company, we often run across those instances where a choreographer is connected to a specific company. We have a new work called Shelter and it was originally done by the Urban Bush Women. The Ailey company was the first company to do it, outside of the Urban Bush Women. So there are many instances where we dance works from specific choreographers associated with other companies. I think that's something that the directors aim to do, to take these excellent works and give the Ailey dancers a chance to be challenged. And also bring in these works that may not have been seen by the Ailey audiences and give them a chance to see different types of dance.