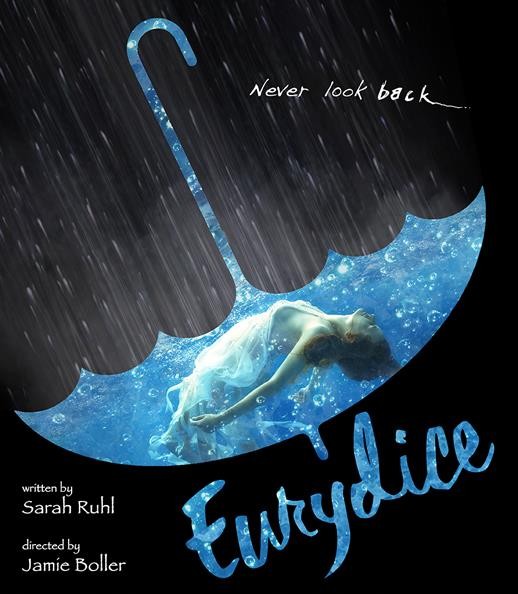 There are a couple of really fantastic plays opening this weekend. And it's killing me that I'll be off covering the Ameripolitan Awards and unable to see either Sarah Ruhl's nifty interpretation of Eurydice or Who's Afraid of Virginia Woolf at GCT in their opening weekend! Okay, I'm a honky tonk junkie and love all the musicians playing Ameripolitan events, so it's not TOTALLY killing me, but missing Eurydice — a reinvention of the Orpheus myth — is making me extra sad because it's Ruhl at her most painterly and poetic, effortlessly reshaping rules of narrative and what can and can't happen on stage.

Here's what Eurydice director Jamie Boller had to say about New Moon's production opening this weekend at TheatreWorks.

Intermission Impossible:
Why did you want to direct this play?

Jamie Boller:
Eurydice is one of my favorite stories—it has some of the most gorgeous language of any contemporary play that I’ve read. Ruhl’s play takes the classic Greek myth of Orpheus and tells it from the eyes of its heroine. It’s an incredibly powerful female story (and the first play for New Moon directed by and written by women, I might add!) I find the show to be incredibly relevant, both personally and politically. The play is a dark and magical adult fairytale—kind of an Alice in Wonderland meets Pan’s Labyrinth. Ruhl employs the surreal to examine the stark reality of what it means to lose someone you love. The story can be taken quite literally, but it can also be interpreted as an allegory for the grieving process. Ruhl wrote the play after she lost her father in her early twenties. She has said that writing this piece gave her an opportunity to talk with her father again. Audience members who have lost a parent or another loved one will be quite familiar with Eurydice’s journey. As our country is experiencing somewhat of a collective experience of grief over our current administration, this story is quite timely, as it asks the question: what happens to language and the ability to effectively communicate through grief?

Eurydice is Ruhl at her most poetic and painterly. And raw in the wake of her own father’s death. What kinds of challenges did this present for a small company, and how did you address them?

Ruhl’s script demands numerous seemingly impossible tasks such as: a raining elevator, three inanimate characters (the Stones), a ten-foot tall Lord of the Underworld, a river, a string room, and MORE. As New Moon is a smaller independent theatre company with limited financial resources, we tackled these design challenges with innovation, humor, and wit. Not to mention the strongest design team I have EVER worked with. The show has all original music, composed by Joe Johnson (currently starring in Once at Playhouse on the Square). David Galloway designed our otherworldly set, and Jake Lacher masterfully served as Technical Director. Mandy Heath designed the lights, which will take audiences to another world completely. The costumes, designed by Austin Conlee, are absolutely to die for. And last, but certainly not least, Brittany Church choreographed the abstract movement pieces in the show, which enhance and serve the surreal world in which the characters exist. This is one of the most technically ambitious productions New Moon (or TheaterWorks for that matter) has ever seen, and I think audiences will “oo” and “ah” at all of our surprises. A lot of the theatrical magic in this show is created right before the audiences’ eyes—we aren’t pretending this isn’t a play, and I think that makes things even more magical.

“Don’t look back” is one of the more obvious takeaways from the original Orpheus myth. But is it good advice?

Oh man, what a question, Chris! Through working on this process, it seems to me that the answer to this is complex and definitely lives in the grey area. For Eurydice and Orpheus, looking back is what, ultimately, leads to both of their downfalls. However, for Eurydice, looking back upon her childhood memories also helps her remember who she is, apart from her relationship with Orpheus. She becomes empowered through memory. For Eurydice and her father, nostalgia provides comfort and illumination. However, to dwell on the past is also to die a second death. For Ruhl, writing this play was a way for her to communicate with her deceased father. Through this process of memory and language, she was able to find some sort of peace. I think the grieving process involves a delicate balance of memory and moving on. This theme is certainly at the core of our piece.

"A Delicate Balance"
Well, that closing remark seemed like as good a segue as I could hope for into a conversation about A Delicate Balance author Edward Albee and his most famous play, Who's Afraid of Virginia Woolf, opening at Germantown Community Theatre this weekend.

With its themes of science and technology consuming history, Albee's profane and booze-soaked drama is the rare play that seems to become more urgent as it grows older. The cunning and hateful games of master and servant, which the aging academic George and his wife Martha play with their unsuspecting houseguests, may be viewed as a brief history of Western civilization. Their games reflect the cruelty of nature and of natural selection. The question keeps coming up: "Fight, fuck, or flight?" — whatever it takes, not only to survive but to dominate. It's terrifying, savagely, and often savagely funny. It's also a good fit for the intimate playhouse on Forest Hill-Irene.