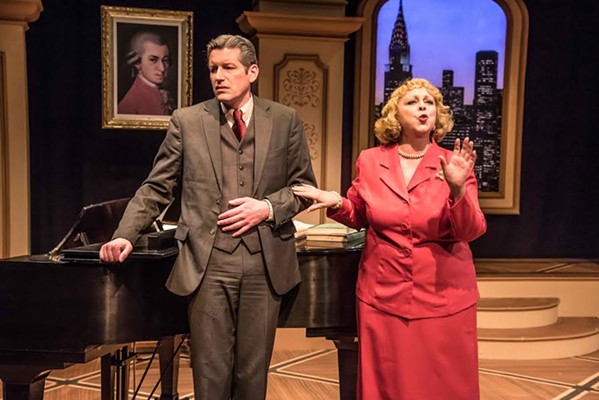 When Theatre Memphis first produced Souvenir in 2009 I had this to say about one of my favorite little pieces of biographical theater ever:

There is a place, you see, where awfulness and earnestness combine to create something truly special — something ridiculous yet as endearing and truthful as a child's painting. And as comical as these abominations may be, they have the power of authenticity and are somehow more intrinsically human than any display of virtuosity can ever be. This thing of which I speak is a rare but real quality, found not only in the works of McGonagall but also in the cinema of Ed Wood, and in the recordings of Florence Foster Jenkins, a tone-deaf opera singer who, having no sense of rhythm or phrasing, presented herself as one of the greatest sopranos of the early 20th-Century.

You can read all the rest here, though I regret that many of the videos have been removed since the original posting. Since this season's revival features the exact same cast as the original, I suspect I'll be just as happy with the result. Here's a video clip I made from 2009.

And here's the actual FFJ singing her heart out.