Is it okay to say that? Can I start a tribute that way? Because the f-bomb has been exploding in my mouth since Wednesday, when I received an early a.m. text message alerting me to the untimely, and unimaginable, death of Memphis actor and educator Greg Krosnes. Angry fucks, disbelieving fucks, resigned fucks — all kinds of fucks sputter out of my mouth, reminding me of when Greg and I were freshmen together at Rhodes College where our acting teacher Cookie Ewing made all of her beginning acting students say fuck on the first day of class. It was a profane, profoundly funny icebreaker with an underlying message: We’d be called on to say much harder things than that on stage someday — in life too. What I need to say right now is so much harder. Memphis has lost an amazing talent. I have lost a friend.

Nobody loved harder, hugged tighter, laughed deeper, or brought more life to his work than Greg Krosnes, who died in his sleep this week. He was 50.

We’ve never been besties, as they say, but Greg and I were brothers, onstage and off. We made our post-high school debut together in a Betty Ruffin-directed production of The Rivals at Rhodes College. But we weren't rivals, we were instant partners and collaborators who would eventually co-develop a senior project. Greg was always the handsome leading man to my brooding villain. He dug Abba and was the first person to volunteer in fight choreography workshops. I was the guy who’s a little too into the Dead Kennedys and way too eager to volunteer thoughts on Patrice Pavis’ Languages of the Stage.

I worshiped silent film comic Buster Keaton. Greg — one of the greatest physical actors and comedians I've ever known — could actually do the death defying stunts. He was famous for hanging lights without the aid of a ladder, swinging across the grid like a furless monkey, high above the floor of the McCoy Theatre’s black box. He’d effortlessly glide from bar to bar singing, or cracking jokes, or reciting lines from his favorite films, especially The Princess Bride. Golden-haired, with a mischievous,  nearly maniacal grin, it wasn’t difficult to look up and imagine the Dread Pirate Roberts himself, swashbuckling his way through the rafters in search of his Buttercup.

Greg wasn’t playing at being the good guy, he was the good guy, and he was good at it, too. He was good at everything — acting, singing, dancing. He could fight, direct, design, light— you name it. If it happened in a theater, he could do it and better than most. Greg had special affinities for physical comedy and musical theater, and Memphis audiences may remember him best as Tom Sawyer in the regional premiere of Big River or Mushnik in Little Shop of Horrors. He was one of Mamma Mia’s three potential dads, and the “normal” dad from the “normal” family in Theatre Memphis’ anything-but-normal production of The Addams Family. I’ll always remember him best as the disillusioned protagonist of Arthur Miller’s post WWII drama All My Sons, because I can never forget what it felt like playing George to his Chris and looking into his eyes as the character began to crack — to lock onto those aching blue peepers as they filled up with uncertainty and anger and so many unspoken fucks, and to know what it meant to feel safe and supported. To feel it down deep in my shoes. 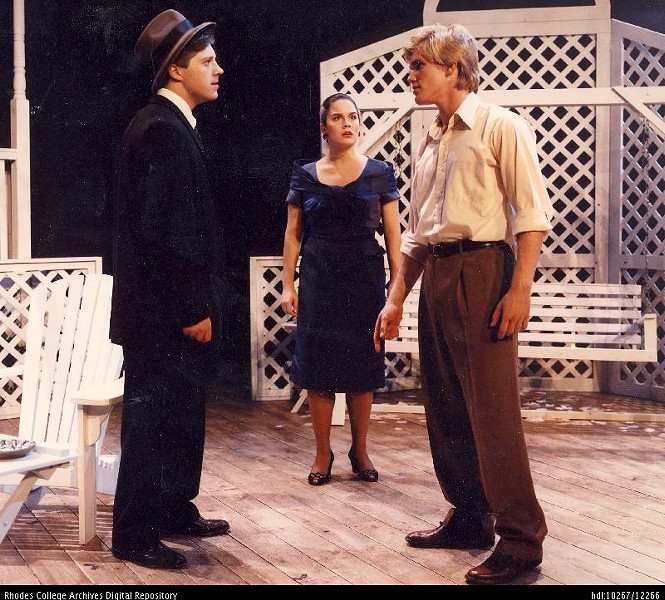 Greg’s greatest role was the one he played offstage. As an educator he infected the students he encountered with his love for stagecraft in all of its many manifestations. After earning a master’s degree from the University of California at Irvine, he returned to Memphis to teach — first at Rhodes, later at Arlington High School.

Greg was a longtime judge for Memphis’ Ostrander Awards and we would meet occasionally and sit together on the back row of some local theater or other. This was usually a random occurrence, almost never planned but always welcome. Because it was like school had never ended, and we’d never been apart. A conversation that started in Tuthill Hall in the fall of 1985 always picked up right where it had left off. A good conversation, spirited and full of learning and laughter. A conversation that ended sweetly, but never concluded.

The last time Greg and I spoke I reminded him of the time he and Ann Sharp saved my skin on stage when I understudied Herr Zangler in On the Razzle and wound up going on after only one rehearsal. Things were going brilliantly till, in one scene, I completely lost my way. Panic took over as I repeated the last line I could remember like a broken record. Greg and Ann took charge and walked me through all the rest without missing a beat or a laugh. But the man who could recite the lines to every movie he’d ever seen front to back swore he couldn’t remember any time I’d been anything shy of perfect — and of course he couldn’t remember the bad times. Greg was loved so much because he loved so much.

I know I’ve spilled a bunch of words here, but only the first one came easy. If it offended anybody, I’m sorry, but it’s all I had for the longest time. It may be all I have left when I'm finally done here. It's not like we ever met up for beers anymore. Or margaritas. Or coffee, even. But I haven't fully come to grips with the idea that I'll never see him sitting on the back row of TheatreWorks underneath the lighting booth. I won't be able to rib him about stealing "my seat." There will be no more manly hugs that go on and on without ever wearing out their welcome. We'll never do that "one last show" we so often talked about.

It's a cliche and as a critic I shouldn't indulge or encourage. But never hesitate to tell friends you love them. Even if you've just said it, go on ahead and say it again. It beats the fuck out of the alternative.

Greg's family will receive friends on Sunday, July 8th from 2-4 p.m. with the Memorial Service to follow immediately at 4 p.m.

All services will be held at Memorial Park Funeral Home and Cemetery, 5668 Poplar Ave.