Can You Spell Fun? Theatre Memphis Hosts a Lively Bee

The midterm elections are over — hooray! But nobody's catching a break from our national shit-show. The race for 2020 is on like Fox News in a waiting room! Jeff Sessions is out as Attorney General! The Constitutional Crisis Clock is now set at one minute 'til midnight. Everything only gets worse. Wouldn't you like to get away? Maybe spend some time in a place a little more like Norman Rockwell's America? Only funny?


I've seen The 25th Annual Putnam County Spelling Bee too many times. The jokes shouldn't work. But they do. The Tony-winning one-act combines all the elements of a traditional musical with all the unexpected surprises of improvisation and audience participation. It's the rare show that can be exactly the same from night to night while providing a completely different user experience from audience to audience

The musical's characters represent a broad spectrum of adolescent privilege and insecurity. Chip's been told he's not so smart. Olive made friends with a dictionary because her parents were never there for her. Even perfect Miss Marcy Park who plays piano, twirls baton, speaks six whole languages, and spells like a champion is struggling with the personal cost of overachievement. Angst, acne, and unfortunate erections are on parade. It's only a fraction of the freaky, geeky goodness packed into one of the most purely entertaining musical comedies of the past two decades. 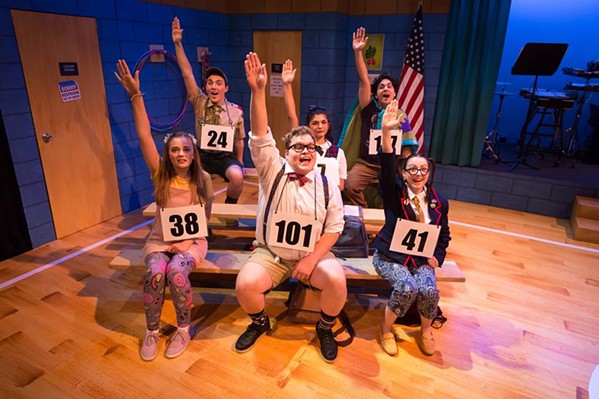 Bee's an actor-driven show. It's the kind of thing a solid company of players could do well with almost no physical resources. But that's not how Theatre Memphis rolls. It's certainly not how director Cecelia Wingate (usually) rolls. This one's a monster of detail with Jack Yates' immersive set dropping audiences on the sidelines in a school gym so convincing you can practically smell the tube socks. Lighting designer Mandy Heath skillfully, and unobtrusively illuminates a good, old, cutthroat American spelling bee. If you ever went to school, you know all these kids. And you know right away, there will be blood. And hugs. And juice boxes.

Something about this modest ensemble show always brings out the best in character actors. Theatre Memphis' production is no exception. Jenny Madden, Jimbo Lattimore, Jared Johnson,  Ryan Gilliam, Javier Peña, Nichol Pritchard, and Miranda Tonkin all give fun, first-rate performances. But there's a little something extra that happens between Kevar Maffitt's unapologetically weird William Barfee and Jenny Wilson's nearly spectral take on poor Olive Ostrovsky, who seems to have fled some awful story narrated by Lemony Snicket. He's over-the-top. She's just barely there. Together they're perfect.

Did I mention at any point that everything is awful? Because that's not correct. The 25th Annual Putnam County Spelling Bee is anything but awful. If anything, it's an antidote for awful. While you're watching it, anyway.