Things are seldom about the things they seem to be about. Take Tru, for example. This solo performance by the mighty and all-powerful Mark Chambers, would appear to be a dramatic portrait of In Cold Blood and Breakfast at Tiffany’s author, Truman Capote, but it’s not really. While Capote is clearly the subject, this brief, intimate and fantly gonzo encounter, brought to us courtesy of Cloud9 Theatre, is a fully developed play about the slippery multifaceted nature of addiction.

Tru introduces us to a man keenly aware of expiration dates. He's planning a comeback built on weight loss, plastic surgery, and fine hats to hide an expansive forehead where shaggy locks had hung. This is Capote at his lowest; he was more famous for being famous than for the extraordinary sentences he used to spin out of dust and memory and diamonds and horror. Now he’s just a drunk and an A-list gossip who’s been delisted for telling tales and naming (a few) names.

Tru’s still giving Tiffany for Christmas, but he’s getting flowers in aluminum buckets. Hard candy for a naughty boy who’s grown accustomed to spending his nights at Studio 54 and his days with folks able to produce $50-million, “ready money.” He knows there’s meaning here, but chooses to drink it away, chasing booze with pot and pills.

The real addiction, though, is celebrity. It’s no good for Capote the writer and artist , but he craves it. He wants it for himself and he wants to be near it. In Tru, celebrity is the lens through which Capote’s addictions are most clearly viewed. If the play’s primary struggle isn’t about this, transcending the tropes of Capote’s own fame, what’s left is mere tribute artistry. 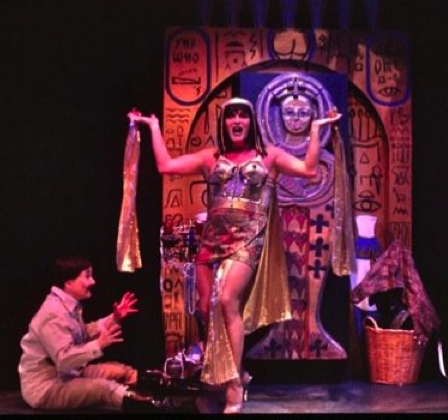 Thankfully, Mark Chambers is every inch the actor I remember from our overlapping time in Memphis. He is no mere mimic. He’s revived this show four times now, and it's evident in this revival at The Evergreen Theatre, that he is very comfortable in Capote’s uncomfortable skin. Tru could still stand fine tuning to tease out narrative threads, connect the dots of conflict and addiction, and make it drama-forward, but all the raw material is all there, and hardly insufficient.

Chambers, who longtime Memphis theater fans may remember as the sweet transvestite in two separate Playhouse on the Square productions of The Rocky Horror Show, is a professional member of Actor’s Equity. But it’s probably more important to point out that Cloud9 is community theater. I don’t say that to trigger memories of Waiting for Guffman, but as a reminder that this, and other companies exist to correct for institutional deficiencies. Cloud9, for example, helps to account for the limited number of great roles available to older actors in Memphis. That’s exactly how community theater should work and Chambers has often described Tru as “a good show for this time in [his] life.” I don’t disagree and won’t complain a bit about how Cloud9 does its thing, but as I watched Chambers do his thing, I kept thinking there would be a lot more great roles available to older actors if more people thought Dr. Frank-N-Furter would still be a good part for him, “at this time in life.”