Playhouse On The Square Invites You To The Cabaret 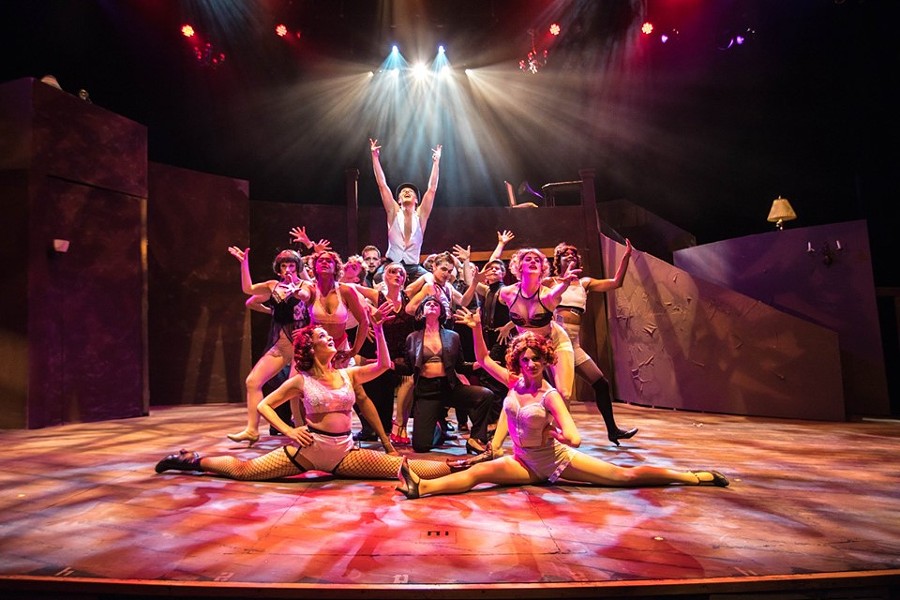 "No use permitting some prophet of doom
To wipe every smile away
Life is a cabaret, old chum
So come to the cabaret"
— "Cabaret"


I posted some thoughts about Cabaret's nearly infuriating relevance last week. It was a kind of preview for Playhouse on the Square's opening. Only, instead of looking behind the scenes, it went behind the text to ask where all the Nazis came from. And, by extension, I wanted to know where America's Nazis went when the U.S. entered WWII and the national narrative turned against them.

As musical theater rollouts go, it was a pretty bleak exercise. But even a week ago, I don't think I could have anticipated the kinds of headlines I'd wake up to on the morning I sat down to write the review. Twitter was full of news about racism, misogyny, drunkenness, sexual exhibitionism and drug use inside Tennessee's GOP leadership — rot in the head of an organization so grotesque it wouldn't hear, let alone approve, a 2018 proposal to condemn Nazis and white supremacy. But the headline that really got my attention was this: "Man Patrolling With Border Militia Suggested Going ‘Back To Hitler Days."
“Why are we just apprehending them and not lining them up and shooting them?”  Armando Gonzalez was quoted as saying. “We have to go back to Hitler days and put them all in a gas chamber.”

That's a lot to deal with at the top of a review, but hard to ignore given Cabaret's subject matter and Playhouse on the Square's sometimes very brave and sometimes ragged interpretation of material that stubbornly refuses to become nostalgia.

As taught in schools, history is the story of great men, noble ideas, and the march of progress. But history is a horror show that we live inside and can't escape. It's a theme we see even in mainstream entertainments these days, and in that vein, Cabaret director Dave Landis effectively takes us "back to the Hitler days."  His Cabaret bends the all the weirdness and decadence of Berlin's club scene toward hallucinogenic nightmare.

Inspired by I Am A Camera, I've previously written how Cabaret, shows three snapshots of Germany during Hitler's rise to power: a sentimental Berlin, a decadent Berlin, and the Berlin where Nazis multiply and metastasize. The first pictures win out hearts and other parts before the last one comes into focus.

We experience these pictures through the eyes of Cliff (Donald Sutton), a writer visiting Weimar Germany, looking for inspiration. The young American gets more than he bargained for when he comes into the orbit of British expatriate and club singer Sally Bowles. With lighting that lands on the audience like a cutting remark and action that breaks the fourth walls at will, this interpretation of the book borrows ideas from expressionist theater, vintage German agitprop and probably Babylon Berlin, but with a considerably smaller budget.

As Bowles, Whitney Branan is more Lotte Lenya than Liza Minnelli. She lets her voice go ugly, and I mean it in the best way possible. She slings sound like a hammer or a razor. It's the perfect tool for a character who flourishes in the midst of disaster because she's more Mother Courage than meets the eye.

Though sometimes incomprehensible as he spits out too many words too fast in a thick German accent, Nathan McHenry's intentions are never unclear. As the emcee he welcomes the audience like a good horror host, and ushers them back and forth across Cabaret's intersecting storylines, on journey all the way to hell. It's an impressive, athletic performance, but it's Playhouse stalwart Kim Sanders who emerges from the chorus to deliver Cabaret's crushing blow. She leads the cast through "Tomorrow Belongs to Me," an infections, inspirational number that begins so sweetly, and ends with the earth shifting hard on its axis. From nowhere so many Nazis emerge. Only they don't really come from nowhere; they were there all along.


The film version of Cabaret achieves a special kind of clarity. Berlin's Nazis aren't hidden at the beginning, they're just pushed to the margins and not taken seriously. Then suddenly they're everywhere. They're everybody. It's a strong blueprint for negotiating any narrative vagaries in the stage musical's book.

What it lacks in this level of subtlety, Playhouse on the Square's production counters with the somnambulant urgency recently described by the Twitter parody/tribute account Werner Twertzog: "Dear America: You are waking up, as Germany once did, to the awareness that 1/3 of your people would kill another 1/3, while 1/3 watches."

I sat in a box seat far house left, and so many of this Cabaret's more intimate moments took place far stage right. That means there's a lot about this show I really can't discuss with any authority, because my view was so badly obscured. This won't be a problem for most audience members, but for me it was enough of an issue to cut the review short. What I saw was thoughtful and provocative. What I couldn't see at least sounded like a close match.

It's so easy to fall for Sally Bowles – to buy into her spiel about the short distance from cradle to tomb, and carpe diem, and all that. "Come to the Cabaret," she belts like a carnival barker, pitching all the attractions. Only Elsie, the former Chelsea flatmate Bowles valorizes in the musical's title song, didn't win a prize by dying blissfully ignorant. Nobody won anything by ignoring their prophets of doom, certainly not the people Elsie's happy corpse left behind in the soup.

I don't always know why we go to the theater anymore. I don't think it's to serve any of the old civic functions, but maybe it is sometimes. It's certainly not for any kind of meaningful moral instruction or else all those money-printing productions of A Christmas Carol would have fixed us up pretty good by now.

Escapism's high quality these days, relatively cheap,  and almost always at our fingertips. But if Hamlet's right and plays really are conscience catchers, many playgoers will see themselves inside the Kit Kat Club when the show's grimy, accusatory lights come up over audience. That's the kind of Cabaret this is. But if it doesn't move them to do more than renew their season subscriptions, we'd might as well start celebrating. Right this way, your table's waiting.

Cabaret Playhouse on the Square Review