Dramatis Personae: Observations from the Ostranders

August 27, 2019
3 comments
The 2019 Ostrander Awards ceremony held Sunday at the Orpheum was, as one has come to expect, packed with soigné theatre lovers in character and out, in their heads and out, cheering or consoling as needed.

The event alternated musical numbers and clusters of awards, keeping things going at a good clip. Among the highlights were Debbie Litch, executive producer at Theatre Memphis, giving the Behind the Scenes Award posthumously to Mike Lupfer. Lupfer died last year at age 81 and is remembered as a worldly man with diverse interests.

As described by Chris Davis recently in Memphis magazine, he was "a teacher, a world traveler, a family man, a theater lover, a friend to many, a past chair of the psychology department at the University of Memphis, a sometimes scoutmaster, and a paragon of local leadership and volunteerism."

The estimable Chris Ellis transported himself from Hollywood to introduce Christina Wellford Scott, the recipient of this year's Eugart Yerian Lifetime Achievement Award. Scott and Ellis are longtime friends from back in the Pleistocene era of Memphis theater. Ellis departed the local theater scene and ended up in Hollywood where he books films and television shows with some frequency. Among his credits: Armageddon, Apollo 13, My Cousin Vinny, The Dark Knight Rises, Godzilla, Catch Me If You Can ... you get the idea. He is also an illustrator who does work for Memphis magazine as well as posting death anniversary drawings on his Facebook site, occasionally serious, frequently funny, and typically offensive.

Ellis' intro of Scott was, by the way, occasionally serious, frequently funny, and typically offensive. He insisted on pronouncing the award winner's first name as "ChrisTYNE-a," causing occasional moments of apoplexy in the audience, members of which would holler "ChrisTEEN-a" to no avail.

The director Dennis Whitehead Darling got the gold of the evening, winning Best Direction of a Drama in the community and professional division for The Parchman Hour: Songs and Stories of the ‘61 Freedom Riders at Hattiloo Theatre, and Best Direction in the collegiate division for Intimate Apparel at the University of Memphis. Parchman also won Best Production of a Drama and Intimate Apparel won Best Overall Production. Yes, but what has he done lately you ask? Go to Hattiloo this weekend and see Jelly's Last Jam through September 1st. 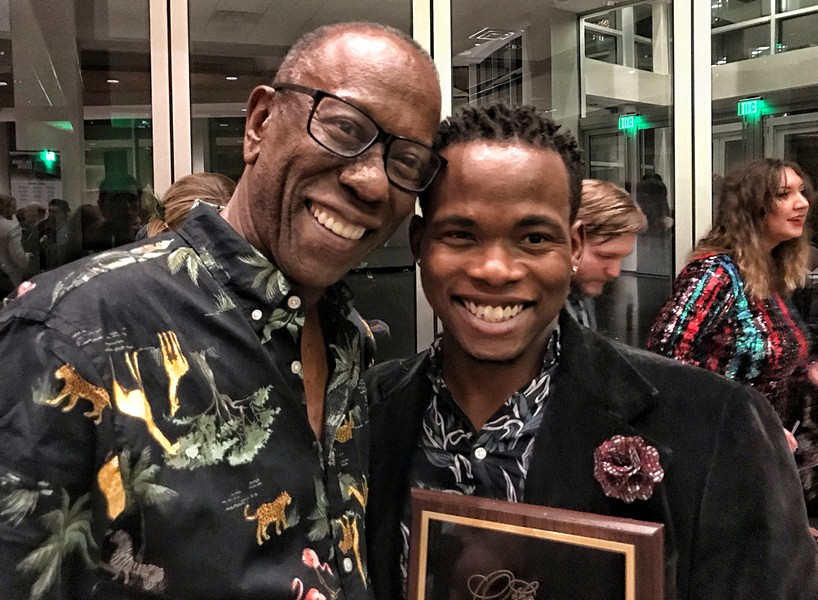 It was also a splendid evening for Jason Spitzer who picked up two awards for Little Women: Best Original Script and Best Production of an Original Script. Spitzer is somewhat of a fearless genius who adapts and directs stories that he loves. A few years ago he revamped a turgid version of A Christmas Carol at TM and, well, God bless us every one for that improvement.

Jason Gerhard was on both sides of the awards ceremonies, first getting his own plaque as Best Featured Performer in a Drama for his work in Junk at Circuit Playhouse, and then introducing the winner of the Larry Riley Rising Star Award, Karl Robinson.

First time winners are predictably excited, but few were as over the moon as Ariona Campbell, who won Best Supporting Actress in a Drama in the collegiate division for Crumbs from the Table of Joy at Southwest Tennessee Community College. She attended the ceremonies with daughter London. 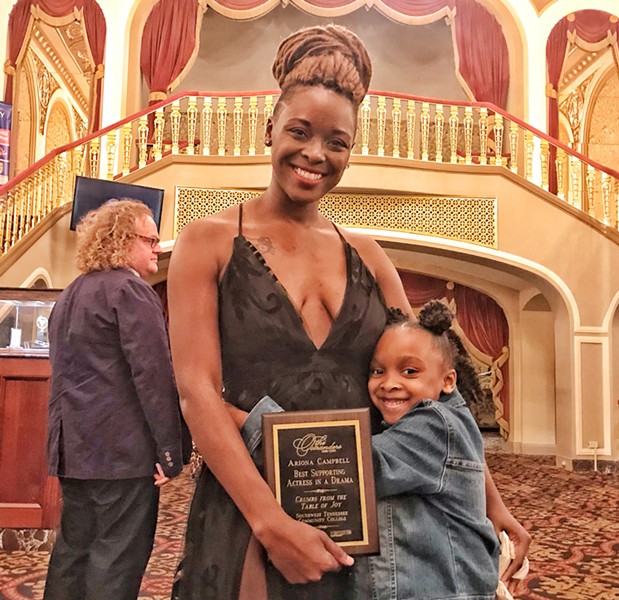 After the ceremonies, attendees adjourned to the Halloran Center next door to further schmooze, emote, pose, crack wise, and try to impress potential directors. After all, these are theater people, people.