The U of M baseball team opens its season Friday against Southern Illinois at FedExPark (5 p.m.). The Tigers aim to build upon last season’s 30-27 record, but in a league with Top-25 competition like Rice, UCF, and Southern Miss. (Conference USA is a stronger baseball league than basketball.) Coach Daron Schoenrock enters his eighth season with hopes of leading his team back to the NCAA tournament for the first time since 2007. I sat down with “Coach Rock” earlier this month to get a sense of where the program’s heading.

On the 2012 pitching staff:
“We have two experienced weekend starters returning: Dan Langfield and Clayton Gant [both juniors]. Dan is projected to be a high pick in the draft this year, so we’ll probably lose him [after the season]. Lots of scouts coming through to see him. Clayton had Tommy John surgery at Tennessee, left, and came here. He’s fully recovered. It’s taken almost two years to get his velocity back. Chase Joiner [a senior] has also recovered from Tommy John. He’ll be a big factor for us, whether it’s in the bullpen or a midweek starter. Sam Moll is a lefty who could be a midweek starter.”

On the mental component to a pitcher recovering from Tommy John surgery:
“You go through the whole strengthening program, where you’re not throwing at all. Then you go through a phase where you progress to long-toss. Then you go to the mound. The last stage is actually attacking hitters in the box. The elevation of the competitive moment has you extend more . . . and that’s the biggest hurdle mentally. When you’re not thinking about your arm but thinking about making a certain pitch at this moment.” 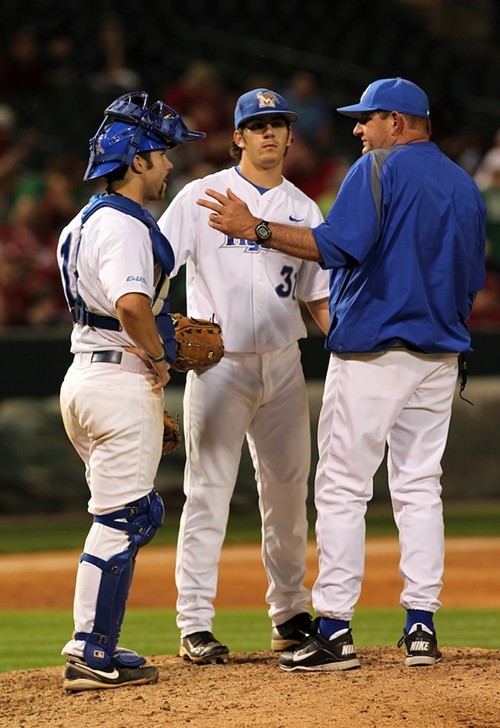 How do you find left-handed pitchers? It’s hard enough for big-league scouts.
“In the last three or four years, there have been more, because of youth baseball and how many teams are traveling. You’re able to find more lefties. They’re playing year-round, so there’s more time to evaluate. We signed seven recruits last fall and three of them are left-handed pitchers. College baseball is a battle of pitching depth.”

Beyond pitching, what are the strengths of this years’ team?
“To overcome any lack of depth [in pitching], you have to be really solid defensively. You may have to run out a pitcher who’s just a strike thrower, who will put a lot of balls in play. Defensively, we have to be able to handle that kind of pitcher. Our senior captain, Jacob Wilson, is our returning third-baseman. He’s played here every day since his freshman season, and he made only three errors last season. [Sophomore] Ethan Gross will play shortstop. We’re really efficient on the left side of the infield.

“And we have all of our firepower returning offensively. Our RBI guys. We lost Chad Zurcher and Drew Martinez to the draft, so we’ll have to find [top-of-the-order] hitters.

On his longevity as Tiger baseball coach:
“We haven’t broken through and done amazing things in one big-splash year. It’s been steady. We’ve reached the point where we have some stability with our roster. When I took the job, I brought a different recruiting plan. For example, you never want to lose your entire weekend rotation in one year. When I took the job, all three starters from the year before signed pro contracts. Now we’re losing one or two. So you have some continuity. And you never want to lose your whole infield.”

On adjusting when players capture the attention of pro scouts:
“The key is communication with the individual player. I’ve never been a guy that stresses holding juniors back. If they’ve gone through three years and they’re attractive to pro scouts, that’s the only time they’re going to get paid [a signing bonus]. A junior for us who gets drafted may get a $70,000 signing bonus, then he’ll never be able to negotiate his salary again until he reaches the big leagues. Now, if he comes back as a senior and ends up getting drafted in the 20th round, he’ll get $1,000.

“I try and get them as ready — physically and mentally — as I can. It comes down to a player having to trust his ability [if he stays]. You become an advisor, a parent in some ways. We’ll have some seniors get attention, not so much as major-league prospects, but to fill out minor-league rosters. Then it’s a matter of how well you play in the minor leagues. And they leave here with a degree.”

On the evolution of the Tiger program:
“I had no idea [FedExPark] would happen as soon as it did. A lot of people advised me against taking the job because Memphis had never really done anything to elevate the facilities. I felt like if we improved the product on the field and did the right things off the field, something good would happen. We went to the NCAA regionals in 2007. Then it was a two-year project to get this facility done. We had to play in Millington one season, and that was tough. Now that we’ve been here, the stability of the program is at an all-time high.”

On the possibilities of Memphis reaching the College World Series in Omaha:
“There’s a school like Memphis that reaches Omaha every year, just like Butler in basketball. You get into the field of 64 and then get hot for two weeks. Fresno State won a national championship a few years ago and at one point they were 14-17.”

On adding Tennessee to the schedule for the first time since 1995 (the Tigers play in Knoxville on April 4th then host the Vols on May 9th):
“It’s huge for the Memphis Tiger fan base. I worked really hard to get this done. I had tried on our end continuously. The logistics of baseball travel make it a challenge. We bus. We’re playing them on our way to Marshall, then they’re playing us on their way to Ole Miss. That only happens every other year. I’ve known [UT coach] Dave Serrano a long time. I don’t want to go on the road a lot if we don’t get something in return. Being able to do a home-and-home thing, it makes sense. I like to keep games like this on the schedule for the challenge, the quality of competition.”

On big-league managers he admires:
“I guess I’m more like Bobby Cox. Every day is the same routine. Make the players feel like they understand, and they’re comfortable with what’s going on. Not too many highs, not too many lows. If I have to figure out a way to get you excited 56 times, I may not have the right player. It’s more about establishing continuity through routine.

“And since moving to Memphis — it’s such a Cardinal-based town — I’ve come to admire Tony LaRussa, too. I don’t get in players’ faces a lot. I challenge them in other ways. I like to keep the dream of the big-league experience alive in the locker room. That creates a different kind of work ethic, outside what we’ve prescribed.”

On handling players who don’t realize the dream of pro baseball:
“You want to never look back and think, if I would have done this or that . . . . I coach them like they’re all going to play in the big leagues. In that process, we’re going to impact them in other ways: you are going to class, you are going to make your study-hall hours. We’ve had the highest team GPA in Conference USA two years in a row now. We’re here to reach the pinnacle of this game. Let us, as coaches, handle all the ‘Plan B’ things. They’ll take care of themselves by how we operate on a daily basis.”