The first three minutes of tonight’s Conference USA quarterfinal were worrisome for those wearing blue at FedExForum. Not quite three weeks after the Tigers’ most dispiriting loss of the season, Memphis fell behind the very team that delivered that defeat — the UTEP Miners — 10-2. A team that won precisely one road game all winter (at Beale and Third) made its first four shots (including a pair of treys) to capture the attention of C-USA’s regular-season champion.

But the next 37 minutes of play went just fine. Led by the sophomore trio of Tarik Black, Joe Jackson, and Chris Crawford — all native Memphians playing their first postseason game in their hometown — the Tigers charged back from the early deficit to take a 31-26 halftime lead. A 9-2 run to open the second half gave the Tigers a 12-point lead and the Miners wouldn’t draw closer than seven points the rest of the way. 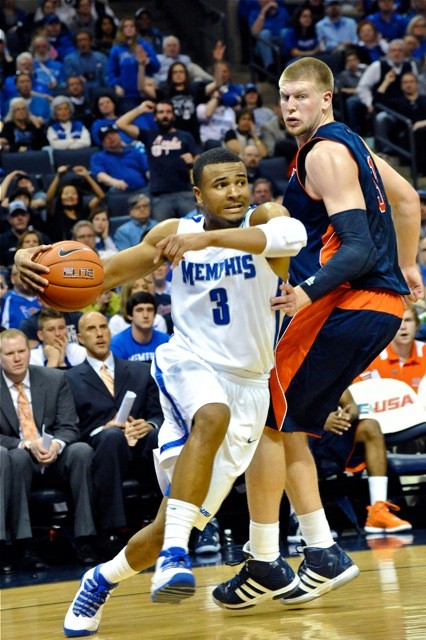 Black earned his second double-double in as many games against UTEP with 15 points and 13 rebounds. Jackson scored a game-high 17 points — two of them on a breakaway reverse dunk in the first half — and picked up five steals. Crawford added 11 points and dished out seven assists.

Coach Josh Pastner liked what he saw from Jackson, the hero of last year’s win over UTEP (in El Paso) that gave Memphis a C-USA tournament title and an NCAA tournament berth. “He was hard-nosed,” said Pastner. “I love to see the fire. He can alter the game just with his fire. I want the emotion. He continues to get better.”

The Tigers locked down defensively in the second half, holding the Miners to 26-percent shooting (34 percent for the game), appreciably lower than the 44 percent allowed in the UTEP victory last month. The Tigers had 15 steals and seven blocked shots (three of them by Black). UTEP only hit two of 12 three-point attempts.

“This time of year is desperation for everybody,” said Pastner. “We got down a little bit, but we were able to relax, settle down, and win the game with defense.”

A day after being named C-USA’s Player of the Year, Memphis guard Will Barton had one of his poorest games of the season with seven points, three rebounds, and four fouls (including a technical after some jawing during a stare-down with UTEP players midway through the second half). “He was so ready,” said Pastner, who acknowledged the Player of the Year news might have been a distraction. “He had a great shootaround. He may have been too ready. He wasn’t relaxed enough. But in the NCAA tournament, that’s how games are going to be. You’ve got to grind it out and win ugly games.”

Now 24-8, the Tigers will play the winner of tonight’s UCF-UAB game in a semifinal Friday at 5:30.