In terms of wake-up calls, the Tigers’ two-point loss to UTEP on February 18th at FedExForum is working its way into the history books. Since that deflating upset, Memphis has won all six games it has played, and by margins that read like a lottery number: 23, 20, 29, 12, 18, 31. Coach Josh Pastner likes to emphasize after each blowout win that his team is merely “getting better.” With a second-straight Conference USA tournament championship now within reach, the Tigers are indeed accelerating their level of play at just the right time.

“We just ran through our plays crisply today,” said sophomore center Tarik Black after the game. “Yesterday [against UTEP] we were kind of anxious, because it was the first game. Today, we calmed down and played Memphis basketball.” 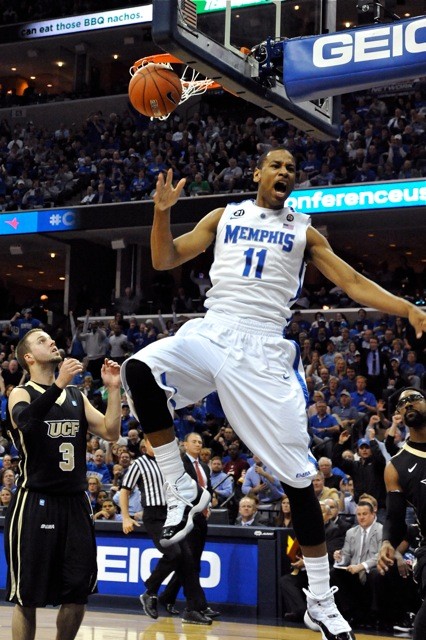 Despite the lowest two-game output of the season by C-USA Player of the Year Will Barton (17 points), the Tigers won their quarterfinal and today’s semifinal by a combined 49 points, each victory coming over a team that beat them during the regular season. The U of M defense was again oppressive, holding UCF to 33-percent shooting for the game. All-conference forward Keith Clanton was limited to five points and one rebound. He was one of five Knights to pick up at least four personal fouls.

On the offensive end, the Tigers had six players score between eight and 15 points, led by senior Wesley Witherspoon. While Will Barton was held to 10 points, he led the Tigers in rebounds (7) and assists (6). Black scored 13 and Joe Jackson added 10. Memphis hit 27 of 36 free throws, led by Witherspoon with eight of 10.

The Tigers had a 10-point lead just nine minutes into the game and UCF was unable to close the margin to single-digits. Junior reserve D.J. Stephens twisted his ankle and was limited to a single minute on the floor, but Pastner said the injury wasn’t serious and Stephens should be ready for Saturday morning’s championship game against Marshall. Freshman Adonis Thomas played his second game in as many days after missing 15 with an ankle injury and scored five points in 12 minutes of action.

Pastner pointed to his team's defense as again being the engine of a 31-point rout. "They're getting better with the concepts, fundamentally where they need to be on the court. Things sometimes you can't see with the naked eye. Defense is about energy and determination. And being at the spots you need to be."

Memphis (25-8) will now seek a sixth C-USA tournament crown, and a fifth at FedExForum. To raise the trophy, they’ll need to beat a Marshall team that’s already been victimized during the Tigers’ late-season winning streak. The U of M may have secured a berth in the NCAA tournament, but for the Thundering Herd (21-12), Saturday’s game will likely be their only chance to gain entry to the Big Dance.

Said Black in the postgame press conference, “We sat down in the locker room after the game and said ‘One more.’ That’s our mindset. Be prepared, be focused, be locked in.” In his coach’s words, get better.

Tip-off Saturday will be at 10:35 a.m. The game will be televised live nationally on CBS.