Sophomore guard Will Barton announced what most Tiger fans expected Thursday, that he'll forgo his final two seasons of college eligibility and enter the 2012 NBA draft. Barton led Conference USA in scoring this season (his 631 points are the 10th-most for a single season in Memphis history) and became the fourth Tiger to earn C-USA Player of the Year honors.

Here's a look at the seven most recent Tigers to leave early and test the draft waters:

DAJUAN WAGNER
* Set single-season scoring mark at Memphis (762 points) as a freshman in 2001-02. Led Tigers to NIT championship.
* Selected by Cleveland with 6th pick in 2002 draft.
* Played in 103 NBA games over four seasons (with a single-game appearance for Golden State during the 2006-07 season). Averaged 21.4 minutes and 9.4 points per game. 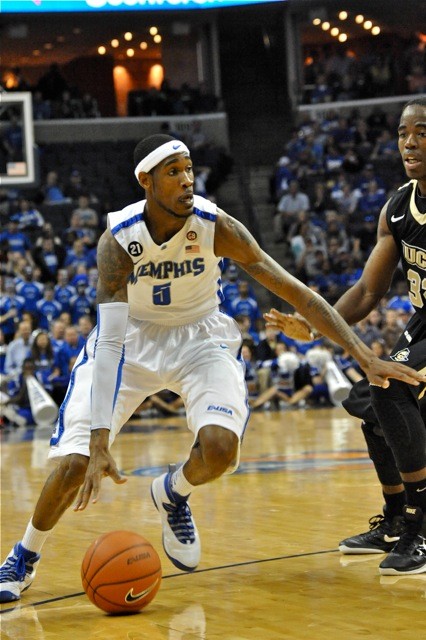 SHAWNE WILLIAMS
* Third-team All-CUSA as a freshman in 2005-06. Also named MVP of 2006 C-USA tournament. Started for team that reached NCAA tournament Elite Eight.
* Selected by Indiana with 17th pick in 2006 draft.
* Has played in 215 NBA games (for four teams) over five seasons, including 25 games with New Jersey this season. Has averaged 16.4 minutes and 5.7 points per game.

CHRIS DOUGLAS-ROBERTS
* First-team All-America as a junior in 2007-08. Led Tigers in scoring as sophomore (15.4 points per game) and junior (18.1). 2008 Conference USA Player of the Year. Played for team that reached 2008 NCAA championship game. Ninth in Tiger history with 1,545 points.
* Selected by New Jersey in second round (40th pick) of 2008 draft.
* Has played in 155 NBA games over three seasons (with the Nets and Milwaukee), averaging 20.6 minutes and 7.7 points per game. Has played this season overseas.

DERRICK ROSE
* Third-team All-America for Memphis as freshman in 2007-08. Led Tigers to NCAA championship game, where they lost in overtime to Kansas.
* College records (including those of his team) have been erased by NCAA for violations involving Rose's qualifying SAT test.
* Selected by Chicago with first pick in 2008 draft.
* 2008-09 NBA Rookie of the Year. 2010-11 NBA MVP. Has played in 274 games, averaging 36.9 minutes and 21.1 points.

ELLIOT WILLIAMS
* Played freshman season at Duke, then one season (2009-10) for Memphis. Led Tigers in scoring (17.9 points per game) and named first-team All-CUSA.
* Selected by Portland with 22nd pick in 2010 draft.
* Sat out rookie season with injury. Has played in 24 games this season, averaging 6.2 minutes and 3.7 points.