Tulsa coach Danny Manning enjoyed his share of dominant games during his All-America playing days at Kansas. So the first-year head coach surely appreciated what Tiger senior D.J. Stephens did Saturday afternoon: four dunks, a three-pointer, four blocks, nine rebounds, and a career-high 15 points. That was in the first half.

The Tigers' surpassing "energy guy" was hardly needed in the second half, as the U of M extended a 17-point lead and finished off its most complete game of the year, the team's 12th straight victory. Stephens finished with 15 points, 13 rebounds, and five blocks in merely 16 minutes of game action. The two dunks and two jumpers he delivered in the game's first five minutes — staking the Tigers to an 11-3 lead — were really all the home team needed. 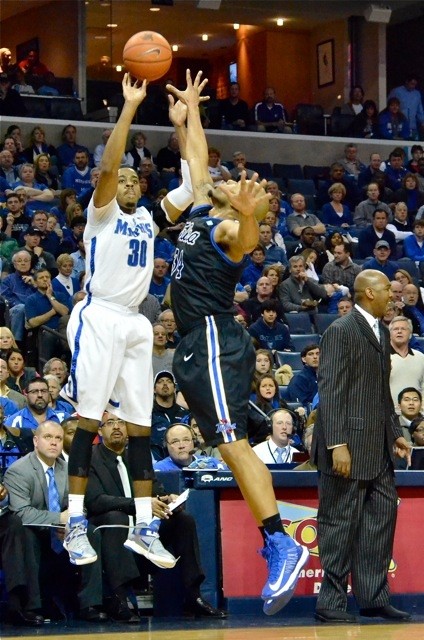 "That was a good 40 minutes of basketball, a good win for us," said Memphis coach Josh Pastner. "We still have room for growth, but we got the W. We put two halves together."

Pastner wouldn't allow his squad — notorious this winter for taking large leads then watching them disappear — to backpedal against an outsized Tulsa team. Barely two minutes into the second half, he didn't like what he saw, so substituted five players from the bench as a single unit. "I didn't feel like we came out with the intensity we should," said Pastner, "so I made the change. And that group extended the lead."

That group — Tarik Black, Chris Crawford, Antonio Barton, Ferrakohn Hall, and freshman Damien Wilson — delivered a 15-5 run over the game's next six minutes to extend the Tiger lead to 27 (66-39). The last 12 minutes of the game were essentially garbage time. But garbage time dominated by the Tigers.

"We play a lot better when we go out there and have fun as a team," said Stephens. "We play our best basketball when we look to help the next guy out and we play together. A lot of shots were falling for us today. [The Tigers hit a season-high 12 three-pointers.] We showed everybody that we could put two halves together. Everybody was just having fun. It's like a domino effect."

Supplementing Stephens' starring role were Barton (a game-high 16 points and four treys), Crawford (12 points, three treys, and five assists), and Wilson, who scored five points and grabbed five rebounds in 16 minutes, his most playing time of the season. Ten Tigers played at least 10 minutes and six of them hit at least one three-pointer.

Memphis dished out 25 assists on 32 made field goals and outrebounded the Golden Hurricane, 45-33. If there was a down note, it was junior guard Joe Jackson's streak of games with at least 10 points ending at 16 (he had six in 22 minutes).

With his team now 7-0 in league play, Pastner again defended the integrity of Conference USA, emphasizing that margin of victory (like today's) can be nice, but it's all about accumulating wins, however they come. "Winning 12 straight games is not easy," he emphasized. "There are no freebies. We haven't hit our ceiling . . . we need to keep improving."

"We have to stay focused on the defensive end, and execute on the offensive end," added Stephens. "We've got a big week coming up, with two road games against two good teams. But today was the first game I've seen everybody happy, everybody having fun. We've won games, but we haven't won them the way we're supposed to. Today's game . . . that's what I've been talking about, winning the way we're supposed to."

The Tigers (18-3) travel to SMU for their next game Wednesday night. They'll play at Southern Miss a week from today before returning to FedExForum to face UCF on February 13th.