The Top 15 Memphis Tigers of All Time

Tiger coach Josh Pastner loves D.J. Stephens. And there’s much to love about the gravity-defying senior forward, certainly the most popular Tiger since Joey Dorsey grabbed his last rebound five years ago. Pastner has enjoyed teasing the media this winter by proclaiming Stephens one of the “top five Tigers” of all time. He’ll acknowledge three other top-fives (Larry Finch, Keith Lee, and Penny Hardaway), then leave one slot open for us keyboard-tappers to consider.

The cold truth, of course, is that Stephens isn’t even among the top 15 Memphis Tigers of all time. The program has been too good for too long for a player with Stephens’s limited numbers to qualify among the top ten, let alone a top five. Below is one man’s ranking of the top three Tigers at each of basketball’s traditional positions. Consider it in no way a rebuke of all Stephens has given the 2012-13 Tiger team. It’s more a commentary on the historical strength of a program he’s helped thrive.

NOTE: My one qualifier for this ranking is that a player had to have suited up for at least two seasons with the Tigers. The “one-and-dones” were fun to watch, players like Larry Kenon, Dajuan Wagner, Derrick Rose, and Tyreke Evans. But they don’t belong on this list.

POINT GUARD
1 — Elliot Perry (1987-91)
One of only two Tigers to score 2,000 career points (2,209), Socks led the Tigers in assists and steals all four seasons he played and led the team in scoring his last three seasons. He’s second in career steals (304) and fifth in career assists (546).
2 — Andre Turner (1982-86)
The Little General was the pulse of the Tiger program for a glorious four-year period that included a trip to the Final Four in 1985. He holds the Tiger record for assists in a game (15), season (262), and career (763). Turner averaged 7.7 assists in 1985-86. The highest average since: 6.4.
3 — Alvin Wright (1974-78)
Like the two players above him, Wright led Memphis in assists all four seasons he controlled the ball, but is one of only two Tigers to average more than five assists in three different seasons (the other is Antonio Burks). Wright increased his scoring average from 7.9 as a freshman to 15.5 as a senior. His 1,319 career points rank 15th in Tiger history.

SHOOTING GUARD
1 — Larry Finch (1970-73)
Now and forever, the greatest Tiger of them all. Freshmen didn’t play in Finch’s day, but he still scored 1,869 career points, averaged 23.9 in 1971-72, and remains the face of the fabled 1972-73 team that reached the NCAA championship game only to fall to mighty UCLA. There should be a statue of Finch somewhere, anywhere in Memphis. 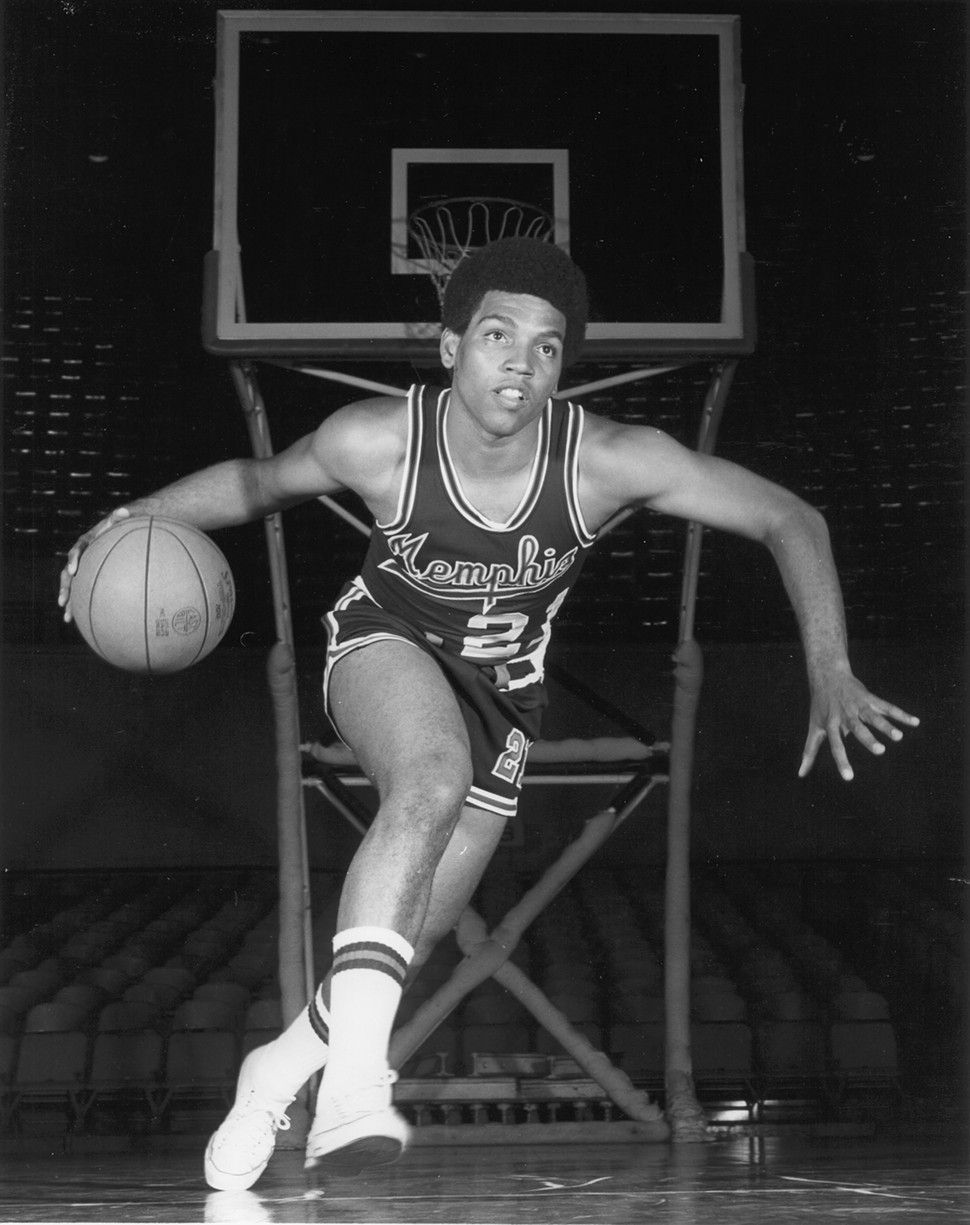 2 — Penny Hardaway (1991-93)
The 1993 first-team All-America could actually fit under any of three positions on this list. Averaged 20.0 points per game over his two seasons while delivering the kind of passes we’ve seen only from the likes of Magic Johnson and Jason Kidd. Twice MVP of the Great Midwest Conference, Penny owns two of the program’s three triple-doubles.
3 — Antonio Anderson (2005-09)
It’s fitting that Anderson has the only non-Penny triple-double in Memphis history. The “glue guy” for a remarkable period that saw a trip to the national championship game in 2008 and two Elite Eight appearances, Anderson is the only Tiger with 1,000 career points, 500 rebounds, and 500 assists. Should have his number hanging from the rafters of FedExForum.

SMALL FORWARD
1 — Rodney Carney (2002-06)
A second-team All-America in 2006, Carney combined the arts of high-flying dunks and three-point marksmanship unlike any Tiger before or since. His 287 career treys are 45 more than the next Tiger on the chart (Anthony Rice). Surpassed 600 points as both a junior and senior. His 1,901 career points are third in Memphis history.
2 — Win Wilfong (1955-57)
A 6’2” swingman, we’ll put Wilfong at forward based on his playing days in the 1950s. Played only two seasons with the Tigers but averaged 22.1 and 21.0 points, leading Memphis to the 1957 NIT championship game. He was the program’s first All-America, earning first-team honors from Converse in ’57.
3 — Chris Douglas-Roberts (2005-08)
CDR is one of only three Tigers to earn first-team All-America recognition from the AP. He averaged 18.1 points per game for the 2007-08 squad that went 38-2 and lost in overtime to Kansas in the national championship game. His 724 points that season are the third highest in the program’s history.

POWER FORWARD
1 — Ronnie Robinson (1970-73)
Larry Finch’s running mate at both Melrose and the U of M, Robinson averaged 14.2 rebounds a game as a sophomore, then 13.3 as a junior. He’s fifth in Tiger history with 1,066 career rebounds and averaged 13.9 points over his three seasons. His number 33 has long been retired by the program.
2 — Forest Arnold (1952-56)
Arnold was the alltime leading scorer at Memphis (1,854 points) until Finch came along. He’s one of only four Tigers to score 1,000 points and grab 1,000 rebounds and starred for the Tigers’ first NCAA tournament team in 1955. For some reason, the school needed until 1995 to retire his number (13).
3 — David Vaughn (1991-95)
Overshadowed first by Hardaway and later by Lorenzen Wright, Vaughn was an integral member of Tiger teams that reached the NCAA tournament’s Elite Eight (1992) and Sweet Sixteen (1995). Despite being limited to three seasons by a knee injury at the start of his sophomore campaign, Vaughn ranks seventh in rebounds (903) and third in blocks (235) on the Tiger chart. 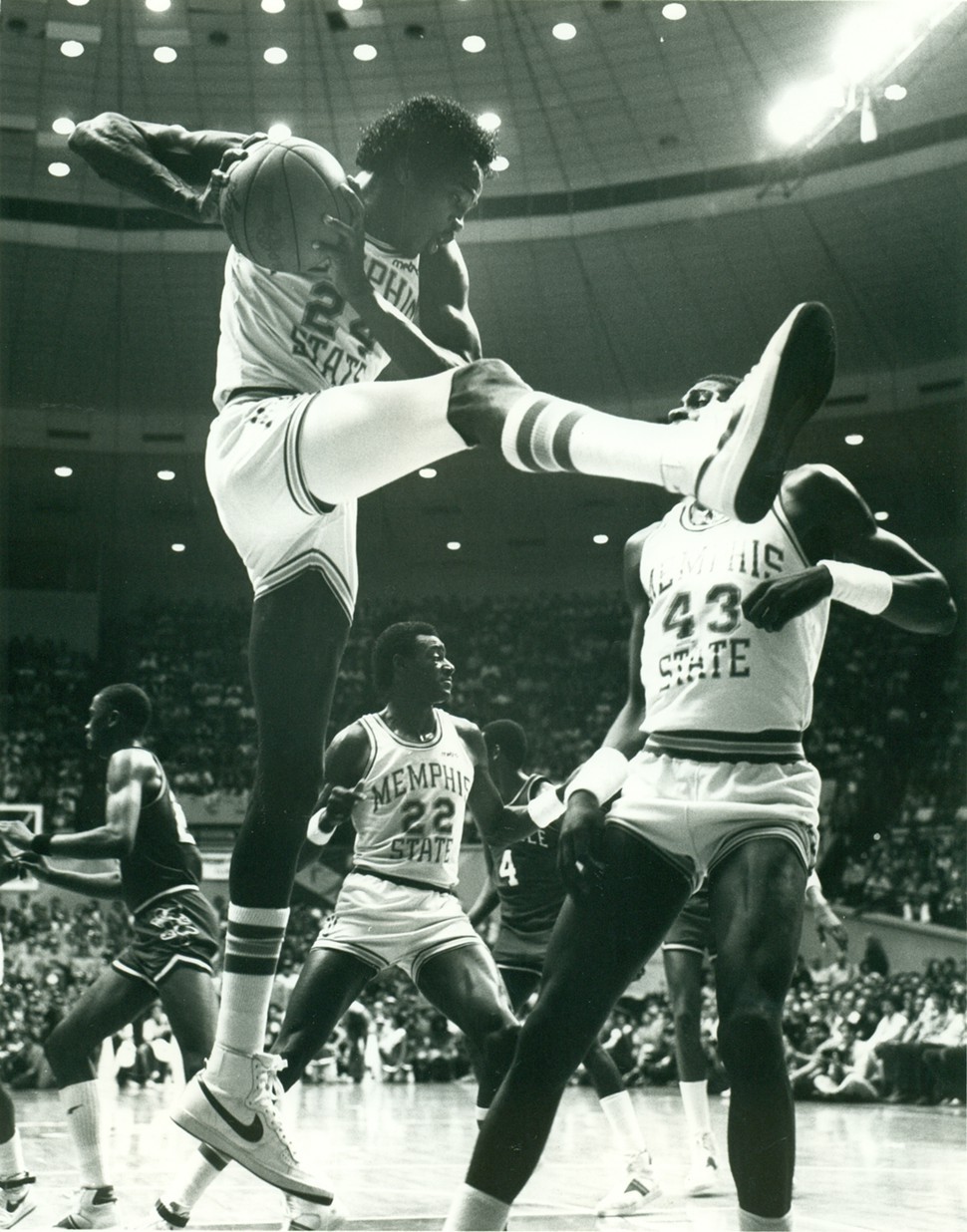 2 — Lorenzen Wright (1994-96)
Among all the Tigers who left school early, Wright is the one I most wish had stayed. He scored 1,026 points and averaged more than 10 rebounds over his two college seasons, during which Memphis went 46-18. He was chosen by the Clippers with the seventh pick of the 1996 draft and played in more NBA games (779) than any other former Tiger.
3 — Joey Dorsey (2004-08)
Twice named C-USA’s Defensive Player of the Year, Dorsey is second only to Lee in career rebounds (1,209) and blocked shots (264). He’s the third member of the 2007-08 NCAA finalists to make this list and arguably the most popular Tiger of this young century. At least until D.J. Stephens arrived.

As for my top five? Forget the order: Finch, Hardaway, Lee, Perry, Robinson.