The Tigers won their second straight Conference USA regular-season championship Saturday with a rather thorough dismantling of the league's second-best team. A midcourt steal followed by a breakaway dunk by junior guard Geron Johnson spurred an 18-3 run to end the first half, giving Memphis a 46-30 lead. Southern Miss would get no closer than 12 the rest of the way as the 21st-ranked Tigers secured their 18th consecutive win and improved to 24-3 on the season.

"To win a conference championship over a two-and-a-half-month period . . . that's not easy to do," said Memphis coach Josh Pastner after the game. "Especially when you're picked to win it, and you're getting everyone's best shot. To fight through all the negativity back in November, to stay together and get to this point is a tremendous testament of character to these young men." 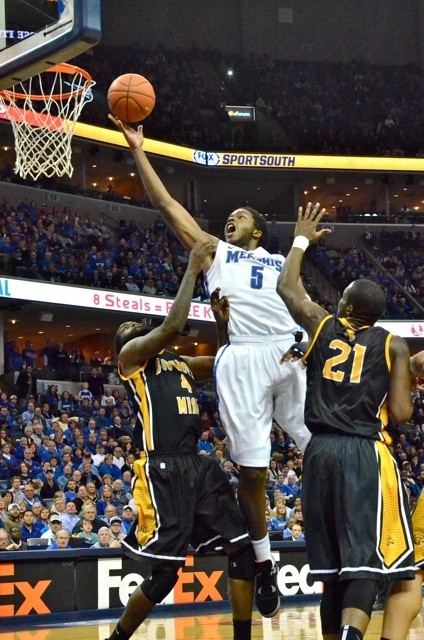 Memphis fans likely saw the last of a longtime Tiger rival as Southern Miss will remain in C-USA when the U of M moves to the Big East next season. The victory was the 40th for Memphis in 48 games against the Eagles here in the Bluff City.

Senior guard Dwayne Davis did all he could to keep things tight, scoring 18 points in the first half and 28 for the game. His efforts, though, were thwarted by a Tiger team that shared the ball exquisitely with 25 assists on 29 field goals. It was the fifth time in seven games Memphis has accumulated at least 20 assists. Johnson had seven helpers, Shaq Goodwin five, and Joe Jackson and Chris Crawford four each.

"We're an unselfish team, spreading the ball around to everybody," said Jackson, who added 15 points to his line. "We feed off each other. When you've got four or five guys who can pass, shoot, and dribble, it makes the game easy. We won a conference championship last year, but it's so different. We pay attention to detail better than we did last year. We're more unselfish. There are good teams and bad teams in the conference; Southern Miss is a good one. But we've got to treat everyone like they're good."

Junior guard Chris Crawford heated up late in the first half, hitting four three-pointers to help fuel the burst before halftime. He finished with five treys (tying a career high) and scored 19 points. D.J. Stephens scored 16 points (three more dunks) and blocked five shots. Goodwin added 19 points, his most since the December 5th win over Ohio.

"Two of our goals before the season were a conference championship and an NCAA championship," said Goodwin. "We got one of them, so let's go on to the next. We know we have a team full of scorers, but we have to play together. This is more than basketball. We decided to look at this as something bigger, like life. I'm from out of town, so these are basically my brothers. Every time we go out there, we say 'Play for your brother next to you.' "

Pastner continues to relish the winning streak, the fifth-longest in the proud history of the program. "It shows you how great this program is, so much bigger than any coach or player," he said. "We've got 18 wins in a row. For most teams, that would be the longest in the history of the program. Here, it's fifth. That's crazy. It shows you how great the tradition is here. You're witnessing some beautiful basketball."

The Tigers won't return to FedExForum until March 9th (Senior Day). They travel to Cincinnati for a rare February nonconference tilt against Xavier on Tuesday. They'll then travel to UCF and UTEP before returning home.

NOTE: Pastner said there is a slight chance junior guard Antonio Barton — sidelined with a broken foot — could return for the March 9th game against UAB. More likely, he'll be in uniform when the Tigers play their first game at the C-USA tournament on March 14th.