This is a big-boy league. Like, the best league in the country. This isn’t the high-school league. Every night, you gotta bring it. Otherwise, you’re gonna get beat. — University of Memphis coach Josh Pastner, March 8th

What a difference a league makes. For the seventh time since 2005, the University of Memphis will host a conference tournament at FedExForum. But for the first time in nine years, the Tigers will not be playing the role of Cosmo Kramer in a dojo full of middle-school karate students. The American Athletic Conference, let it be said one last time, is not Conference USA.

In winning the last five C-USA tournaments in Memphis, the Tigers won all 15 games they played, the closest margin of any contest being a 10-point victory over Tulane in the 2009 quarterfinals. Memphis won those five championship games by the following point totals: 11, 12, 26, 25, 26. It’s highly unlikely the 2014 Tigers win this week’s championship game by 11 points. But you can take this to Tunica: they won’t win it by 26. 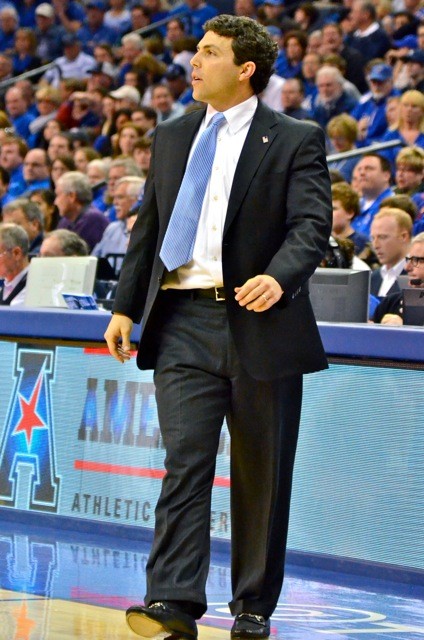 The best way to contrast a C-USA tournament with this week’s AAC event is the tip-off times for the respective title tilts. Fans had to be in their seats at 10 a.m. to see the Tigers whip Tulsa in consecutive years (2008 and ’09), not exactly prime time by the standards of CBS and its viewership. This Saturday’s championship will be televised by ESPN, and will tip off at 5 p.m. locally, 6 p.m. in the center of the American media universe.

Best of all, ironically, may be the fact that Memphis will be an underdog in every game it plays. First Connecticut this Thursday night (8 p.m.), then presumably Cincinnati in the semifinals if the Tigers can beat the Huskies. The U of M, of course, is 0-4 this season against those two teams. Win those two and the reward could be epic: Louisville. The Tigers last played the Cardinals for a tournament title in 2005, “the Darius Washington Game” at FEF. Memories are there to be made. Unlike the C-USA era in these parts, they’ll be rigorous in the making.

• It seems unlikely the Tigers will place a player on the AAC’s all-conference first team. It would be only the second time in the last nine years Memphis hasn’t had a player so recognized. (Once again, this ain’t C-USA.) There are three locks for the team, all of them guards: Louisville’s Russ Smith, Cincinnati’s Sean Kilpatrick, and UConn’s Shabazz Napier. Among forwards, UCF’s Isaiah Sykes (16.4 points and 7.1 rebounds per game) and Houston’s TaShawn Thomas (15.5 and 8.0) would seem to have an edge on Tiger sophomore Shaq Goodwin (11.9 and 6.6). Memphis has leading candidates, though, for both the league’s Rookie of the Year (Austin Nichols) and Sixth Man Award (Michael Dixon).
UPDATE: Goodwin and Joe Jackson were named to the AAC's all-conference second-team Tuesday. The first team: Smith, Kilpatrick, Napier, Louisville's Montrezl Harrell, and SMU's Nic Moore. On Wednesday, Nichols was named ROY and Dixon received the Sixth Man Award.

• Aside from two fan bases, anyone associated with the AAC — particularly commissioner Mike Aresco — has two teams they don’t want to see raising a trophy Saturday night: Rutgers (no worries there) and Louisville. As if Memphis fans needed another reason to grind teeth over the Cardinals, the sight of Rick Pitino’s club leaving for the Atlantic Coast Conference with the first AAC tournament championship might induce dry heaves. The Big Ten can have the Scarlet Knights. Hate Louisville all you want, but the AAC will be diminished without the Cardinals.

• Why isn’t there a banner at FedExForum honoring the Memphis teams that won tournament championships? These are significant — they still bring an automatic NCAA tournament berth — but seem lost to history among all the NCAA tournament and NIT banners. I suggest a single banner, with the years the Tigers raised a trophy. (They won the 1929 Mississippi Valley Conference tourney, then four Metro titles and seven C-USA championships.) These would seem to be happier reminders of a proud program’s history than, say, back-to-back appearances in the 1990 and 1991 NIT. Ask Elliot Perry what he thinks of those banners.