With former Poison frontman Bret Michaels serving as a Friday-night opening act, the Memphis Tigers had a spotlight unlike many in the recent history of the football program. It took a while for their high-scoring offense to warm up, but the Halloween tilt with Tulsa proved, indeed, nothing but a good time.

After falling behind 14-3, the Tigers scored 17 points over the last 8:10 of the first half, capped by a 51-yard touchdown run by Brandon Hayes, the longest of the senior's career and the first of three scoring jaunts he had for the night. Defensive end Martin Ifedi tied the U of M career record for sacks with the 21st of his career and kicker Jake Elliott delivered four field goals — two of them longer than 50 yards — as the Tigers improved to 5-3, just one win shy of bowl eligibility for the first time since 2008. 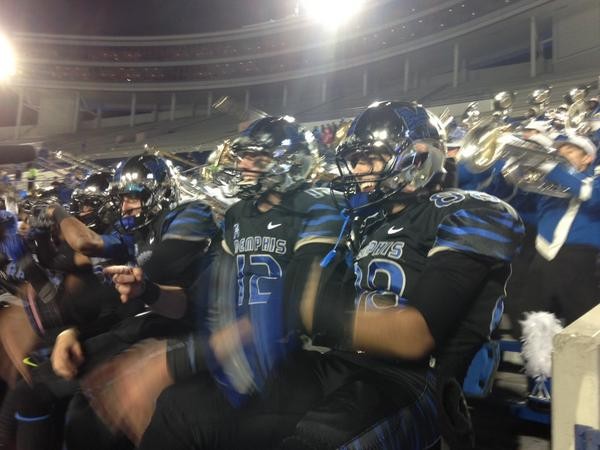 "[Tulsa] is a tough squad, and they're playing their tails off," said a gracious Tiger coach Justin Fuente after the game. (Fuente played high school football for current Tulsa coach Bill Blankenship.) "They're playing with a bunch of young kids, and a bunch of guys who are beat up. They're going to be a dangerous team in the coming years. I couldn't be happier to get out of this game with a win. Our kids didn't panic when things weren't going well. We were prepared for a dogfight tonight."

This being Halloween — the Tigers' first game on the holiday in 16 years — Charlie Brown would have described the third quarter as less a dogfight and more of "a rock." Tulsa punted six times and Memphis four in 15 minutes of play that took almost an hour off the lives of participants and the 26,846 fans who braved the chill. Two Elliott field goals — one from 47 yards, the other from 51 — ended the only punt-free drives of the period.

Hayes put the game out of reach with a 30-yard scamper with 10:06 left in the game. The 14-yard touchdown he scored with 2:50 to play gave Hayes a career-high 197 yards for the game, and gave Memphis precisely the number of points the Tulsa defense has allowed, on average, in eight games this season. (The Golden Hurricane fell to 1-7.) "This team is different from all the teams I've played for," said Hayes. "We have something special going on, in all phases of the game. It's a great feeling, going into the next four games with a winning record."

Hayes smiled when asked about his long runs and record night. "I wasn't thinking about the yards, just getting into the end zone," he said. "I felt like I needed to do something [before halftime]," he said. "I saw a little crease, and made a play. To be honest, I thought someone was backside, about to tackle me the whole time. I just focused on not fumbling the ball."

Tiger quarterback Paxton Lynch completed 18 of 31 passes for 183 yards and scored the Tigers' first touchdown of the game, his seventh rushing TD of the season. The Tiger offense gained 426 yards (to 411 for Tulsa), but struggled on third down (6 for 17).

The Tigers play again next Friday night (at Temple), the first of four games to build their bowl resume. You can hear Bret Michaels, can't you? The Memphis Tigers have something to believe in.