Tiger coach Justin Fuente calls it a weekly "quest to go 1-0." With their win today over the South Florida Bulls at the Liberty Bowl (in front of 34,635 fans), Fuente's Tigers have fulfilled that quest five weeks in a row, earning the Memphis program eight wins for the first time since DeAngelo Williams's junior campaign of 2004. It's the program's first five-game winning streak since Williams was a sophomore.

After spotting the Bulls an early 3-0 lead, the Tigers scored on consecutive first-quarter possessions, quarterback Paxton Lynch running the ball into the end zone to culminate each drive. (Lynch's 10 rushing touchdowns this season ties a Memphis record for quarterbacks set in 1961 by James Earl Wright.) In addition to the two touchdowns on the ground, Lynch passed for a pair, a 42-yarder to Mose Frazier in the second quarter and an 11-yard toss to senior tailback Brandon Hayes in the third. This was the sixth game of the season Lynch has both run and passed for touchdowns. Hayes rushed for 189 yards on 21 carries, the second-highest total of his career.

Down 28-13 midway through the third quarter, USF drove the ball inside the Tigers' 20-yard line, only to turn the ball over on a fumble forced by sophomore linebacker Jackson Dillon. It was the last time the Bulls threatened before scoring in garbage time.

The victory improves the Tigers' record to 8-3 and secures a tie atop the American Athletic Conference with a league record of 6-1. Memphis will clinch at least a tie for the AAC championship with a win next Saturday against Connecticut.

"There's no superstar on either side of the ball," said Fuente after the game when asked how the 2014 Tigers will be defined. "This group is selfless, and they're very good listeners. That's an important trait." 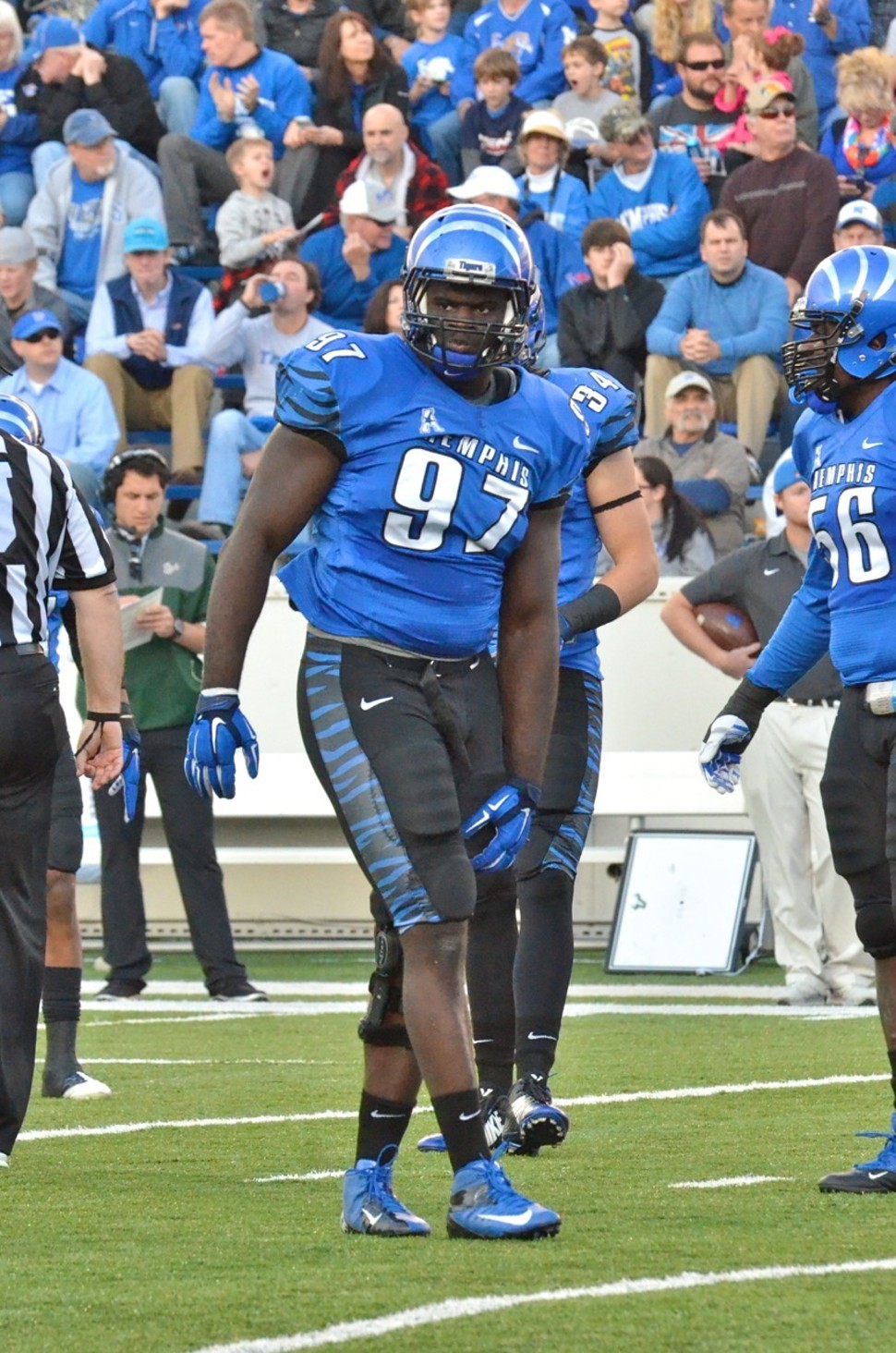 Among the faces of the team will be senior defensive end Martin Ifedi. With the game in hand, Ifedi broke through the USF line in the fourth quarter to sack USF quarterback Mike White. The tackle gives Ifedi 22.5 sacks for his career and places him alone atop that chart in the Memphis record book. "It's a great feeling," said Ifedi. "[My teammates] knew how much this meant to me. We've joked around since the offseason. I was kind of afraid we'd get a penalty for excessive celebration."

The sack was but one of eight tackles-for-loss accumulated by the Tiger defense, which still allowed 396 yards for the game. (The Tigers gained 470 on 19 fewer plays.) Senior linebacker Tank Jakes contributed eight solo tackles.

Lynch completed 18 of 23 passes for 232 yards and didn't throw an interception for the fifth straight game. "The past two weeks, Mose has managed to slip by the defense and I've been able to find him," said Lynch. "We're gonna enjoy this tonight, but tomorrow we'll get right back to work. UConn got us pretty good last year.

With one home game left in his college career, Ifedi smiled when asked to reflect on the growth he's seen since the Tigers went 2-10 his freshman season (2011). "The young guys know what it takes now. We have great coaches who came in and showed us the vision. We implemented the plan in the offseason, and were consistent [with our work] in the offseason. [Coach Fuente] doesn't tolerate certain things. We understand what he wants. We play hard on the field for each other."

The Tigers return to the Liberty Bowl next Saturday to host the Huskies on Senior Day. Kickoff is scheduled for 3 p.m.