A pair of key players returned to form Saturday afternoon at FedExForum and helped the Tigers to an easy win over the UCF Knights. Dominating the glass with a 53-24 rebounding advantage, Memphis cruised to its third straight win to improve to 11-6 on the season and 4-2 in American Athletic Conference play. 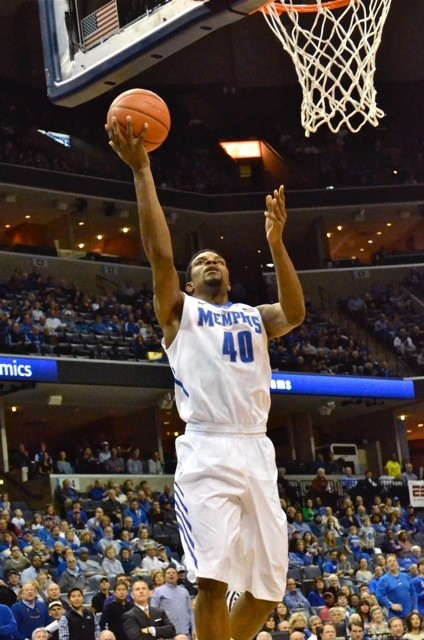 "We had a good day of practice after the Cincinnati game," said Goodwin. "We knew [UCF] had great young guards, so we keyed on them and ended up winning." The Knights' high-scoring backcourt did not hit a three-point shot until late in the first half, held in check by the perimeter defense of Markel Crawford, Avery Woodson, and Pookie Powell. UCF missed 15 of its first 18 shots from the field, then hit 20 of 30 second-half shots, but never closed the scoring margin to less than 10 after halftime.

With Calvin Godfrey contributing a block, a jump shot, and two layups, the U of M raced off to a 13-3 lead over the game's first four minutes. Woodson drained a three-pointer with 1:05 left before halftime to essentially put the game out of reach at 39-23.

Trahson Burrell was the Tigers' third star off the bench with 11 points, 12 rebounds, and five assists in 28 minutes. It was the junior's second double-double as a Tiger.

King is especially pleased to be back in close-to-full form after nursing an ankle injury since late December. "I'm feeling more comfortable," he said. "Dealing with an ankle injury is a nag. I'm 100-percent now, but I've got to get comfortable doing what I was before the injury. It's doing little things that were hurting [during the injury], and they're not anymore. I just have to get comfortable. I'll stay positive and keep working."

Eleven Tigers played at least nine minutes, suggesting coach Josh Pastner's rotation may actually be expanding as the season gets later and the roster gets shorter (with the dismissal of Kuran Iverson). The Tiger bench scored more than half the team's points (56), contributing mightily to the U of M's largest point total of the season.

Daiquan Walker led UCF (off the bench) with 18 points and B.J. Taylor added 17. UCF has now lost 17 of 18 meetings with Memphis.

The victory for the Tigers sets up a showdown next Wednesday against league-leading Tulsa. The Golden Hurricane improved to 5-0 in AAC play with a win over USF today and has won seven straight games overall. Memphis then travels to New Orleans to face Tulane on January 24th.