The Memphis Tigers withstood a second-half barrage of three-pointers by the overmatched East Carolina Pirates to win their second straight game and finish the first half of their American Athletic Conference schedule with a record of 6-3 (13-7 overall). Down 15 at halftime, ECU hit eight of its first 12 attempts from beyond the arc in the second half to close the deficit to merely five (61-56) with 4:30 to play. But the U of M scored nine of the game's final 11 points to secure its 12th double-digit win of the season. 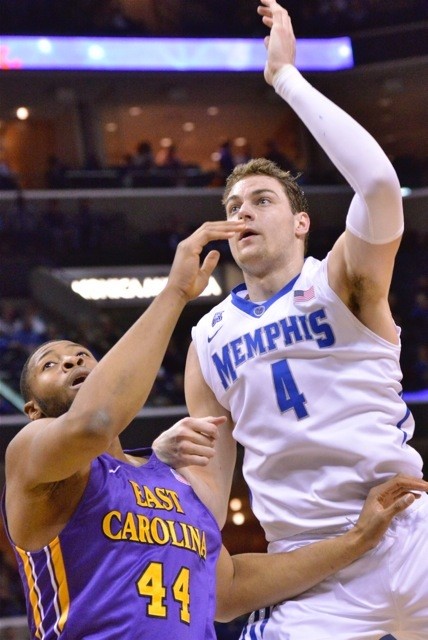 "They were on fire in the second half," acknowledged Tiger forward Austin Nichols, who scored a game-high 21 points. "We just gotta finish games better. Markel [Crawford] and Avery [Woodson] were hand-in-their-face, up under the shooter. But they were just knocking them down. They're one of the best three-point shooting teams in our conference." Terry Whisnant led the way for East Carolina with five treys (on seven attempts) and 17 points. Five other Pirates connected from long range, with Caleb White adding 10 points. ECU's 13 three-pointers are the most Memphis has given up this season. Add six treys by the Tigers and the game featured more total long-range field goals of any Memphis game this season.

A furious end to the first half seemed to secure the game for the Tigers after 20 minutes. Trahson Burrell slammed home a lob from Avery Woodson, then dunked on a breakaway feed from Woodson before Nick King drained a three-pointer for a 39-24 lead. (King scored 11 points and grabbed seven rebounds in 19 minutes after not playing in the Tigers' win last Saturday at Tulane.) But four Pirate three pointers in the first six minutes of the second half closed the margin to seven points. A steady, efficient Tiger offense (19 assists, six turnovers) prevented what would have been an ugly loss in front of 13,335 fans at FedExForum.

"We were smart with the basketball, took care of the basketball," said junior guard Kedren Johnson (seven points, two assists). "They hit a lot of tough shots, with hands in their faces. I don't think our energy was as good as it's been recently, but taking care of the ball kept us in the game, and ultimately got us the win."

Johnson insists a conference championship remains a goal, though he knows his team will have to perform better than 6-3 over the second half of the AAC season. "It's just giving ourselves a chance. We need to keep ourselves within striking distance." The Tigers remain three games behind first-place Tulsa in the AAC loss column.

Burrell scored 11 points for the U of M and six different Tigers had at least two assists (Woodson led the way with five). Memphis dominated the Pirates in the paint, 34-12.

The Tigers next take the floor Saturday night in Spokane Washington, against the third-ranked Gonzaga Bulldogs. The game is scheduled to tip off at 9 p.m. locally and will be televised on ESPN2.

NOTE: Junior forward Shaq Goodwin started the game for Memphis, (his first start since January 8th), but went to the bench after turning an ankle with just 19 seconds expired. He expects to play against Gonzaga.