If Pastner Leaves, Should Penny Hardaway Coach the Tigers?

April 08, 2016
11 comments
Editor's note: With the reports today that Josh Pastner is in negotiations with Georgia Tech for its coaching job, we thought it would be a good time to revisit Frank Murtaugh's look at Penny Hardaway prospects for Pastner's job. — bv

The dots are easy to connect.

One of this city’s most prominent jobs, currently held by a man under the kind of public scrutiny unfamiliar to most people not living in the White House.

One of the city’s most famous and popular citizens, doing precisely the same job (and doing it well) a tier below.

There are Memphians who would claim Anfernee ‘Penny’ Hardaway was born to coach the Memphis Tigers. And many of those same Memphians would say the Tigers’ current coach, Josh Pastner, was a fish out of water the day he took the job in 2009 upon John Calipari’s departure for Kentucky. Now in his seventh year in a seat that’s always hot, Pastner is enduring a 14-11 season that, barring an AAC tournament championship, will end short of an NCAA tournament bid. At most home games, sitting directly across the FedExForum court from the 38-year-old Pastner is the 44-year-old Hardaway, his retired jersey hanging from the rafters above. It should be noted Hardaway attends Tiger games more regularly these days than many season-ticket holders from Pastner’s first few seasons in charge.

Will Penny Hardaway coach the Memphis Tigers? If so, how soon?

These questions have certainly occurred to U of M athletic director Tom Bowen. If Pastner is dismissed at the end of the current season, the university will owe him $10 million, money committed to the coach (through the 2019-20 season) in the contract extension he signed in 2013. That’s a lot of lunch money to pay a man not to work for you. But at what point does Pastner end up costing the university more than $10 million in lost revenue from ticket sales, sponsorships, donations, and advertising? This is nightly math homework for Bowen and his staff as the local Tiger basketball community grows more and more divided over the direction of its beloved program.

For the purposes of this column, let’s ignore that math and just focus on the Tigers’ coaching needs. In this hypothetical, Pastner departs, takes a season away from the game, and lands in a new environment more comfortable for himself and his growing family.

Should Penny Hardaway be hired to fill the vacancy? And if asked, should he take the Tiger job? You decide.

• NO
I covered the Tigers over a four-year run (under Calipari) that saw the team win 137 out of 151 games. That’s a winning percentage of 91 percent. And there were Tiger fans who never liked Calipari. “The miserables,” he called them. And Calipari, love him or loathe him, was a salesman in ways Penny (or Josh Pastner) will never be.

This is a hard job. The day he takes the seat, Penny goes from being the first-team All-America, first-team All-NBA superstar to first-team Media Magnet. He’ll be expected to answer every question and absorb every criticism with the same dexterity he dribbled the length of the court as a one-man fast break. He will have to cater to the whims and desires of 18-year-old boys, every last one dreaming of being “the next Penny” in a town where we’ve already seen the last Penny. He’ll have to make promises he knows can’t be kept, whether it’s punching a recruit’s ticket to the NBA or a sponsor’s request to attend his son’s birthday party.

To date, Penny Hardaway has been as generous to his hometown as any sports celebrity Memphis has produced. (See the Hardaway Hall of Fame on the U of M campus.) Having made more than $100 million in an NBA career sadly abbreviated by lingering knee trouble, Hardaway is sharing his wealth with the community that helped raise him. But he’s done all this good, for the most part, on his own schedule, at his own pace. That changes the day he becomes head coach at his alma mater. The four scariest words for anyone in a new job: Expectations must be met. Penny Hardaway would start his college coaching career with the same number of wins Pastner did: zero. 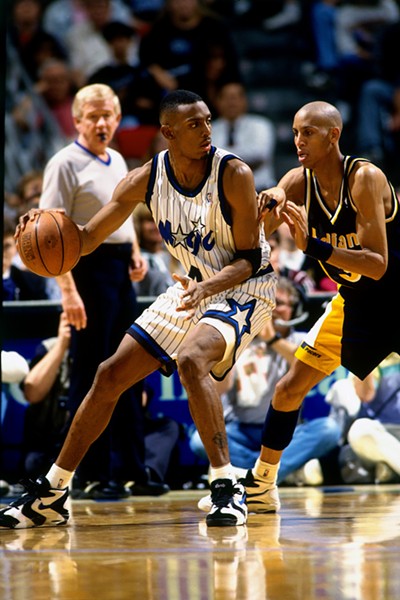 • YES
Hardaway would sell out FedExForum. And he would sell out the arena regularly, win or lose. He would bring star power to the head coach’s position greater than any of his predecessors, including Calipari (whose career was flatlining before he took the Memphis job) and the late, great Larry Finch. In a sport where the coach is the face, body, and spirit of a team, Penny Hardaway would be made-to-order as the university’s new promotional centerpiece.

As a recruiter, Hardaway would be pursuing players born after his mid-Nineties NBA peak. But he'd have a hook very few of his competitors share: YouTube. Few players in basketball history — including those with much longer pro careers — pack five minutes of highlights the way Penny Hardaway did. When high school stars check out the bona fides of Coach Hardaway, they'll find themselves staring at plays they can but dream of making. If Hardaway could see a basketball court the way he did as one of ten players on the floor, perhaps he can see the court differently from the sideline, too. That would be a vision worth following.

A charming component to the Hardaway coaching candidacy is the legend’s legwork at building his credentials, first at Lester Middle School (where he answered the call of a dying friend), and now at East High School. Should he take the Tiger job, it would not be mere entitlement, the most famous basketball player in Memphis agreeing to coach his alma mater back to glory. A college coaching position is, in fact, the next logical step in Penny Hardaway’s post-playing career. If he’s to take such a job anywhere, why not Memphis?