Josh Pastner was 14 years old when Tubby Smith presided over his first college basketball game as a head coach. The more telling number is Smith's age (40) when he first walked the sideline — in 1991 —  as coach of the Tulsa Golden Hurricane.

In naming Smith the 18th men's basketball coach in Memphis history today, the powers that be at the university chose a career profile that couldn't be more different from that of Smith's predecessor. Whereas Pastner had no head-coaching experience when he was given the job (in 2009) at age 31, Smith has 25 seasons of Division I head-coaching experience on his resume and has taken five programs — Tulsa, Georgia, Kentucky, Minnesota, and Texas Tech — to the NCAA tournament. He won a national championship at Kentucky in 1998, his first of 10 seasons at the helm in Lexington. (Smith's departure from Kentucky in 2007 led to the departure of John Calipari from Memphis two years later). At age 64, Smith becomes the oldest basketball coach in Tiger history. 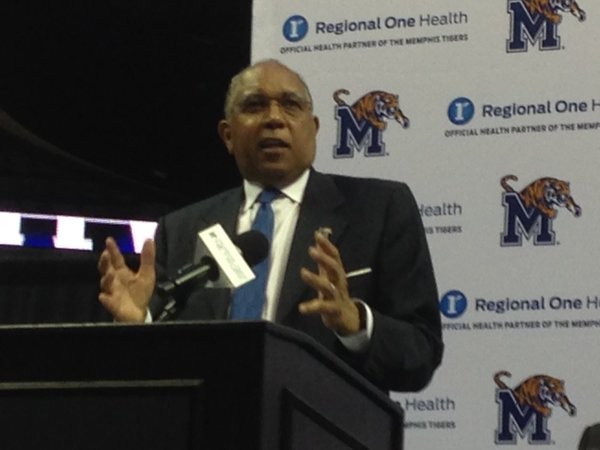 Smith won the 2003 Naismith Coach of the Year award at Kentucky and was named SEC Coach of the Year three times. He earned Big 12 Coach of the Year honors this year for having led Texas Tech to a 19-13 season in the nation's toughest conference. (The Red Raiders lost to Butler in the first round of the NCAA tournament.) Smith's overall record is 557-276. He was an assistant coach for the gold medal-winning U.S. Olympic team in 2000.

Some highlights from Smith's remarks at his introductory press conference:

"Our philosophy has always been big on love, family, and discipline. You can imagine, growing up in a household with [15] siblings, that was a focal point. You can't survive, prosper, and grow without love."

"Everyone I've coached and taught as a teacher, I love them all. I may not have liked everything they did, but I've loved them all. I was blessed to have parents who made me go to Sunday school. You have to have some values."

"You don't become successful without surrounding yourself with people whose goals are at least equal to yours, or greater. I'm a blue-collar worker. We put on our practice gear and we work with these young men. I just got to meet our present players, and they're fine young men. We talked about goals: our basketball goals, our social goals, our academic goals, our spiritual goals. There's a lot of pride in this program and university."

"My dad told me that if you cut grass the right way, you'll always have grass to cut. You'll have a job."

"When you see this team play, you'll leave saying they played hard, played together, and played smart. That's what we preach and teach. The fundamentals of the game are critical."