With the Memphis Tigers opening their 2016-17 season tonight at FedExForum (welcome, Texas-Rio Grand Valley), here's a short wish list for a program on the rebound from two postseason-free campaigns. And remember: anything's possible.

• Avoid ugly losses. However bad things appeared for Josh Pastner and the 2015-16 Tigers, a home loss to East Carolina last January made it clear something was wrong with the water. Later losses at Tulane and USF firmly placed Memphis in the bottom half of the American Athletic Conference. The Tigers split with each of these teams, making the defeats all the more maddening. Had the U of M swept each of these less-than-stellar clubs, a 19-win season becomes a 22-win campaign with at least an NIT bid in the mix. The Tigers have been picked to finish fifth in the AAC, and this seems about right. Handle the bottom-feeders. 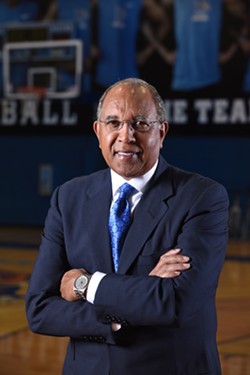 • Let Dedric Lawson shine. This starts with keeping the AAC's preseason co-Player of the Year healthy. Some pulse rates increased at FEF last week when Lawson had to briefly leave the floor after what appeared to be a lower-leg injury. He returned and proceeded to finish the game with (ho-hum) 11 points and 13 rebounds. You have to believe Lawson will be in good hands under the watch of Tubby Smith. Over-use on a team that desperately needs him to perform could be deadly. Proper use, though, could make him the kind of impact player that earns All-America votes. And, not incidentally, attention in the NBA draft.

• A surprise stand-out. This team will need at least one under-the-radar player to become a significant member of the rotation. (Remember D.J. Stephens? You surely remember the junior and senior; highly unlikely you noticed the freshman or sophomore version.) Chad Rykhoek has the size to make a big difference, particularly at the defensive end. Jimario Rivers, likewise, could make the Memphis defense more formidable. Would a steady and productive Jeremiah Martin at point guard be considered a surprise? Expectations and needs are one thing (and Martin's role is critical for the Tiger offense). Performance is another metric entirely.


• 89 three-pointers by Christian Kessee. This would give the senior transfer one more than he had last season at Coppin State, and 12 more than the Tigers' top gun last season (the departed Avery Woodson hit 77, 32 more than any teammate). Dedric Lawson's life will be miserable if the Tigers don't establish an outside-shooting threat. Markel Crawford is not going to learn to be a sharp-shooter as a redshirt-junior. Martin hit six of 20 shots from downtown last season, K.J. Lawson just two of nine before being sidelined by injury. I wouldn't be surprised if Kessee finishes second (or even first) on this team in minutes played. His marksmanship is that important.

• Earn a big win, anywhere. The Tigers don't have what you'd call an imposing schedule. Only one team in the preseason AP Top 20 is sure to face Memphis: 18th-ranked UConn on January 5th (at FEF) and February 16th (at Storrs). The Tigers could face 8th-ranked Virginia — with one Austin Nichols — on November 26th, but this depends on how the bracket unfolds at the Emerald Coast Classic. So the Tigers' big win (loosely defined now) may depend on the AAC standings. If Cincinnati is at or near the top of the league when Memphis travels to Ohio on February 23rd, a Tiger upset would be huge. (The Bearcats don't come to Memphis this season.) Same goes for Houston, and the Cougars visit FedExForum on February 26th (a Sunday afternoon tip-off). Memphis swept the defending national champs in both 2013-14 (Louisville) and 2014-15 (UConn). The program is thirsty for an attention-grabbing upset.