March 06, 2017
comment
The Tigers' 2016-17 season will probably end this week in Hartford, at the American Athletic Conference tournament. (Memphis faces UCF Friday afternoon in a quarterfinal matchup.) Barring a run to the final, an NIT bid is unlikely for a team that lost six of its last eight regular-season games and suffered what amounted to a lesson in the sport from SMU in last Saturday's 41-point evisceration.

The first year of the Tubby Smith era hasn't been all gloom, though. Hardly. As with most seasons, some things went right, others wrong. Here's a slightly premature season recap.

• RIGHT: Dedric Lawson
He doesn't star in the ACC or Big Ten, but let it be said: Dedric Lawson has had one of the best individual seasons in the country, and one of the most memorable in the rich history of Memphis Tiger basketball. The 19-year-old sophomore led the AAC in rebounding (9.9 per game) and finished second in scoring (19.4 points per game). He finished fourth in the league in blocked shots (2.1) and even ranked 13th in assists (3.3). He has created a category of one at the U of M as a 500-300-100 player: 500 points, 300 rebounds, and 100 assists in the same season. The sport will be cheated if Dedric Lawson never plays in an NCAA tournament game, a scenario that today looks probable.

• WRONG: Distance shooting
This proved to be the most predictable shortcoming for a team that had a few. The Tigers' short bench? It wouldn't have been as short had Christian Kessee (23 percent) or Craig Randall (29 percent) seized the role of three-point marksman. The team's starting guards weren't much better, Jeremiah Martin shooting 28 percent from three-point land and Markel Crawford 34 percent. Overall, the Tigers finished last in the AAC with a long-distance mark of 30 percent. Which makes Dedric Lawson's season all the more remarkable. Teams could sag (and double-team Lawson) freely, knowing there was virtually no threat from the Tiger perimeter. And three-point shooting was the lone area Dedric Lawson didn't master (27 percent). 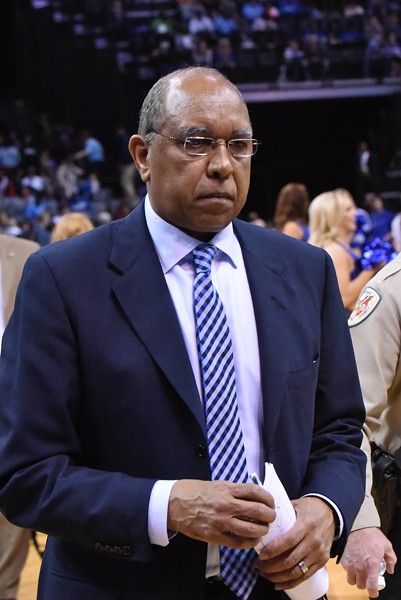 •RIGHT: Tubby's touch
The Tigers new coach was "new" only as measured by his tenure in Memphis. He brought a professorial aura to the Memphis program the day he was introduced (April 14, 2016) at FedExForum. And he didn't promise more than he could deliver. "We have our priorities and our goals," he told me last November. "They're pretty high, but they're realistic." On his way to the Tiger bench before every home game, Smith would shake hands with the game-day stat crew. Every home game. It's the kind of thing a coach does at the start of the season (maybe) as a formality. For 18 games? This was genuine Tubby, who brings more to the Memphis program than a win total will ever reflect.

• WRONG: Senior rookies
Chad Rykhoek and Christian Kessee were brought in to make a difference in the one year they could suit up as Tigers. The injury-plagued Rykhoek went down with an ugly ankle injury in the Tigers' 11th game. Kessee simply never found the marksmanship he displayed in the 2015-16 season at Coppin State, when he buried 88 three-pointers and made 39 percent of his shots from long range. These two were swing variables for the Tiger roster, and they swung the wrong way.

• RIGHT: Jeremiah Martin = Point Guard
Whether it was Smith's influence or an exceptional developmental leap over the course of one summer, Martin became a new player last fall, at least compared with the one we saw average 2.7 points and barely an assist per game in limited play as a freshman. Martin has averaged 4.5 assists this season and ranks fifth in the AAC in  assist/turnover ratio at 2.3. It's scary to imagine Martin making the same proportional improvement next season as a junior. Safe to say, the Memphis point guard position is secured for two more years.

•WRONG: More empty seats
In 18 home games, the Tigers managed to sell 10,000 tickets just seven times. The season high was 12,381 for the Houston game on February 26th. If all 12,381 fans showed up to see that loss to the Cougars, there were still more than 5,000 empty seats yawning at the action on the floor. The elbow room at FedExForum can no longer be blamed on a fan base protesting Josh Pastner's presence. But the statement those empty seats are making remains the most troubling component for the big picture of Tiger basketball. This season's team suited up a certifiable star in Dedric Lawson and was coached by a man destined for the Hall of Fame. Not enough. Perhaps some families have steered their season-ticket budget toward football. The continued success of the Grizzlies — in the same building, during the same winter months — has surely impacted the economics of U of M hoops. Whatever the factors, athletic director Tom Bowen and Smith need to consider how to improve the atmosphere of college basketball at Memphis. (A wild thought: The next time Savannah State comes to town, play the game at the Elma Roane Fieldhouse. A packed crowd of 2,500 can bring more than an empty-looking 9,000 in an NBA arena.)

• RIGHT: Markel Crawford and K.J. Lawson
Remember Crawford's 28 points in the win over South Carolina? How about the 30 he put up against USF in mid-January? On these nights, the Tigers were a two-star team, and looked like AAC title contenders. As for the older (though freshman) Lawson brother, K.J. had a game at Houston in January that would make his brother proud: 28 points, 16 rebounds, 5 assists. In the Tigers' win over East Carolina, he had 12 points and 19 rebounds (more than Dedric has ever pulled down in a single game). If K.J. was "the other" Lawson, he was quite a bonus for this team, finishing third in the AAC in rebounding (8.3).

• WRONG: Markel Crawford and K.J. Lawson
Where did they go? Crawford didn't score (in 26 minutes of action) in the loss at UCF that started the Tigers' season-ending tailspin. The junior went scoreless again at Cincinnati (in 25 minutes) in a game he was desperately needed for Memphis to upset the Bearcats. And K.J.? The word "unbridled" was invented for his approach at times. That game when he pulled down 19 rebounds? Seven of them were offensive, a few certainly resulting from his own misfires as K.J. missed 18 of the 23 shots he took against the Pirates. He was a combined three-for-fifteen from the field in consecutive losses to Temple and UConn. (But then scored 20 to keep the Tigers in the game against Houston on February 26th.)

• RIGHT: 19 wins (so far)
Let's end on a high note, with a dose of perspective. Tulane has played 30 games this season and won six. South Florida finished 1-17 in AAC play. The reviled (in some corners) Pastner earned ACC Coach of the Year honors for guiding Georgia Tech to 17 wins and an 11th-place(!) finish in that esteemed league. Expectations, you see, are everything. And whether expectations in these parts are too high ("Only 19 wins!") or too low (those empty seats at FEF), they tend to run to an extreme. Which beats the hell out of I don't care.

Enjoy this weekend's tourney and the March Madness to come. Many thanks for reading all season long.