"We're excited about the future. Please that we won 19 games this year. We had our ups and downs, and certainly didn't finish the season the way we wanted to. Through it all, I thought our players gave it all they had. We had great support from fans. It's always a process; it takes time to instill certain things we need to have done in the program, to sustain the type of success we expect and this program deserves. 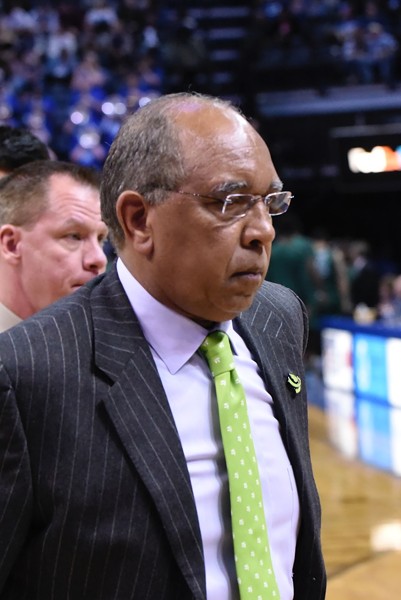 "A team that we beat [South Carolina] is playing in the Final Four. We'd like to be that team next year. We're positioned, with so many players returning . . . we need to add players to that [group] in the late signing period. We have to continue to improve and sell our program to our fan base.

"There are a lot things we have question marks about. We expect everybody to be back unless we hear something different; so far we haven't. I know many people are interested in what Dedric Lawson is going to do. We've talked briefly, and nothing has been decided. Whatever he and his parents decide, I'm going to support them. He's been a major part of this program. He had an excellent season; I'm really proud of what he's accomplished.

"We need to shore up our bench play. We didn't have the kind of players coming off the bench who would give us the energy we need. We have three scholarships available in this late signing period, and maybe more.

"In interviewing our players at the end, they really felt they hit a wall. And that's my fault. Guys played a lot of minutes. Starters averaged over 35 minutes a game. I knew that would be an issue, a concern. I think the people we've already signed will be a big help.

"This season has been a learning experience. It's always difficult for players to adjust to a new staff. Look at a guy like Jimario Rivers, with three coaches in three years. There was going to be a learning curve, and not just for the players."

Are you surprised that Craig Randall chose to transfer?
"I'm never surprised at anything young men decide to do. It was concerns about playing time. You have to earn every minute you get. I wish him the best. He averaged the sixth-most minutes on the team. We'll miss him; he had some big games for us."

In recruiting, are you looking to fill positions or best player available?
"We're involved with a lot of junior college players at this point. We need some experience, guys who are physically ready. We're looking for guys who fit our system, our style of play. We need to fill a guard spot with Craig leaving. We need some size, interior play. A lot depends on what Dedric decides."

Is there a time you need to know Dedric's decision so it won't put you in a recruiting bind?
"He's got until April 23rd, I think, for early entry. It's not the best scenario for coaches. But we want to give our student-athletes a chance to test the waters, find out where they are."

Do you advise players, one way or the other?
"When they ask me. I'd love to have [Dedric] back."

Has Dedric asked for your thoughts?
"To some degree. It's still early. He can call the NBA office. You put in that entry form and they'll give you feedback. The NBA has a committee for players and possibilities with NBA teams."

In watching the teams at the South Regional last weekend, there appears to be a gap with the Memphis program. How far away is the Tiger program?
"Look at South Carolina. If you get a group that buys into what you're doing. It's a process, and you've got to have patience. How far are we away? You've got to have players. That's why we're looking at junior college players. You're probably not going to find a high school player who can [impact immediately]."

What kind of NBA player do you think Dedric Lawson will be?
"I think he's a long-term NBA player. There are things he need to get better at: footwork, outside shooting."

You mentioned some distractions at the end of the season. What can be done to eliminate them?
"We have a multifaceted media. And with so many local players on your team . . . . I need to do a better job of engaging all the entities involved in our student-athletes' lives. Relatives, coaches, everybody. There are a lot of people pulling and talking. You have to embrace it, and get all those people on board. I didn't do a good job with that. It takes about two or three years; to really get to know the community. We're reaching out, doing what we can within the rules. This is a hotbed of talent. We expect to be playing this time of year in the future."

What more can you do personally to promote this team?
"It always helps to go to postseason play. We have to let people know how energized we are. That's why I was away last week, flying around the country. In order to be competitive. And we need to upgrade our schedule, find ways to excite the fans. We play Louisville and Alabama next season, but on neutral sites. We need to get some home-and-home series on the schedule. I was at [the South Regional] last Friday. We want that kind of excitement for every game."