September 28, 2018
5 comments
The notion of Memphis returning to the American Athletic Conference championship game this year was summarily rejected Friday night at Yulman Stadium in New Orleans. The Tulane Green Wave scored touchdowns on three consecutive possessions in the second half, turning what had been a tight game into a rout. The victory is Tulane's first over Memphis since the 2000 season, a span of 12 games for the regional rivals. 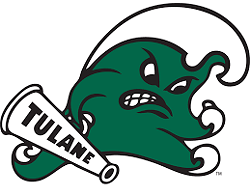 Reserve quarterback Justin McMillan — an LSU transfer — entered the game for the final play of the third quarter and completed a 51-yard pass-and-run to Darnell Mooney for a touchdown that gave Tulane a 24-14 lead entering the fourth quarter. After the next Memphis possession resulted in a safety (on a White fumble in the end zone), Tulane tailback Corey Dauphine struck with a winding, 46-yard touchdown run that made the Tiger defense look both slow and tired. It was the third score covering at least 46 yards for the Green Wave.

Among the only Memphis highlights were a pair of lengthy touchdowns by junior tailback Darrell Henderson. On their first offensive snap of the game, Henderson dashed through the right side of his line for a 47-yard touchdown. Early in the third quarter, he caught a pass from White and sprinted into the end zone to complete a 43-yard touchdown. The scores give Henderson 11 touchdowns for the season (matching his 2017 total) and 31 for his career, the fourth-most in Memphis history. Beyond his two long-distance touchdowns, Henderson was ineffective, gaining a total of 51 rushing yards (on seven carries) and 47 receiving (two catches).

White completed 14 of 30 passes for 246 yards and two touchdowns without an interception.

The loss drops Memphis to 0-2 in AAC play for the first time since the league's inaugural season of 2013. (The Tigers are 3-2 overall.) Tulane improves to 2-3 and 1-0 in the AAC. Memphis returns to the Liberty Bowl for its next two games, Connecticut visiting on October 6th and UCF on October 13th.