October 03, 2018
1 comment
• The Tigers couldn't have scripted a better opponent for this Saturday's game at the Liberty Bowl. It's both a recovery game (after the disaster at Tulane) and a tune-up (with UCF on the way) for Memphis, and the Tigers need to hit a reset button on their season. UConn (1-4) has allowed the most points (267) in the American Athletic Conference (AAC), and by some distance (SMU has surrendered 190).

But here's the catch from the other sideline: Memphis now looks like a soft spot on the Husky schedule. Their losses have been to UCF, Boise State, Syracuse, and Cincinnati. Tiger coach Mike Norvell has emphasized all week how his team can overlook no one. They better not this week, because an undermanned (on paper) foe will be stoked for this clash.

• To his credit, Norvell has owned his team's performance at Tulane. He's come across, honestly, as the most disappointed "fan" in Memphis . . . and that's precisely as it should be. From Monday's press conference: "Part of the reason we are in this situation are things we have allowed to take place and allowed to happen, and it's hurt us in playing to the top level of our ability. We're going to continue to work. We had a good practice [Sunday]. Everyone is owning where we are and what we've done to this point." 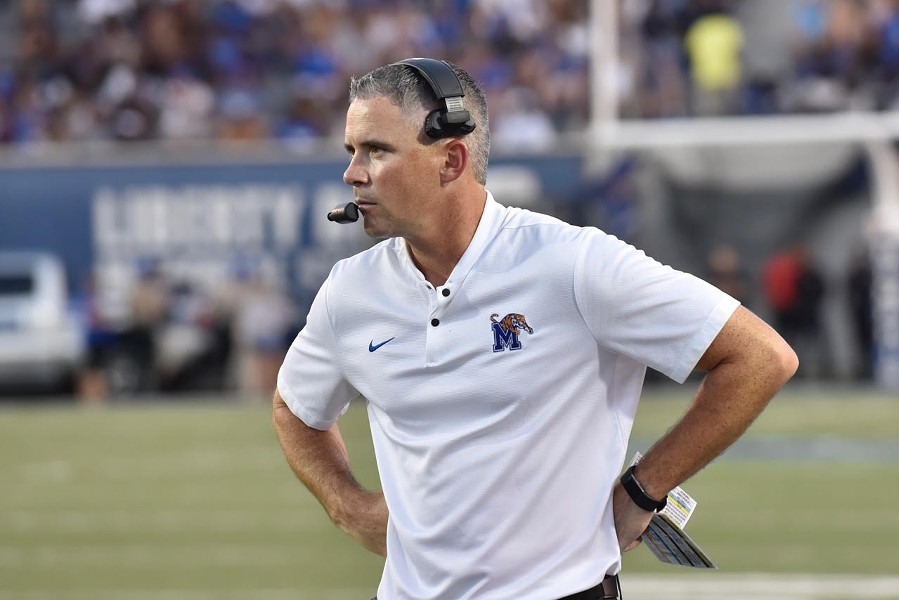 With any painful loss, it's not so much the what, but the why that a coaching staff must address. The defense was significantly short-handed by injuries, particularly the line. (The secondary, minus two starters, looked significantly slower than it has in recent years.)  Tulane's defense managed to bottle up the country's top rusher, Darrell Henderson. Tiger quarterback Brady White was unable to stretch the Green Wave defense by connecting with receivers downfield. These and other factors made for the ugliest outing in Norvell's three seasons as a head coach. Time for that age-old cliche: It's not how hard you fall, but how quickly you get up.

• What has happened to Mid-South football? Memphis fans are pouting over an 0-2 start in the AAC. Ole Miss, Mississippi State, and Arkansas are all 0-2 in the SEC. Tennessee is 0-2 in league play and Vanderbilt 0-1. Six regional programs with a combined league record of 0-11. There's Alabama, of course. (Always Alabama.) LSU, Georgia, and Auburn are also Top-10 teams. But I've bumped into some slump-shouldered football fans as October has arrived. Better days are surely ahead. If nothing else, I know five SEC programs Memphis athletic director Tom Bowen should consider scheduling.