December 15, 2018
1 comment
"Basketball in the state of Tennessee is underrated on a national level." — Tennessee coach Rick Barnes

If the Tigers are to face a stronger tandem this season than Tennessee's Grant Williams and Admiral Schofield, don't tell them anytime soon. The two Volunteer forwards combined to score 48 points to help third-ranked Tennessee control Saturday's contest in front of 18,528 fans at FedExForum. The second-largest crowd ever to see a Tiger game in the arena witnessed a stellar second-half performance from Memphis forward Kyvon Davenport in which the senior scored 26 of his career-high 31 points. Davenport's outburst helped Memphis "win" the second half, but wasn't enough to prevent Tennessee's eighth win in nine games and Penny Hardaway's first home loss as Tiger coach.

"We knew this would be a major game for them," said UT coach Rick Barnes after the game. I don't know if [the players] understand the rivalry, but this is a great basketball town." The loss for Memphis (5-5) ends a three-game winning streak in its series with Tennessee and is the first Volunteer win since January 5, 2011. Tennessee now leads the overall series, 15-11.

"Let's give Tennessee a lot of credit," said Hardaway. "They were aggressive early, got up on us, and never looked back. That's why they're ranked number-three in the nation. The second half is more of what we wanted, but we just couldn't put two halves together. When you give up 102 points on your home floor, you aren't gonna win many of those."

The Vols made their first five shots from the field (three of them from three-point range) to take an early 15-5 lead. Raynere Thornton converted a three-point play with just under 10 minutes left in the opening half to close the Tennessee lead to six points (25-19), but the Vols rode the Williams/Schofield combination to a 15-point margin at halftime. The Tigers missed 12 of their 14 three-point attempts in the half while Williams — the reigning SEC Player of the Year — scored 14 points on his way to 19 for the game.

Davenport did what he could to take over in the second half, hitting 10 of 12 shots, including all three he took from three-point range. But his were the only hot hands among Memphis players. Freshman Tyler Harris and senior Jeremiah Martin combined to make only five of 25 shots from the field, Harris going one for nine from three-point range. "Tyler got some great looks today," noted Hardaway. "Maybe he was too anxious. He's a freshman and we lean on him a lot. We missed the shots we needed to make early."

The game officials made for a significant third team on the floor, calling a total of 57 fouls (35 against Memphis) and sending the Vols to the foul line for 46 shots (they made 39). The Tigers hit 16 of 22 from the charity stripe, yielding 23 points to UT when the clock was not running. "You just gotta play [better] defense, and stop fouling," said Tiger senior Mike Parks, limited to 18 minutes by foul trouble. "They were more aggressive, the entire game," added Hardaway. "That's why they shot more free throws." 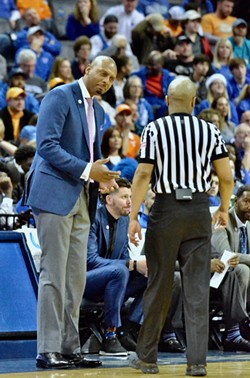 Schofield played more than a supporting role to Williams for Tennessee, scoring 29 points and pulling down 11 rebounds. "You could really feel the passion for both teams," said Schofield. "It was a great stage. The biggest thing was making a statement for our program. I'm proud of how we came in and took care of business. We're gonna get back to work and take our season to the next level. We know we're gonna see every team's best."

The Tigers will travel to Knoxville next season to resume the regional rivalry, and a game has been scheduled in Nashville for the 2020-21 season. Local fans will have to settle for Saturday's loss serving as an early benchmark for growth of the Tiger program, the sting of defeat serving as a motivator for achieving new levels of success, foreign in these parts for too long.

"For this team to sell out this arena, it really shows that everybody is buying in," said Hardaway, who liked his team's fight over the game's 40 minutes and the 92 points it scored against a top-five team. "I'm happy these guys got to be in front of the great fans we have [in Memphis]. Last year was not who we were [as a program]. We're headed in the right direction. We're going to higher places, and we'll be there sooner than later."