After a pregame boost from an actual member of that 1985 Final Four team (Dwight Boyd, the team's director of player personnel: "You gotta represent. This is Memphis State."), the Tigers roared as thoroughly as they have in Penny Hardaway's rookie season as head coach. After taking a 13-0 lead over the game's first seven minutes, the Tigers only made life more uncomfortable for the SMU Mustangs. Senior guard Kareem Brewton Jr. set a career high for three-pointers (5) before halftime. (Brewton's initial reaction to the throwback jerseys: "These are too cold.") 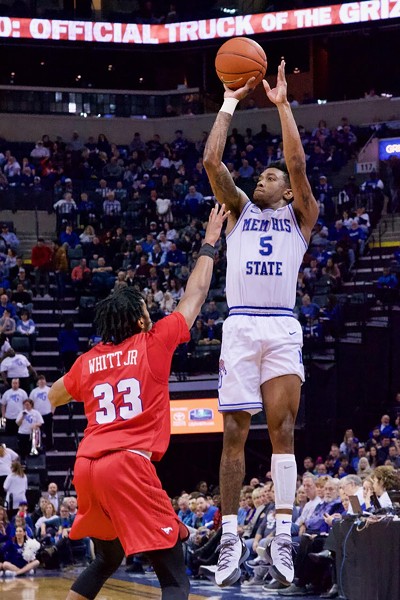 By the time Kyvon Davenport threw down a dunk midway through the second half — the resulting electricity seemed to make the 1985 NCAA tournament banner shimmer — the Tigers had almost doubled SMU (59-32) on the scoreboard. A crowd of 16,673 relished the rest of the contest as Memphis improved to 12-6 for the season and 4-1 in the American Athletic Conference.

"We had a full week to prepare for this team, and we left no stone unturned," said Hardaway. "I couldn't be more proud of the guys. The energy was crazy from the beginning. We're starting to believe in what we're doing. As a team, as a family. This is exactly what I've been looking for when it comes to punching first. We have them prepared for every scenario, so there's no excuse, except for the energy."

"Coach put up a 'hustle board,'" noted Brewton, "for counting charges, rebounds, getting loose balls. We came out with energy. And we were running; that's what we do best." Brewton hit six of his 11 attempts from three-point range and finished with a game-high 20 points in his third consecutive start.

"I met with Nike at the Final Four last year and really begged for the Memphis State uniforms," said Hardaway. "The uniforms are great, but the play was even better. They reminded me of my old uniforms. I didn't think they'd respond the way they did. They went crazy; it gave them some extra energy."

The Tigers held SMU to 36-percent shooting from the field. They forced 21 turnovers (and only committed 12). The Mustangs' top scorer, Jahmal McMurray, was held to six points, a dozen under his season average. McMurray was 0-for-8 from three-point range. SMU drops to 11-7 (3-3 in the AAC).

Hardaway emphasized the value Brewton is bringing, drawing a contrast between the player he is now with his play as a junior last season. "Last year's team felt it was entitled to come in and get minutes," said the coach. "We had some disappointed guys early [this season], because they weren't getting minutes. Kareem was one of those guys. To see this process, [Kareem] working hard, buying in, and getting rewarded for it . . . I love that. That's what life is all about. When you earn it, it's better. He's working his butt off."

The Tigers remain one of five teams in the AAC with only one league loss. Their next game will be on the road Thursday against another of those teams, Temple (14-4, 4-1).

NOTE: Through 18 games, the Tigers have scored a total of 743 points before halftime and 743 points after the break.