August 31, 2019
3 comments
A punt and a safety. Few football games are decided by either. In their 2019 season-opener Saturday at the Liberty Bowl, the Memphis Tigers beat Ole Miss with both plays proving critical.

Clinging to a 13-10 lead midway through the fourth quarter, the Tiger offense stalled near midfield. Sophomore punter Adam Williams proceeded to drop the ball inside the Ole Miss 20, with a wobbly roll to the Rebel two-yard line. On the next play from scrimmage, senior defensive end Bryce Huff stormed around the right edge of the Rebel offensive line for a sack of quarterback Matt Corral. The end-zone tackle and two points it delivered proved enough for Memphis to win its sixth straight season-opening game, a program record.

"Thank you, Tiger Nation, for the energy you brought into that stadium," said Memphis coach Mike Norvell in opening his postgame press conference. "We knew there was going to be a lot of emotion. Thank you for showing up this morning for the Tiger walk. That was an exciting atmosphere. We said all week, whatever it takes to be one point better. Hats off to our defensive staff, Coach [Adam] Fuller. Kept them off balance all game long. Whoever could establish the running game would be successful. We ran for 192 yards; they ran for 80. And to end the game with a six-minute drive . . . that's something I'll remember a long, long time."

The Tigers opened the game’s scoring on their second drive, junior quarterback Brady White carrying the ball in for the final yard with 5:23 to play in the first quarter. The teams traded blows without scoring again until Tiger senior running back Patrick Taylor completed a 37-yard drive with his 35th career touchdown in the final minute before halftime. Pop Williams set up the short drive with a 21-yard punt return.(Kicker Riley Patterson hit the right upright on the point-after attempt.)

The Rebels got on the scoreboard via field goal late in the third quarter, kicker Luke Logan converting from 35 yards. A pass-interference call against Tiger cornerback T.J. Carter helped Ole Miss score its lone touchdown, a one-yard carry by Scottie Phillips with 11:49 left to play that reduced the Memphis lead to 13-10. The ensuing Tiger possession concluded with the Williams punt that set up Huff's safety.

"There were some mistakes we need to clean up," acknowledged Norvell. "Ten penalties, some mistakes on third down [offensively]. All in all, it was a great team win. This was a showcase game."

The Tiger defense allowed its fewest points in more than two years, dating back to November 2016. Ole Miss converted only one third down in ten attempts. (The Rebels were one for two on fourth down.) Joseph Dorceus and La'Andre Thomas each picked up sacks in addition to Huff's. And when Thomas was ejected for a targeting penalty late in the first quarter, freshman Quindell Johnson stepped in and grabbed the first interception of his college career. 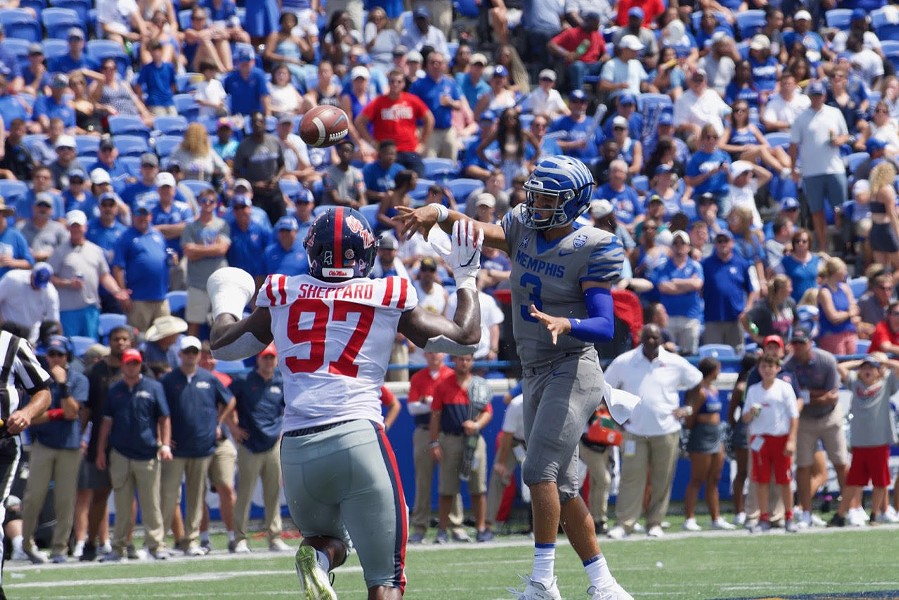 On the offensive side, Memphis played its first game since Darrell Henderson and Tony Pollard were drafted by NFL teams, but a new playmaker seems to have emerged in the form of freshman tailback Kenneth Gainwell. A native of Yazoo City, Mississippi, Gainwell lived up to his name with 77 yards rushing and 41 receiving (on six catches). He earned three critical first downs on that game-ending drive including a shovel pass taken on fourth-and-two from White near midfield with just under three minutes left on the clock.

"Those [fourth-down] decisions, you gotta be willing to make," said Norvell. "I believe in our players. We wanted to have an aggressive mindset. I felt good about going out to win the game, and not just hold on. I had confidence that if something bad happened, we would do what was necessary [to win]."

"I was confident," said White when asked about the fourth-down shovel pass to Gainwell. "There are certain situations when we'd typically run it, so I was out there, waiting for it. I went through my pre-snap read, saw we had a good look. It's a unit effort." White completed 23 of 31 passes for 172 yards and tossed an interception early in the second half.

"We're 1-0," emphasized White. "It makes us super-confident, to win a game like that. Kudos to the defense, the offensive line. It took multiple guys to step in, a grinding effort. I'm blessed to be here."

Taylor finished the contest with 128 yards rushing, enough to vault him past Tiger legend Dave Casinelli and into third place on the Memphis career chart. But for a team that allowed more than 30 points per game a year ago, Saturday's win — over a team from the mighty SEC — will be remembered for what could be a corner turned by the Tiger defense.

"Coach Fuller brought some energy to the sideline today," said Huff. "He was on the sideline, smiling. We were only up three. It was great energy. We have so much to correct. Even though we played well, there's a lot we can improve on. I know our coaches are going to push us to get better."

The Tigers return to the Liberty Bowl next Saturday to host Southern. Kickoff is scheduled for 11 a.m.