That sentence — or a version of it — could have opened a game report no more than twice since World War II until the Tigers beat Navy Thursday night at the Liberty Bowl. Only Spook Murphy's 1961 squad (which started 6-0) and Justin Fuente's last Memphis team in 2015 (which started 8-0) have gone as deeply into a season unblemished as the 2019 Tigers. With a third of the regular season behind them, the Tigers won their American Athletic Conference opener in a matchup of teams aspiring to win the league's West Division. (Navy falls to 2-1 overall and 1-1 in the AAC after the loss.)

"That was a program-defining game," said Memphis coach Mike Norvell after securing the 30th win of his four-year career. "Navy does things the right way. To come out, and not play our best in the first half, and see our guys respond, to continue believing in each other, to finish the game . . . the response of our quarterback [Brady White] was remarkable. All three phases of the game, that's what you have to see. Our kids would not be denied. It speaks volumes to where we are. We're looking for our complete game; we're still in the process."

After falling behind 20-7 midway through the second quarter, the Tigers roared back, starting with a 99-yard kickoff return for a touchdown by junior Gabriel Rogers (one of three Memphis touchdowns in the game that covered more than 70 yards). The scoring play, coupled with a 75-yard jaunt by Kenneth Gainwell on the Tigers' first snap from scrimmage contributed, ironically, to Navy dominating the first half. The Midshipmen ran 50 plays (to the Tigers' 15) and held the ball for 22:52 over the game's first 30 minutes.

After each team punted on its first possession of the second half, the Tigers took the lead (21-20) with a 50-yard drive that culminated in a 5-yard touchdown pass from White to Kedarian Jones. White connected on scoring tosses on each of the next two Memphis possessions, first to Antonio Gibson in stride for 73 yards and then to Damonte Coxie on a catch-and-run that covered 31 yards and extended the lead to 12 points (35-23) with 11:27 left in the game.

After allowing 292 yards in the first half, the Memphis defense only surrendered 81 after halftime, closing gaps that had been exposed by Navy quarterback Malcolm Perry (91 rushing yards and two touchdowns on the ground) early in the game. Sophomore safety Sanchez Blake pulled down an interception in the fourth quarter that sealed the win and may get Memphis back into the Top 25 for the first time since the end of the 2017 season.

"Sometimes when you have that much emotion — when you know you're on a national [TV] stage — you try and do too much," said Norvell. "There were moments in the first half when we weren't playing under control. We had to slow it down, trust the training, trust the game plan. There was no panic. It was all about that next play."

"There was no flinch on our team," emphasized White, who completed 14 of 18 passes for 196 yards (all but 29 of them after halftime). "I don't care [about the booing]. I think it affects my parents more than it does me."

"That kid is a special kid," said Norvell about his quarterback. "Tremendous preparation. He was able to control himself; that's the mark of a great football player. We're gonna make mistakes. But you play 60 minutes. He showed the heart he has, and the champion that he's working to become." 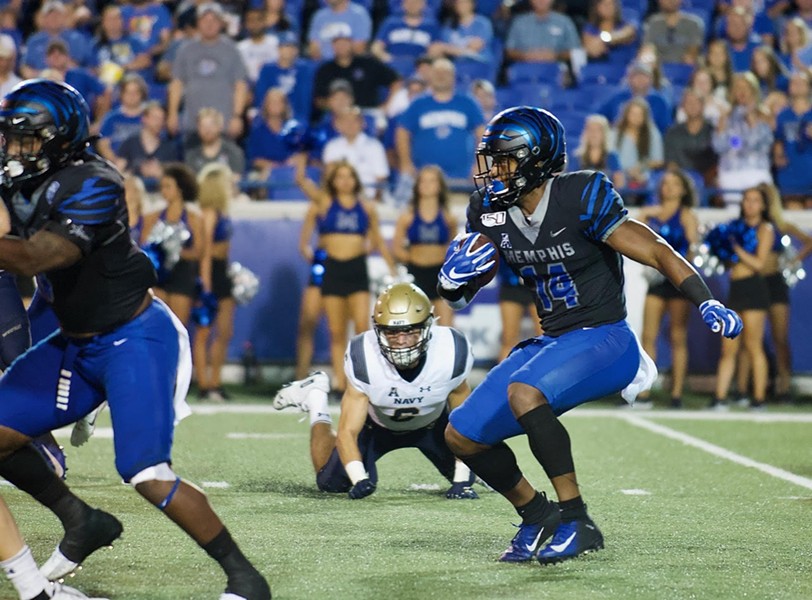 Gibson had only caught three passes (two of them for touchdowns) over the Tigers' first three games before hauling in the 73-yarder late in the third quarter that gave his team a 28-20 lead. "Coach [Norvell] told us we'd get one-on-one matchups," he said. "And we had to win them. I got one. I didn't have to do much; he put [the ball] right in my arms."

Gainwell finished the game with 104 rushing yards, just above his AAC-leading average. Gibson's three catches were good for 105 yards.

With three of their next four games on the road — starting on October 5th at Louisiana-Monroe — the Tigers are less interested in being 4-0 than in going 1-0 again . . . and again.

In a rush to hop on a bus back to campus, Blake summarized the mindset of his undefeated team: "We're close. We're brothers. We hold each other accountable. You're playing for the guys to your left and right."