October 12, 2019
2 comments
The 23rd-ranked Memphis Tigers dug themselves into a 0-16 hole early, after shooting themselves in the foot with turnovers. It proved to be a deficit they were unable to overcome in a 30-28 loss to Temple in Philadelphia, Saturday. 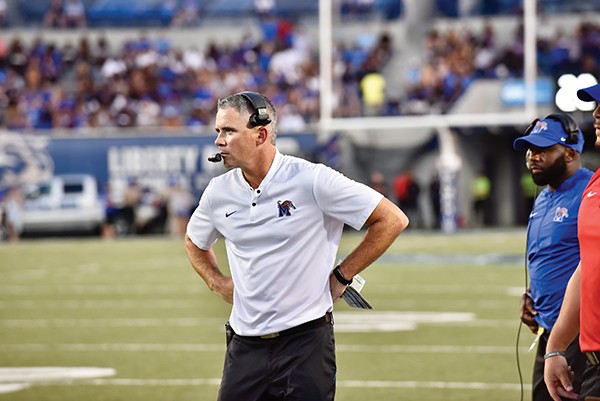 Three early turnovers, including an interception and a fumble by Memphis quarterback Brady White, gave Temple field position, and the Owls capitalized for nine points. At the end of the first quarter, Temple led 13-0, stretching the lead to 16 before Memphis got on the board with a touchdown. Temple led 23-14 at the half. The Tigers had four turnovers for the game.

Memphis made a charge in the second half, holding the Owls to seven points and scoring 14, as White found his range, passing for a career-high 363 yards. With less than two minutes left, down 30-28, Memphis was driving into position for a possible game-winning field goal. On a fourth-and-10, White threw what was ruled on the field as a first-down pass to tight end Joey Magnifico at the Temple 30 yard line. Unfortunately, after a review of the play, officials ruled the pass incomplete, saying that Magnifico had juggled the ball and lost possession as he hit the ground.

Temple was able to run out the clock to seal the win. The loss put both the Tigers and Temple at 5-1 on the season.

Memphis takes on Tulane at the Liberty Bowl next Saturday.

Memphis loses to Temple 30-28 robbed by the refs?