November 04, 2019
1 comment
• Best morning in the history of Memphis sports.
The party Memphis threw for ESPN's College GameDay crew as the sun rose over Beale Street Saturday morning is one helluva metaphor. Both for local sports fandom and the larger Memphis community. The images broadcast nationally via the overhead cameras (and Goodyear Blimp) made the throng of Tiger fans look like a blue-clad force of nature. And it was entirely about the crowd. This was the inverse of typical sporting events: Stars attended to be near the fans. Penny Hardaway, Jarren Jackson, Ja Morant, Jerry Lawler, and even U of M football coach Mike Norvell himself (the one man most responsible for the event) made appearances, but the "star" was that crowd. However clever the signs may have been — and they were plenty clever, even Lee Corso with a grill — the message was larger, and on a scale I'm not convinced any Memphis team has achieved before. We are Memphis football, and we are extraordinary. 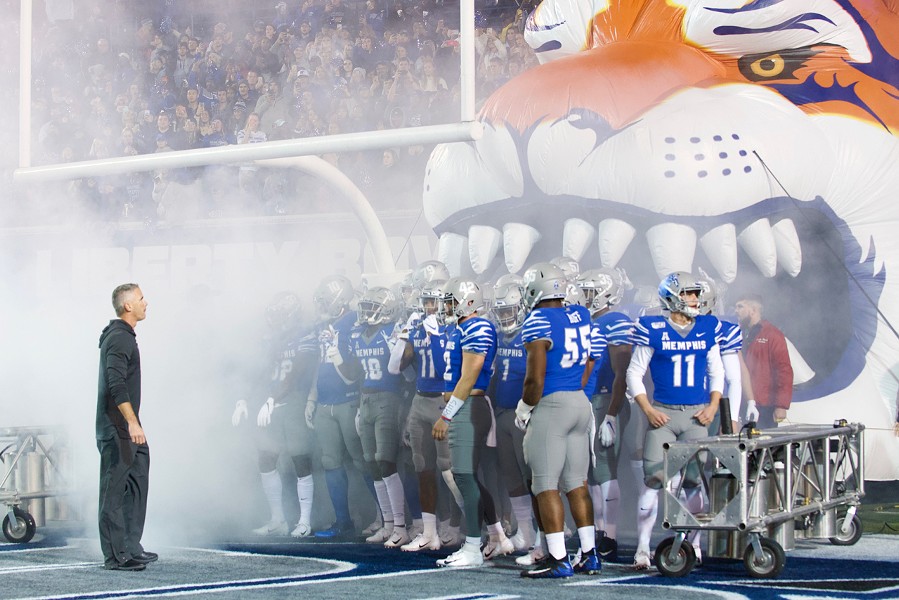 Based on comments from Rece Davis, Desmond Howard, and Kirk Herbstreit — both during the broadcast and via social media — ESPN was thoroughly impressed with the Memphis delivery. During his press conference after Saturday night's win, Norvell said, "We'll invite them back next year." And that's the beautiful twist: The biggest traveling show in college football may well be back in the near future, guests in a football city few would recognize a generation ago.

• "This system is designed for playmakers."
Norvell has been saying a version of this since he took over the Tiger program before the 2016 season. Patrick Taylor missed his eighth straight game Saturday night. His sublime replacement, Kenneth Gainwell, failed to top 100 yards rushing for the first time in two months. So onto the brightest of stages steps senior wide receiver Antonio Gibson. The senior scored touchdowns on a 50-yard reception, a 97-yard kickoff return (to open the second half), and a 78-yard run on his way to setting a new Tiger record with 386 all-purpose yards. Gibson, mind you, had 99 all-purpose yards for the entire 2018 season. If College GameDay was a three-hour infomercial for Memphis football and its arrival, the win Saturday night will be an invaluable recruiting tool for Norvell and his staff. Two years after suiting up for East Central Community College in Decatur, Mississippi, Antonio Gibson was the best college football player in the country on the biggest night in Memphis football history. He was, indeed, a playmaker.

• I saw a man flip-tackled by his facemask without a penalty called.
It turns out the strongest part of Gainwell's body isn't his legs or arms, but his neck. When SMU linebacker Richard McBryde took him down like a rodeo steer in the second half, he did so directly in front of referee Adam Savoie, yet no flag was thrown. What if Gainwell hadn't jumped to his feet? Just as egregious, a second-half SMU punt was almost downed inside the Tiger five-yard line, but caromed off the hand of a Mustang player into the end zone for a touchback . . . until officials ruled the player had "control" of the ball at the two-yard line. What if the Tigers hadn't responded with a 98-yard touchdown drive?

These two face-plants by the American Athletic Conference officiating crew went against the team that won the game, so there's an inclination to forget and forgive. But consider how close Saturday's game was. Consider the stakes: at least a berth in the AAC championship game, and perhaps a berth in a New Year's Six bowl game. On an otherwise glorious night for his league — in front of a national audience in prime time — AAC commissioner Mike Aresco witnessed an embarrassing display of officiating. This was not a crew allergic to yellow laundry. A total of 27 penalties were assessed in the game. If a defensive back so much as looked at an intended receiver, pass interference was likely. Yet (at least) two major calls were missed. Savoie's crew should be penalized, with no assignment the remainder of the season for a game that could impact the AAC championship. The Tigers overcame two opponents in front of those ABC cameras. If the AAC wants to be "Power 6," games must be decided strictly by the players.