November 26, 2019
1 comment
Has the University of Memphis ever hosted a bigger Senior Day at the Liberty Bowl? A quick summary of what's at stake for the home team in Friday's nationally televised contest between the 17th-ranked Tigers (10-1) and the 18th-ranked Cincinnati Bearcats (10-1):

1) The American Athletic Conference's West Division title, which would mean . . .
2) The AAC Championship game at the Liberty Bowl on December 7th, which could mean . . .
3) A Cotton Bowl berth for Memphis should the Tigers win the AAC title (by beating the Bearcats twice in two weeks).

It's a time for deep breaths. Especially for 17 seniors who will be honored before Friday's kickoff. Unless they redshirted for the 2015 season, this class has only known coach Mike Norvell's way, which has been good enough (so far) for 36 wins in four years.

Make sure you're standing when these eight players are introduced. Whether it's special teams or the scout squad, these Tigers made their impact without fanfare or regular game starts. But their sweat in the weight room and their commitment in the film room was every bit as genuine as those of a four-year starter: Keith Brigham (DL), Joey Bryant (DB), Chris Claybrooks (DB), Colton Cochran (DB, St. Benedict), Desmond Hawkins (DL, Craigmont High), Ladarius Jordan (DB, St. Benedict), Jeremiah Maclin (DL, Southaven), Traveon Samuel (WR/RB).

Kedarian Jones has caught a touchdown pass in each of his four seasons as a Tiger. He's averaged 14.5 yards per catch this season with 465 yards on 32 receptions.

Jonathan Wilson has started at least eight games on the Tiger defensive line all four years. He's accumulated 12 sacks and earned All-Academic recognition after the 2017 season. 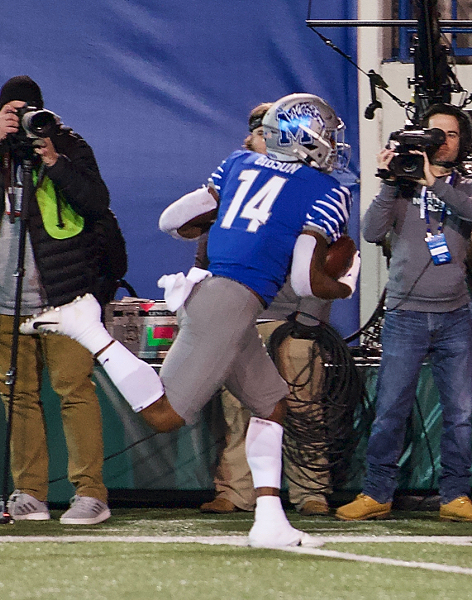 Antonio Gibson had the game of his life on precisely the right night. With ABC broadcasting the Tigers' November 2nd showdown with SMU to a national audience, Gibson set a Tiger record with 386 all-purpose yards to help Memphis earn the win. He scored touchdowns on a 50-yard pass reception, a 97-yard kickoff return, and a 78-yard run from scrimmage. Gibson played only two seasons in blue and gray, but left a mark that will be celebrated for generations.

Much of his senior season has been compromised by injury, but Patrick Taylor will go into the books as an all-time Tiger great. Playing a supporting role to All-American Darrell Henderson in 2018, Taylor rushed for 1,122 yards and scored 18 touchdowns (two of them on receptions). His 2,778 career rushing yards are second only to DeAngelo Williams and his 38 touchdowns are fourth in Memphis history.

Joey Magnifico (St. Benedict) will leave the U of M as the most accomplished tight end in the program's history. He enters the Cincinnati game with 70 career receptions for 1,060 yards and 12 touchdowns. Blessed with NFL size (6'4", 240 lbs.), Magnifico may be catching passes on Sundays a year from now.

Austin Hall (Collierville High School) has been an anchor for the Tiger defense since his redshirt-freshman season when he started 11 games for Mike Norvell's first team. Playing a hybrid linebacker/safety position, Hall has been a disruptor and one of the heaviest tacklers in recent Memphis history. A member of multiple All-Academic teams during his college career, Hall will leave the U of M with a degree in criminal justice.

Bryce Huff didn't become a regular starter (at linebacker) until his junior season, but has impacted games — often in the opponent's backfield — ever since. He moved to defensive end this season and leads Memphis in both sacks (4) and tackles-for-loss (10.5). Like Hall, Huff has earned All-Academic honors from the AAC.

You don't set scoring records without a strong offensive line. And center Dustin Woodard has anchored this year's blocking unit for quarterback Brady White and friends. Woodard started 24 games, primarily at left guard, his first two seasons; moved to right guard (14 starts) as a junior, then took over snapping duties this fall. A two-time AAC All-Academic honoree, Woodard earned all-conference recognition in 2018 and is a candidate this season. Scottie Dill (Briarcrest) took over right-tackle duties this season after three years in a reserve roll. He's seen action in 51 games as a Tiger.