December 21, 2019
1 comment
For the first time in more than five weeks, the Memphis Tigers took the floor for a game that wouldn't be analyzed primarily for who is not playing. A certain star freshman was absent for an eighth straight contest, but we now know James Wiseman is actually no longer a star freshman with the Memphis Tigers. With Wiseman's departure from the program — announced via Instagram Thursday — the Tigers who beat Jackson State Saturday afternoon are largely the players Memphis will ride in hopes of ending a five-year NCAA tournament drought. (The notable exception is Lester Quinones, the guard who missed his fifth game Saturday as he recovers from a broken right hand.) 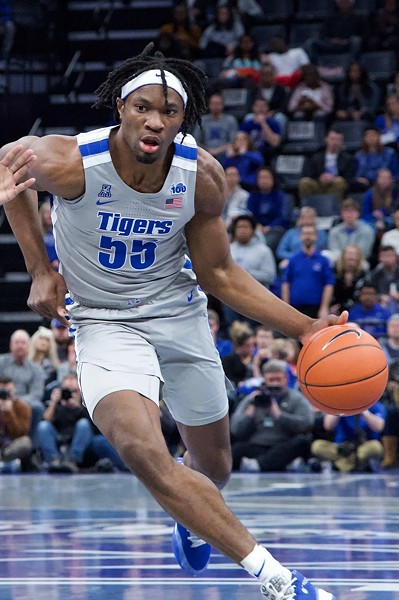 Led by Precious Achiuwa (20 points and nine rebounds in 26 minutes), the 11th-ranked Tigers easily handled JSU for their eighth straight win and improved to 10-1 for the season. It's the best start to a season for Memphis since Derrick Rose and friends won their first 26 games on their way to the 2008 Final Four. The winning streak is the program's longest since an 18-game run in the 2012-13 season (the Tigers' last in Conference USA).

Tiger coach Penny Hardaway acknowledged that the Wiseman saga has been a shock to his system, but isn't all that surprised by his team's record or ranking. "I'm not surprised because of how hard we work," he said following the win. "But it's incredible. This team deserves a lot of credit for everything we've gone through, to be on this winning streak and 10-1."

The Tigers played sloppily in their first home game since December 3rd, committing 18 turnovers before halftime. But they also led throughout the game's forty minutes, putting Jackson State in a 16-point hole (33-17) merely 13 minutes into the game. Isaiah Maurice played like a man wanting to absorb some minutes Wiseman's departure will create. The Tigers' lone senior scored six points, pulled down six rebounds, and blocked four shots in 16 minutes of action. Malcolm Dandridge also appears to be in the mix for more playing time. The freshman is still finding game form after left-knee surgery, but scored seven points and grabbed five rebounds in 19 minutes off the bench.

"It takes a lot of discipline to play the same way against every team," said Achiuwa, acknowledging the Tigers' struggles to protect the ball, particularly in the first half. "We gotta stay locked in, no matter who we play."

"I don't feel we get the respect we deserve," added Jeffries, "but that's good. It means we have something to prove."

Hardaway welcomes another week-long break for his team, a chance to collect some proverbial breath before conference play. (The Tigers host New Orleans on December 28th, then league-rival Tulane visits FedExForum on December 30th.) But he's grateful for the team he now knows is his, and on the cusp of the nation's Top 10. "I'm proud of the team," he emphasized. "It's something we imagined. To be where we are right now, I'm very proud of that. Just to get [another] win is a blessing."