January 04, 2020
comment
The Memphis Tigers have learned to play without departed star James Wiseman. Saturday afternoon at FedExForum, they learned just before tip-off that they'd need to play without D.J. Jeffries . . . for at least 40 minutes. With their second-leading scorer on the bench with flu symptoms, the Tigers fell to Georgia, ending a 10-game winning streak and ceding the stage — for at least one day — to a star freshman in another uniform, Georgia's Anthony Edwards. The player right behind (or just ahead of) Wiseman in most rankings of the 2019 recruiting class, Edwards missed 13 of his 17 shots from the field (guarded primarily by Lester Quinones and Alex Lomax), but hit a pair of key three-pointers in the second half to help the Bulldogs erase an eight-point deficit and earn their first win over a Top-10 opponent since 2011. 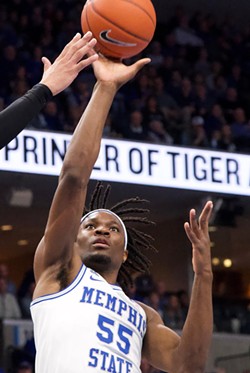 "Tough game today," said Memphis coach Penny Hardaway after his team's first loss since November 12th. "We had a couple of chances to knock them out, and didn't do it. When you let a team hang around, this is what can happen. We have to regroup."

The game featured 20 lead changes and 10 ties (including a 37-37 score at halftime). The Tigers led, 61-59, courtesy of a Precious Achiuwa three-pointer with 4:30 left to play in the game, but didn't connect on another field-goal attempt. Bulldog forward Rayshaun Hammonds followed Achiuwa's shot with a trey of his own to regain the lead for Georgia, one it wouldn't relinquish. Sahvir Wheeler hit a jumper from the free-throw line that extended the lead to three points (64-61) with a minute to play. Down two (64-62), Quinones had a clean look from beyond the three-point line in the right corner, but missed with 11 seconds left on the clock.

"It's just experience,"  said Lomax. "We're kinda young, haven't been in this situation. We can learn from it, and know what to do next time. For me personally, I gotta find a way to get the ball to Precious, get him going."

"It's following the game plan," emphasized Achiuwa. "Not seven out of ten times, but every single time. The last four minutes, we kind of lost focus. I think this is a good learning experience. You gotta move on."

Minus Jeffries (averaging 12.0 points and 4.7 rebounds per game), the Tigers needed a "next-man-up" performance and didn't get it. Quinones started in place of Jeffries but made only three of nine shots (one for five from three-point range). Boogie Ellis and Damion Baugh combined to miss 12 of their 17 shots, and Tyler Harris missed all four of his attempts from long range. Holding to form was Achiuwa, who led the team with 20 points and 15 rebounds. Lomax added 11 points, four assists, and five steals (two late in the game, guarding Edwards).

Hammonds led Georgia (10-3) with 15 points and Edwards scored 13 in the first contest between these programs since December 1996, when Larry Finch coached Memphis and Tubby Smith the Bulldogs. It's the first loss this season at FedExForum for the Tigers (now 9-1 at home).

Hardaway acknowledged Jeffries's absence was a factor, but wasn't ready to make it the explanation for the loss. "Players get sick, and it changes a lot for us," he said. "Everybody knew that, and we had to adjust. I did a poor job of playing five or six players a lot of minutes. Precious got tired. Damion got tired. We gotta regroup. You gotta trust the rotation, but it just didn't look good to me [today] with certain guys out there on the floor. We had energy. We just didn't execute properly. It was uncertainty, and not making the right plays."

Having completed their non-conference schedule, the Tigers (12-2) hit the road for their next two games, first at Wichita State on Thursday. The Shockers (11-1) are currently ranked 24th in the AP poll.