U of M students star at The Bluff

Guests partied to the beat of the music of University of Memphis performers at the Hear 901 Music Festival, held April 28 at The Bluff.

“Hear 901 is our annual spring festival where we provide an opportunity for students in the music industry division to perform original music while also creating opportunities for students to produce, promote and publicize a festival,” said Ben Yonas, assistant professor of music business at the Rudi Scheidt School of Music at U of M. “We do these every semester. Our Fall festival we usually do at the Levitt Shell. This was the first time we had a show at The Bluff. It exceeded all expectations. Just under 500 people in attendance. It was a smash success. The place was packed.”

The festival also marked the release of Aaron’s new EP, “Caught in the Corner of a Half Moon.” Aaron, one of the artists on the school’s Blue Tom record label, said, “This EP is kind of a story of me letting go of things I was attached to in the past and coming into a new self identity. There are lots of themes of letting go of toxic things I maybe once held onto, but things that clouded my vision of myself. These songs tell that story of starting to value new things in life and letting those things shape me.”

The Band CAMINO, which headlined the event, played several songs from its “My Thoughts on You” EP as well as songs from its upcoming EP, “Heaven,” which will be released June 2.

All marketing and production for Hear 901 was done by U of M students.

A 6-by-4-foot oil portrait of a distinguished- looking gentleman - the late Domenico Canale - graces The Toasting Room at the Old Dominic Distillery. Domenico, great-great-grandfather of owner Alex Canale, wears a suit and vest with a watch fob. In his left hand he carries a toddy glass. In his right arm he carries a rooster.

That’s a Dominicker rooster, Alex said. The portrait was taken from a small headshot of Domenico. No photo - to Alex’s knowledge - exists of his great-great grandfather carrying a rooster. The bird was added later. Red Deluxe created the concept and commissioned artist David Riley to paint the portrait, said the Red Deluxe associate creative director Ben Powers.

“On one of the original Old Dominic bottles we unearthed to create that product were two roosters,” Alex said. “We invested some money in timberland. We were having our own white oak timber cut for barrels. One of the timber guys picked up the old bottle and said, ‘That’s a Dominicker rooster.’ So, we did some research and it is an actual Dominicker breed of rooster.”

The breed, he said, “is known for being hearty, calm, steady and a great forager. So, it sort of goes hand in hand with Dominic himself and the company as it’s evolved over the past 150 years.”

Guests milled about the portrait as they tasted Memphis vodka, Honeybell vodka and The Memphis Toddy at one of the distillery’s soft openings, held Aug. 28 during Trolley Night Memphis. A total of 324 tastings - at $2 for the trio - were sold that night, Alex said.

Atop the building, the striking neon sign bearing the Dominicker rooster resembles a turn of the 19th-Century logo, but it’s brand new, Alex said. “We modernized that logo,” he said. “That’s how we wanted it to look: like we’ve been here for 150 years. Even if we haven’t been in that building.”

Mary Ellen Kelley exhibited her photos and mixed media art and she was on site to sign copies of her book of photos, “My Memphis View,” Aug. 28 during Trolley Night Memphis at Stock & Belle on South Main.

She described the book of 65 photos of Memphis as “a modern way to look at Memphis. Memphis doesn’t have anything like the book I have. The books we have are coffee table books. They’re a little bit stagnant. I hate to say ‘old fashioned.’ But my book is simple and it’s hip and it’s small. To me, it’s much more relevant to a younger generation - people coming into Memphis and people who’ve been here looking at Memphis in a different way.

“My style is minimal. It focuses on one thing. So many of our photographic books representing Memphis are ‘whole view.’ They show the whole moment. Mine is simple, whitespace oriented.”

Mary Ellen photographs “every day things,” but, she said, “I focus on one particular detail.”

One of her photographs is of the Memphis Pyramid, now the location for Bass Pro Shops at the Pyramid. “It’s a picture of the Pyramid, but the top third. Against a white background.”

She also took a photo of the Pyramid from the ground looking up. Looking up, keeping your chin up, bucking up and looking forward to things are important to her, Mary Ellen said. “Looking up is a bit of my mantra.”

Her show will be on view through May.


Carnival Memphis will kick off its “Carnival Week” of parties at night and charitable visits during the day with the Crown & Sceptre Ball, which will be held June 2 the Hilton Memphis.

The legendary Memphis celebration, which began as Cotton Carnival in 1931, continues with various events during the year, including the Business and Industry Salute and Krewes for Kids, which is Carnival’s biggest fundraiser for its Children’s Charity Initiative. Each year, Carnival selects three local charities that provide services for children. This year’s recipients are Church Health, The Erika Center at Bodine School and Knowledge Quest.

The Secret Order of Boll Weevils, a group of people who conceal their identities by wearing masks with long snouts, held its annual Boll Weevil Party April 28 at Riverfront bar and Grill. The Weevils, which formed in 1966, are merrymakers at the parties as well as the charitable events.

Van Raby was introduced as this year’s ‘Unmasked Weevil.” That means he doesn’t have to wear a snout any longer. Instead, Van showed up wearing a green jacket, green shorts, green shoes and pink- and orange socks.

Krewes for Kids was held April 22 at the Crosstown Concourse. The party drew “the most people and was the most successful fundraiser in the history of Carnival,” said Carnival Memphis executive director Ed Galfsky.

The party featured food from area restaurants, music by AJ Ghent Band and silent dancing to music heard with headphones at Silent Events 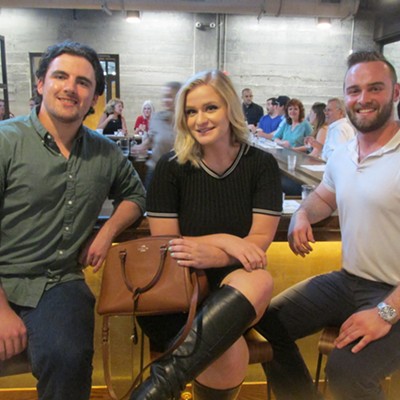 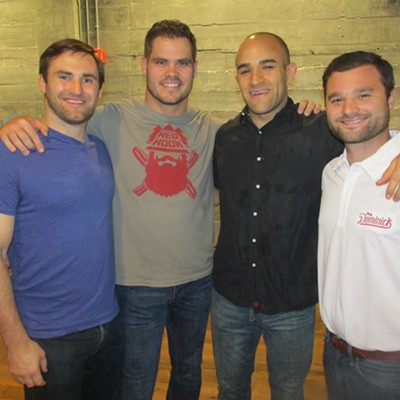