“A lot of people weren’t on their phones during the show,” she said. “Everyone was paying attention to the bands.”

The event, held May 20 at the Hi Tone, featured 10 bands and NYA, a woman deejay.

A total of 298 people paid to get in, but about 350 attended, Allison said. That included the bands and “people that snuck in and that were on the guest list,” she said.

Allison got the idea to do the show two years ago. “I heard Knots for the first time and fell in love with them - their music, everything about them. I wondered if there could be something in Memphis. Get a bunch of bands together to play for a good cause and give recognition to women that are making really, really good music in town.”

Finding bands that included women was “very easy,” she said.

Knots headlined the show, which raised $2,115 after production costs.

GRRL FEST lasted until the wee hours. “People were still there at 3 a.m.,” Allison said. “It was kind of hard to get people out.”

Louise Page, one of the performers, said, “I thought it was a really really great idea. I think there are a lot of industries in which the role women play are marginalized, harder for women to break in the industry. Women don’t always get the same recognition in the music industry. And to have an event that acknowledges that with great female musicians is awesome. And necessary.” 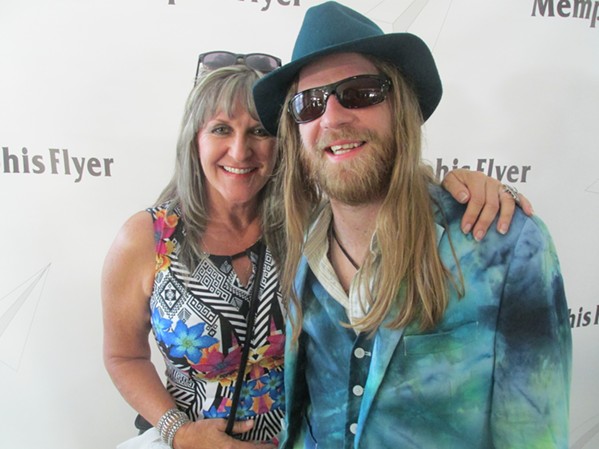 Matt Isbell’s three-piece tie dyed suit lit up the Peabody Rooftop Party, held May 18 on the Plantation Roof and inside the Skyway.

The white suit, in shades of green and blue, made its debut at the party, said Matt, lead singer of Ghost Town Blues Band, which performed at the weekly event.

“I’d just gotten it that day so I was excited to wear it,” Matt said. “Take it for a test drive.”

He got the suit idea after he saw a jumpsuit worn by blues vocalist/harmonica player John Nemeth. Matt originally told John about Kate Lynn Stout, who does tie dyes at her Psychedelic Sass store in Arkansas. John commissioned Kate to do the jumpsuit. Now, Matt said, “He’s got this cool looking jumpsuit with the ace of ace of spades tie dyed on the back. I just thought it was too cool. I was like, ‘Well, I need to answer this.’”

Matt went on line and ordered a white linen suit, which Kate tie dyed. Comparing his suit to John’s jumpsuit, Matt said, “This is my ‘Their Satanic Majesties Request’ to his ‘Sgt. Pepper’s Lonely Hearts Club Band.’”

Matt and the rest of the Ghost Town Blues Band, which includes Preston McEwen, Matthew Karner, Suave Jones, Taylor Orr and Tim Stanek, will be in Las Vegas as well as in New Mexico and Arizona this weekend. Asked if he was going to wear the tie-dyed suit, Matt said, “I don’t know. It’s going to be one of those things where I’ll have to catch the vibe of the festival before I pop it on. It’s not going to be my uniform. It’s going to live in the van. When it’s time to wear it, I’ll know.”

The Memphis Flyer sponsored the May 18 event.

The Memphis in May World’s Championship Barbecue Cooking Contest could be considered one big birthday party for Kert Kaiser. He was born 23 years ago on the Thursday night of BBQ Fest.

“I’m a barbecue baby,” said Kert, who spent part of his birthday Thursday May 18 with the Cadillac Grillz team at the festival.

His mother, Ashley, and his dad, Edward, have different stories about exactly what happened the night Kert was born. “I don’t remember actually making it down there,” Ashley said. “He swears we were down there and I went into labor. I remember I was on my way. I was half way down there.”

Either way, Kert was born at Baptist Memorial Hospital on Walnut Grove the Thursday night of the festival. And, Ashley said, “For his next 10 years, he thought every time we were at BBQ fest celebrating, he thought it was his birthday party.”

For that first decade of his life, the Kaisers celebrated Kert’s birthday with the rest of the family on Thursday night at the Sons of Bacchus booth at the festival. They served cake made in the shape of a pig, Ashley said. But Thursday night also was the festival’s kids’ night so people dressed up like Batman and other characters were featured along with games. All of which Kert thought strictly were for his benefit.

“We’ve got great pictures of them sucking on bones before they should have been eating ribs,” Ashley said.