Carrier, the chef/owner of the restaurant, featured items from the original menu served by women in beehive hairdos, which was part of the look when the restaurant opened in 2002.

The Wild Magnolias performed in concert as well as in a second line on Cooper.


Asked how she thought the weekend went, Carrier said, “Oh, my God. It was fantastic. A dream come true.”


Bringing those original menu items back was hard work, Carrier said. “Most of the people in the kitchen now, they didn’t know that menu. So, it was like teaching them everything.”


The servers were given appointments to get their hair done by “this woman who does retro hair,” Carrier said. “She did them every 45 minutes. Everyone played the part.”


She described the event as “a family reunion of the restaurant world. So many patrons came out to help us celebrate. And that meant the world to me.”


Carrier said she’d run back and forth from the kitchen, where she was working, to the floor to talk to customers. 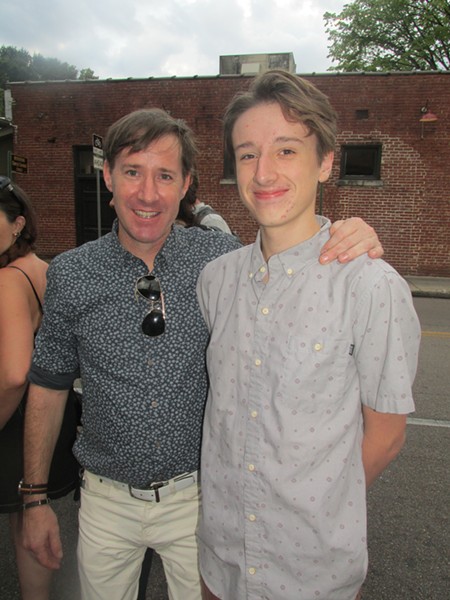 
Shaggy, who began his professional career at the old En Teur restaurant in Memphis, now is executive chef at Rosedale Restaurant, one of Susan Spicer’s restaurants in New Orleans. The restaurant is housed in an old police station on Rosedale Drive. “What I’m doing in New Orleans now is more of an old New Orleans cuisine. That kind of got lost in the shuffle. For instance, right now I’m doing brined catfish and dirty rice, chow chow and smothered greens. We pride ourselves on my recipe for dirty rice.”


And, he said, “We have the best turtle soup in town.”


Shaggy moved from New Orleans to Memphis in the late 1990s. He worked for several of Carrier’s restaurants, including Automatic Slim’s, which she later sold, the old Do Sushi and Beauty Shop.

His first Memphis restaurant job was working at the Arcade Cafe. “Jack Oblivian and I delivered pizzas for the Arcade,” he said.

Shaggy eventually got in Arcade’s kitchen. “I started cooking there. That’s when I fell in love with it, man.”

Dog lovers spent Sache Sunday on a water slide, listening to the Grape band and playing with canines at The Street Dog Foundation fundraiser next to Sache clothing store/salon on South Main. Owner Eric “Sache” Evans and his wife, Rachel, hosted the event July 16 for the foundation.

Street Dog’s mission is to get dogs off the street - rescue, rehabilitate and re-home them.


Sache Sundays will be held monthly through September, Evans said. “As a member of this community, I wanted to throw back and say, ‘Thank you.’ Each month we do it to support a different charity.”


Streetdog Foundation was chosen because “animals are near and dear to our hearts.”


For June’s Sache Sunday, a total of 223 pounds of canned goods as well as cash donations were given to the Mid-South Food Bank, Evans said.


Josh McLane and Brennan Whalen, who comprise HEELS, celebrated the release of the band’s new EP, “The Long Con,” July 16 at the Hi-Tone.


“‘It’s all about the big picture,” McLane said. “This new record is four songs that we already released in a different way on the other two records. They’re electric now - better, re-written and full. The idea of a long con? It’s a con. We’re getting you to buy a record we’ve already made. It’s a remix album to be perfectly honest. But it’s almost like a reboot of what you’ve already heard. For lack of a better term.

“That being said, it’s the best thing we’ve put out. Hands down.”


The record was produced by Alyssa Moore at her Move the Air studio in Midtown. “We were the first people she let back in the door to record a record at Move the Air.”


The EP, he said, is “the closest to us sounding live we’ve heard without it being a live record.”

What do you call a barbecue sandwich served at Dixon Gallery and Gardens at Park and Cherry?


That’s not a joke. That’s the name of one of the sandwiches served at Park + Cherry, the restaurant in Dixon’s gift shop.


Kevin, owner of CFY catering and The Atrium at Overton Square, took over the Dixon restaurant. “They started it, I guess, a year ago with Wally Joe and then we basically reopened it,” Kevin said. “We kept the same name, but it’s essentially a new restaurant in an old space.”
Asked what direction they wanted to go in with the food, Kevin said, “The biggest inspiration for the food we’ll be doing there is ‘fresh.’ We’re going to utilize the gardens for ingredients. So, they’re going to start growing fresh herbs and other edibles we can utilize throughout the menu. They’ve got some herbs for us to utilize, but they’re going to start growing especially for us. We’ll be working alongside the gardeners in growing what we want to grow.”