Ann Sanchez attended her first Blues on the Bluff event July 22nd on the grounds of the National Ornamental Museum. The annual event is a fundraiser for WEVL FM 89.9, a member-supported radio station.


“I came to Memphis for the blues,“ Sanchez said. “I moved from San Franciso, bought a house and I’ll stay forever.”

And, she said, “I’m a down home blues girl. I was raised with the blues.”


Asked what she thought about the event, Sanchez said, “It was wonderful. I had a great time. I’m going every year. And I became a (WEVL) member that evening. And I received a wonderful poster.


“I just love the music and history in Memphis. I just love Memphis.”


Terry Soffel, who was with her, is a Memphis drummer who performed for about 20 years with Joyce Cobb.


Ghost Town Blues Band and Marcella and Her Lovers were two new bands at the event. Also performing were The MD’s (formerly Maitre D’s.”


The sunset, again, was a star. “One man told us, ‘It was worth coming just for that,’” Dorsey said. 
“The novel traces one life-altering summer for 13-year-old Trey Milligan, a boy spending three months away from home with his widowed grandmother in East Tennessee,” said Murtaugh, Memphis magazine managing editor. “Three special friends come to embody love, death and the criminal element as Trey finds himself growing up faster than he’d like. The story calls to mind coming-of-age films like ‘Stand by me’ or ‘The Sandlot,’ one set in the 1980s and with a love story.“


“Why did you choose this genre,” a guest asked Murtaugh.

Murtaugh has “fond memories” from his own childhood summers. “Like Trey, in Cleveland, Tenn.,” he said. “And there are some special people from that time in my life who are no longer with us. The book became a way I could bring these characters to life, even if dramatized, and share their wisdom and virtues with readers.”


“Trey’s Company,” published by Sartoris Literary Group (Jackson, Miss.), sells for $19.95 paperback and $8.95 eBook and is available at Amazon.com and Burke’s Book Store.


Guests experienced Luna Restaurant’s “new look, new image” at a dinner July 17 at the Hotel Napoleon, a boutique hotel at Third and Madison.


“We’re trying to make Luna a beacon Downtown, said Eric “Sache” Evans, a consultant on the project. “A restaurant that has a Southern fusion-inspired menu. And try to appeal to the Downtown community, the major businesses around there, including ServiceMaster, First Tennessee, AutoZone and the Redbirds ”


Eric Hagerman is Luna’s executive chef. “Our goal is to come in and make this place amazing,” Evans said.

Slideshow From Blues on the Bluff sunset to Luna 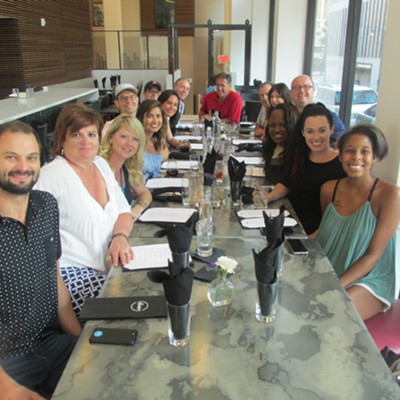