Elvis’s own shoes wouldn’t be too big for Carpenter to fill. “I’m about sure Elvis wore size twelves, too,” said Carpenter, who was dressed in the King’s favorite colors - pink and black.

Carpenter was among the throng at the Candlelight Vigil, held Aug. 15 in front of Graceland. Fans of all ages turned out to honor the memory of the King on a hot summer evening.


Asked what the King meant to him, Australian Elvis tribute artist Stuey V said, “The impact he’s made on many lives.”

Stuey V described Elvis as “a humble human being and one of the greatest entertainers who ever lived.”


Keith Easom, who is from England, showed his love for the King with his tattoos. He had 17 Elvis tattoos on just his back.


Kyler Campbell has a special bond with the King. “I doubled for Elvis once,” he said. He portrayed Elvis - ‘50s shirt, slacks and all - as he sat in the backseat of a green car in the “Sun Records” TV series.

His dressing room door had a star on it and the name “Elvis,” he said.


Brian Troy, who participated in the Images of the King tribute artist contest, said this was his first Candlelight Vigil. “It’s wonderful to be able to finally come here and experience this fantastic thing,” he said.


He enjoyed his visit to Memphis, which included a booking at the Magnuson hotel. As for the Vigil, he said, “This here beats it all.”


“You are keeping Elvis alive - truly,” Priscilla Presley told the audience before fans began the walk to Meditation Garden to pay their respects.


“I love Elvis,” said Omni vocalist/bass player Philip Frobos. “I mean, there’s so many things to love about Elvis, but I really love his minimal ballads a lot.”


Frobos and his band, which includes guitarist Frankie Broyles and drummer Doug Bleichner, were in town Aug. 9 to perform at Growlers.


His girlfriend recently sent him the box set of Elvis recordings, “A Boy from Tupelo - The Complete 1953-55 Recordings,” Frobos said. “It’s some really great stripped-down versions of ‘Blue Moon’ and ‘I Love You Because.’ and stuff like that. But I also really like his Hank Williams cover of ‘Trying to Get to You.’ I even love that special where he’s wearing the black leather.”


Frobos began playing bass when he was 14. “I remember saying I would probably never learn a musical instrument or anything like that, which is weird. I was a soccer player. It was kind of my main thing.”


But he stopped playing soccer. “That kind of happened at the time I started dating girls, too. So, it’s like, ‘Music and girls are a lot more fun than waking up at 6 a.m. and running around.’”


Asked how Omni began, Frobos said he and Broyles “would write songs around the house” when they were in their own bands. Frobos was in Carnivores and Broyles was in Balkans and, later, Deerhunter. “But, really, Omni happened, I suppose, after we had written a song that sounded more like proto-punk. And we kind of liked where we went with that and followed that idea.”


The band originally was called “Land Line,” but, Frobos said, “We decided to change it to ‘Omni’ because there’s another ‘Land Line’ in Portland. We named it after the Omni Coliseum in Atlanta. It’s no longer there, but it’s where the Atlanta Hawks played basketball. And David Bowie and Led Zeppelin played there all the time.”


As for their music style when they began, Frobos said, “I don’t think we set out to do any kind of thing, but at the time we were listening to a lot of late ‘70s early rock music. So, rock and roll with a new wave influence. Rock and roll with a sense of urgency. Not necessarily punk, but rhythmic, too.”


They recorded their first album, “Deluxe,” with Trouble in Mind records in January, 2016. “The second one comes out this September. It’s called ‘Multi-task.’ I would say it seems a little more rock and roll than the first record. We definitely don’t want to repeat ourselves. But, also, I’ve never been a fan of people just abandoning their sounds. (It’s) just good rock songs. I think we tend to not be afraid to do things that some people might consider cheesy. Or bigger guitar and drums moments. A little more space in the songs and things like that.”


Frobos, who writes the lyrics to their songs, said, “I would say this new record is a lot of disenchantment and stemming from maybe just common everyday social experiences. I was in a pretty terrible relationship, so there was a lot of anger coming from that. But it doesn’t come out as anger. It comes out as clever.” 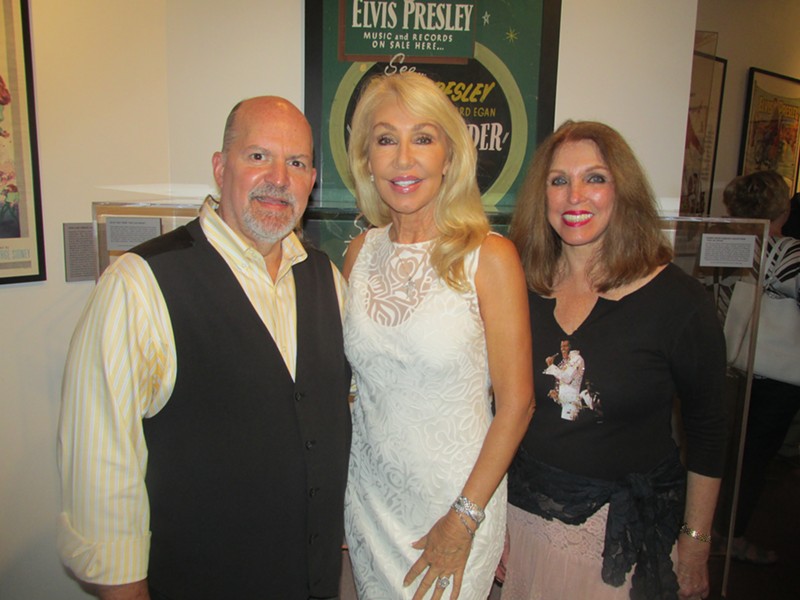 
Fans packed Memphis Rock N’ Soul Museum Aug. 13 to meet Linda Thompson and have her sign copies of her book, “A Little Thing Called Life: On Loving Elvis Presley, Bruce Jenner, and Songs in Between.”


The book recounts the years Thompson spent with Elvis and her marriage to Bruce Jenner, now Caitlyn Jenner.


The King’s first words to Thompson after he noticed her at the old Memphian theater were, “Oh, hello, honey.”


Thompson presented an award to Jenner at a charity event in 1979. They began dating and were married in 1981. Thompson never suspected Jenner was transgender.


They don’t do a lot of book signings at the museum, but, Doyle said,, “She was such a big draw and, obviously, the Elvis fans that are in town know her, respect her and appreciate her involvement in Elvis’s life. Needless to say, there was almost a guaranteed audience for that.


“Elvis Week presents that unique opportunity because the tourists that are here are very focused on anything associated with Elvis and his career and his life. An opportunity to have her in town and participate in a book signing with her is a great opportunity to tie in with the cool things that Graceland is doing.”

Tigerlake and Mellowtonin performed Aug. 8 at Fam Jam at Railgarten.


The band also includes Wallace Leopard and Lucas Davis on guitar, Gary Leopard on drums and Jacob Tims on synthesizer and guitar.


All the band members write the songs, including “Moon Man,” the group’s most popular song. “It’s about this guy and girl in a moon colony,” Rone said. “And she has to leave and he’s sad. She’s leaving to go back to Earth or somewhere else. I’m not exactly sure.”


Asked where “Tigerlake” came from, Rone said, “I was driving in Florida and I saw it. It’s like a county or something in Florida near Pensacola. I was like, ‘That’s a cool name. Guys, let’s do that.’”


Mellowtonin got its name sort of by accident. “We thought we were going to be a band for one show, so we kind of made it as a joke name,” said guitarist/vocalist Wesley Wolffe. “We played our first show and we liked it.”


As for their music style, Wolffe said, “We have three or four different songwriters in the band. I listen to a lot of ‘80s music. Emerson, the other guitar player and singer, likes pop punk and stuff. All the different styles meld into one. So, you can’t put your finger on it.”


They liked Railgarten. “We normally play at our friends’ houses and stuff like that. That was definitely the nicest venue we’ve ever played. We really liked the setup and how nice the stage looked.”


Rone also liked Railgarten. “I really enjoy the space. A lot of people there. It’s a great environment for people to go watch live music for free, which I think is just dandy. It’s a very, very family friendly place.” 
Lisa Morgan, former owner of The Cottage restaurant on Summer, held a soft opening for her new business, Lisamorgan, a boutique in Wolfchase Galleria.


The event included a fashion show hosted by Glen Allen and Jenni Graham of apparel by designers featured at the shop.


Asked why she wanted to open a boutique, Morgan said, “I wanted one for a couple of years and I couldn’t do it. Morgan (Prewett, her daughter) is into fashion and modeling, so I thought it would be good for her as well.”


On hand at the event was Lisa’s father, Billy Franks, who owned The Cottage from 2009 to 2012 before Lisa took it over. Since the store’s party coincided with Billy’s birthday, guests treated him to a rousing rendition of “Happy Birthday to You.”

Slideshow Elvis in the house