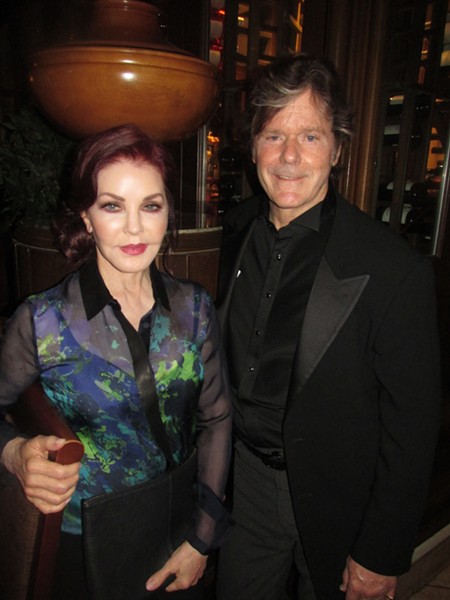 Jerry Schilling loves Memphis.
Schilling, who was a close friend and business associate of Elvis, was in town to participate in Elvis Week events.


“I think Memphis is different,” he said. “And I think it’s in the water in the Mississippi River. It’s where it all came together with all the styles of music and with the geniuses like Sam Phillips and Dewey Phillips, who got it. And Elvis Presley, who put it all together and basically kicked the door in for rock and roll.


“I am very proud to be a part of this city with its great musical heritage both black and white. When I came back to be president of the Memphis & Shelby County Music Commission, I walked down Beale Street and looked at every note on Beale Street and I saw friends, people I idolized and I didn’t know. And for me to have the 66th note on Beale Street was the ultimate. I live in Hollywood, but my soul is in Memphis.”


Among his current projects is the Cinemax series “Quarry.” “I’m a consultant on that,” he said. “It takes place in Memphis in the ‘70s. It’s not about Elvis at all. It’s about two Vietnam soldiers coming back to Memphis and having a hard time getting a job. And they become hit men. We use a lot of Memphis music. A lot of David Porter.”


Schilling is an executive producer along with Priscilla Presley on the upcoming HBO documentary, “Elvis Presley: The Searcher,” slated to air in 2018. “We have finished the program now. I did come come to Memphis over two years ago with Kari Antholis. He’s the head of series programs at HBO. We did a whole research thing for the show. We met with David Porter. David is one of the voiceovers in the documentary. And we used some of his music.”

seventh grade field trip to Memphis. From L. A. They went to Graceland and the Civil Rights Museum. They did everything.”


And, Schilling said, “I’m back managing the Beach Boys after 30 years.”
He was the Beach Boys’ manager for 10 years. “I love their more deeper music. I love it all, but I think there’s a lot more obscure Beach Boys music I wasn’t familiar with in the beginning. We all know ‘Good Vibrations,’ the car songs.”
He particularly likes “Warmth of the Sun” and “Feel Flows.”

TV’s “Hell’s Kitchen,” “Chopped” and “Throwdown! With Bobby Flay” have nothing on the Aug. 19th boxing match between Restaurant Iris/Second Line chef/owner Kelly English and Los Tortugas chef Jonathan Magallanes at Phoenix Club’s “Fight Night” fundraiser. The Boys and Girls of Greater Memphis benefit was held Aug. 19 at the University Club of Memphis .


“John Collier, who put on the event, asked if I would be willing to fight Kelly,” Jonathan said. “We’re good enough friends we could put aside our love of each for a good cause and trade blows.”


In addition to punching each other, the two chefs added some verbal jabs. “I told him that I had better Cajun food at Popeye’s in Ecuador,” Magallanes said. “And that Applebee’s was better than the Second Line. And he said that cheese and sour cream do belong on tacos. We don’t do that.”


He described the comments as “little jabs on cuisine and food as a way to get each other riled.”


Magallanes didn’t train for the event, but English did. He worked with trainer Nick Davis for six months.

When Collier asked him to fight, English said, “You’ve got to get me a chef. I’ll fight a chef. I feel like that’s a fun draw.”


Collier came back and saId, ‘We got Jonathan.” To which English responded, “You got Adonis? LIke 6-4. Born in perfect fashion. Like chiseled.”


English won the event - best of three two-minute rounds - by a unanimous decision. “If Jonathan had trained, he would have been an insane opponent,” English said.


“It was all in good fun,” Magallanes said. “We’re real bro’s. We’re able to fight and put it aside.” 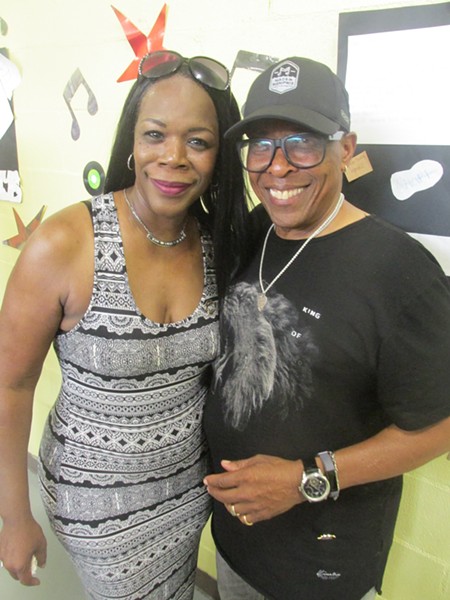 
Isaac Hayes was honored in his home-town of Covington, Tenn. Aug. 19 at Frazier Park. Family and friends gathered at “Isaac Hayes Day in the Park” to remember Hayes and to listen to some of his music.


His daughter, Veronica Hayes, who attended with her sister, Melanie Hayes, described the gathering as “the inaugural event to celebrate my dad.”

The Class of 1977 Revue performed Isaac’s hits, including “Soul Man,” which he co-wrote with David Porter. Porter was among the guests.


Veronica brought three of her father’s BMI awards - two for “Shaft” and one for “Deja Vu” - to the Tipton County Museum to coincide with the event, which was organized by John Edwards.


Veronica plans to get more involved next year. “I think I’m going to throw my hat in there and help them out,” she said.


She'd like to raise money from the event to provide scholarships and give money to high school music departments.

Brett Healey won the “Meatball Eating Contest” at the Monroe Ave. Festival Aug. 20 in front of Bardog Tavern. He was the first contestant to finish 40 meatballs. He finished in 13 minutes and 14 seconds, which beat the previous record of about 15 minutes. The annual event follows the annual Breakaway
Bardog 5K to benefit St. Jude Children’s Research Hospital.


Healey, who was born in Hamilton, New Jersey, moved to Memphis two months ago. He got hooked on competitive eating in New Jersey. “There was a burger challenge at a restaurant where I used to work in New Jersey. That was a two-pound burger plus one pound topping. So, a total of a three-pound burger. You had 30 minutes to eat it. And I finished it in 24 minutes.”
His secret is “working out a lot, eating a lot of fruit and vegetables and water to stretch my stomach out.”


Healey already is hungry for his next challenge. “I have been approved to do the Moonpie eating contest in October at The Pyramid.”


A group got together to open the bookstore after The Booksellers at Laurelwood decided to close its doors.

“As a customer, I think it’s important for the city to have an independent bookstore,” said John Vergos, a managing partner along with Christy Yarbro and Matt Crowe. “I already knew there was a strong base of support. I went there almost every day. I thought I could help round up some people. By the time we were through, there were other people of like mind to put it together.”


Asked how the bookstore’s name originated, John said, “Nicole Yasinsky said if she could open the perfect bookstore that would be the name she’d choose. It resonated with everybody and we kept it.”
Libra, the store's restaurant, is slated to open in early September.


“It’s our goal to keep it full of books. And our goal is for it to be sustainable. We expect to see this place still there in 20 years.” 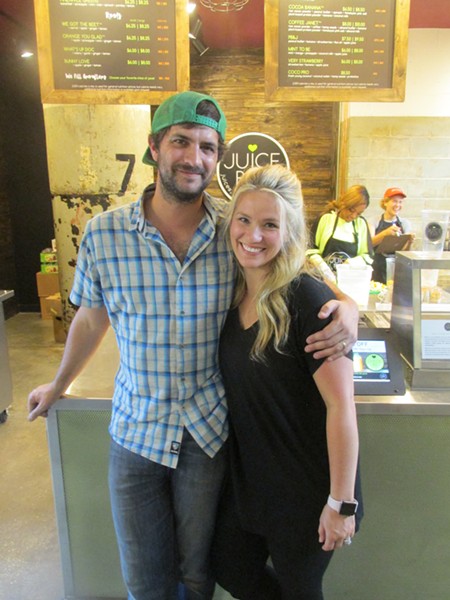 Owners Scott and Rebekah Tashie were on hand for the I Love Juice Bar soft opening Aug. 16 at Crosstown Complex.


Among the fresh-made juices are Orange you Glad, We’ve Got the Beet and Sweet Greens.

Loflin Yard held a soft opening of its new menu items Aug. 16. The culinary items, which currently are available, will officially be featured on 901 Day - Sept. 1. People will celebrate all things Memphis on that day.


These are dishes people can share “that we didn’t have before, geared to an Austin, Texas-style barbecue,” said Matthew Stachowski, Loflin Yard executive chef. “Our main focus is brisket. We’re trying to have the best brisket in Memphis.”


Tyler Clancy, owner of Clancy’s Cafe in Red Banks, Miss. was among the contestants in the Operation BBQ Relief Mississippi State Challenge.


Asked the secret to grilling a great steak, Clancy said, “Do not overcook it.”

Organization members are “first responders in times of need and natural disaster,” Lambert said. “People from all walks of life come together and pull resources, pull equipment and travel anywhere in the country where there is a centralized, large relief effort to feed victims.”


Asked how many contestants were from Memphis, Lambert said, “probably about 65 percent of our teams are local, Mid-South area.”


Everyone was required to turn in one ribeye steak, Lambert said. “We provide two un-trimmed ribeye steaks. Trim it as necessary before it’s cooked. They have to cook that steak and turn it in in a box with nothing else. A steak in a box. The have a 30-minute window to turn that in. So, they can take as long as they need to trim it, marinate it, do whatever they need.”


They also can - perhaps nervously - eat the other steak and share it with friends while waiting for the winner to be announced. 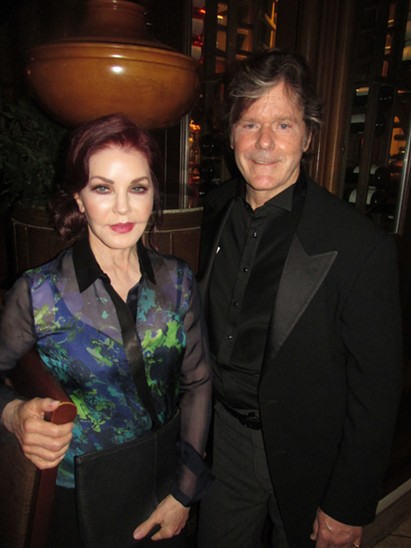 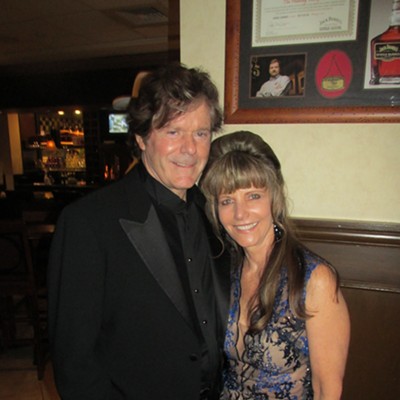